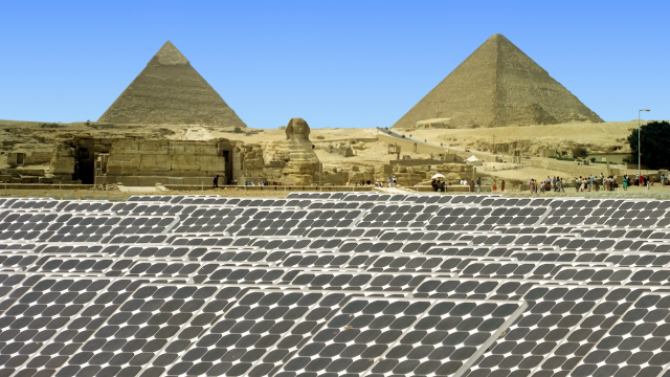 The Egyptian government has a clear vision to ensure energy security. In 2014, it initiated reforms to improve the sector’s operational and financial performance, attract private investment, and expand renewable energy sources. It partnered with development banks, including the World Bank Group, which provided a wide range of technical and financial support that strengthened investor confidence and mobilized $2 billion of private investment in renewable energy.

The country has historically been reliant on fossil fuels for electricity, and the market for low-cost renewable energy was underdeveloped, without clear business models and practices to make energy more reliable and more affordable for citizens. In 2013, fuel subsidies were high at seven percent of gross domestic product—more than the combined government spending on social protection, health and education—and were not targeted at the poorest. Long periods of underinvestment in the energy sector transitioned the country from an energy exporter in 2009 to an energy importer by 2014. There were severe power shortages from 2012 to 2014, which contributed to social unrest.

To achieve its energy security goals of generating 20 percent of its electricity from renewable resources by 2022, Egypt embarked on a major restructuring of the sector’s institutions and regulation, with a focus on attracting private capital to build renewable energy sources. The World Bank Group responded by supporting the government’s reforms through risk-informed and sequenced interventions that focused on policy and institutional issues. It also coordinated international financing and guarantees that enabled private companies to invest in the country’s energy infrastructure.

In 2014, the government initiated its strategy for the energy sector, which prioritized energy security, sustainability and governance, and private sector investment. The World Bank Group, the European Union as well as other local and international experts collaborated to support the preparation of the strategy, and subsequently, the government requested the World Bank Group’s assistance to implement it.

As part of Egypt’s economic reforms that were supported by the World Bank Group, the government introduced a solar Feed-in-Tariff (FiT) program to leverage private sector capital and expertise to support the country’s energy goal. An important part of the program is the Benban Solar Park, which will be the world’s largest solar installation when completed.

The government worked with IFC and the European Bank for Reconstruction and Development (EBRD) to prepare contracts for the FiT program and reach out to investors. In 2017, IFC finalized a $653 million debt package to finance the construction of 13 solar power plants as part of the Benban Solar Park. The power plants will generate up to 752 megawatts of cost-effective and eco-friendly power and is expected to supply power to over 350,000 residential customers and generate up to 6,000 jobs during construction.

IFC gathered a consortium of nine international banks, which are investing for the first time in Egypt’s renewable energy sector. The consortium includes the African Development Bank, the Asian Infrastructure Investment Bank, the Arab Bank of Bahrain, CDC of the United Kingdom, Europe Arab Bank, Green for Growth Fund, FinnFund, ICBC, and OeEB of Austria. Together with IFC, their financing will support six groups of private power companies.

The budgetary efficiencies gained through the energy reforms not only provided a better enabling environment for the private sector, they also freed up fiscal space for spending in social sectors, and improved targeting of subsidies toward groups that need them most. Before the energy tariff subsidy reform, the richest 20 percent of the population benefited from 60 percent of fuel subsidies; the savings from subsidy reforms enabled doubling of budgetary spending this year on social protection for the poorest 20 percent of the population.

The Benban Solar Park is contributing to Egypt’s clean energy security and will help boost economic growth. It has attracted numerous private investors and opened the market to commercial lenders, many of whom are investing for the first time in Egypt and are broadening the capital base for future power sector investments.

World Bank Group efforts have been complemented by other development partners. EBRD has approved projects that will deliver 750 megawatts of solar photovoltaic capacity. EBRD, the Agence Française de Développement, the European Investment Bank and the European Union have also launched a €140 million Green Economy Financing Facility for Egypt to provide loans for small-scale renewable energy investments by private companies through a group of participating banks.

IBRD supported policy action in electricity tariff and subsidy management, as well as introduction of a renewable energy law through a development policy loan.