Perseverance in the Face of Naysayers – Q&As with Viraj Vithoontien 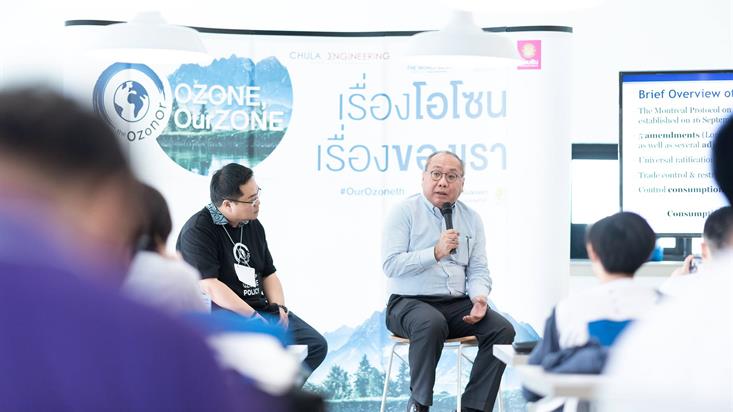 Viraj Vithoontien (VV): I am currently a lead environment specialist in something pretty unique for the World Bank – ozone protection with climate benefits. I therefore get to coordinate the East Asia and Pacific Region portfolio of projects on the implementation of the Montreal Protocol on Substances that Deplete the Ozone Layer – in the region where most of the Bank’s Montreal Protocol (MP) work takes place.   I also serve as the lead technical negotiator for new MP project approvals where my mechanical engineering degrees as well as the 30 years of experience in the refrigeration and air-conditioning sectors come in handy.   In fact, my 24 years with the World Bank have been primarily focused on support to developing countries for the implementation of, and compliance with the Protocol.  Coming from one of these countries, Thailand, I had the opportunity to also learn the ropes through the lens of the client in the early years of my career where I worked in the Department of Industrial Works that serves as the country’s “national ozone unit.”

2.     Did you know growing up that you would work on environmental issues? What triggered your interest in this area?

3.     What was the most surprising story you’ve witnessed working on climate change?

VV: That the Montreal Protocol, in eliminating ozone depleting substances, has done more to protect the climate than any other concerted action or convention, including Kyoto and the Climate accords! It’s understood that these substances also have high global warming potential but the cumulative climate impact of their elimination – nearly 135 billion tons CO2 equivalent by 2013 through the first phase of implementation – is impressive to hear!

4.     How did you end up working on Thailand’s environmental issues with the Bank?

VV: I was introduced to the ozone layer protection issue by my college friend at the Ministry of Industry in 1990 (six months after Thailand ratified the Montreal Protocol).  At that time the Bank was assisting Thailand prepare a country program for implementation of the Montreal Protocol.   I then worked as a Bank consultant for three years to assist Thailand develop its first ozone depleting substance (ODS) phase-out project until 1993 when I joined the UNEP Regional Office for Asia and the Pacific to manage the first network of national ozone officers for the region.  In 1996, I got an offer from the Bank to join its Montreal Protocol Coordination Unit in Washington.  Because of my experience in the Southeast Asia region, I was assigned to provide technical backstopping to our operations teams in East Asia.  Since then, I have been involved with Bank MP projects in East Asia including Thailand.

5.     Was there a significant moment where you felt all your efforts were worth it?

VV: There were a few.  I will take two examples from Thailand given that it has been a strong World Bank partner and an incubator of sorts for innovative MP approaches and projects.  More than 20 years ago, the MP Multilateral Fund and the Global Environment Facility (GEF) approved the building air-conditioner (chiller) replacement project in Thailand.  It was the first project of its kind in many different ways.  However, the most important was that it deliberately took advantage of a key linkage between ozone layer and climate protection that presents itself in refrigeration and air-conditioning equipment:  the project replaced global warming, ozone depleting refrigerants with ozone-friendly refrigerants while introducing much more energy efficient chillers.  This import linkage was formally reflected in the 2016 Kigali Amendment to the Montreal Protocol which will now eliminate a non-ODS substitute that happens to also be a potent greenhouse gas used primarily in these cooling applications.

The other example was to develop the first performance-based, programmatic approach for phase out of ODS consumption in accordance with Protocol requirements. This approach, introduced for Thailand (and Malaysia) in 2000, fundamentally changed the Multilateral Fund’s funding paradigm that had focused on stand-alone projects.  Instead, funding for investments and policy was to be released in tranches against gradual, verified reduction of national-level ODS consumption.  Since approval of this approach for, and subsequent results in Thailand (cost-effective and faster phase-out), the Fund has adopted this delivery mechanism for most developing countries.

6.     What has been your biggest achievement and biggest challenge working on this issue in Thailand?

VV: The biggest challenge and biggest achievement both stem from the recent MP project to transform the air-conditioning market in Thailand from using the last remaining ODS, hydrochlorofluorocarbon (HCFC) as a refrigerant.  At the beginning, it was extremely challenging as the alternative refrigerant had not been employed anywhere in the world.  The Thai air-conditioning industry was asked to be one of the first to adopt this technology and both local and multinational air-conditioner manufacturers were highly skeptical.  Most preferred to transition to a known, but high global warming refrigerant technology.  With strong Government commitment to phase-out HCFC-based air conditioners and persistent efforts from the Bank as a broker of impartial, technical information, local manufacturers agreed to participate in the project, which eventually leveraged change at multinational companies.  Throughout implementation, however, there were many issues to deal with – from new safety regulations and standards to ensuring a supply of needed components.  The Bank in coordination with Thailand’s National Ozone Unit consulted heavily with relevant parties in both the public and private sectors to overcome these challenges.  Eventually the whole market was transformed to more climate friendly technology while giving local industry a competitive edge as this new technology penetrates markets the world-over.  For me, the biggest achievement though was the trust that the Bank earned from the Government and the industry.  It was a very rewarding experience for the team and me, and the long Thailand-World Bank MP partnership is stronger than ever.

7.     Do you have any tips or life hacks for making our life and work more ozone friendly?

VV: When buying appliances (refrigerators, air-conditioners), please ask for those products that have high energy performance rating and do not use hydrochlorofluorocarbon (HCFC) or hydrofluorocarbon (HFC) refrigerant.

Make sure that your appliances have regular preventive maintenance (if there is no refrigerant leakage, there is no harm to environment).

Set the temperature of air-conditioners at 78 degrees Fahrenheit or 25 degrees Celsius; every degree of extra cooling before this level will increase energy consumption by 6–8%.

Use cooling fan (ceiling fan) in combination with air-conditioners could help distribute cool air and the breeze can give the feeling that it is several degrees cooler than it actually is.