MANI, May 14, 2019 — On the outskirts of a village close to Lake Chad, an unusual scene captures the attention of visitors. Under the blazing sun, a royal blue tractor, driven by two young women dressed in overalls in the same hue, moves back and forth over a field, leaving a cloud of dust in its wake. Adorned with an inscription in white letters—“Economic Empowerment of Women and Young Girls”—this brand new tractor is far more than just a commercial vehicle. It is, above all, a symbol of emancipation.  Welcome to Mani, a village of 4,000 inhabitants located 75 km from the capital, N’Djamena, where women make their voices heard and take charge of their own destiny.

In this region plagued by extreme poverty, this gleaming vehicle, provided to women’s groups through the International Development Association (IDA)-financed Sahel Women’s Empowerment and Demographic Dividend Project (SWEDD), is transforming the lives of women in the village. Baba Sultan Brahim, the president of the Mani women’s group, declares emphatically, “Before, no one took our work in the field seriously, but since we got a tractor to plow our fields and mills to process our crops, a woman is no longer just a woman, but rather twice as effective as a man.” 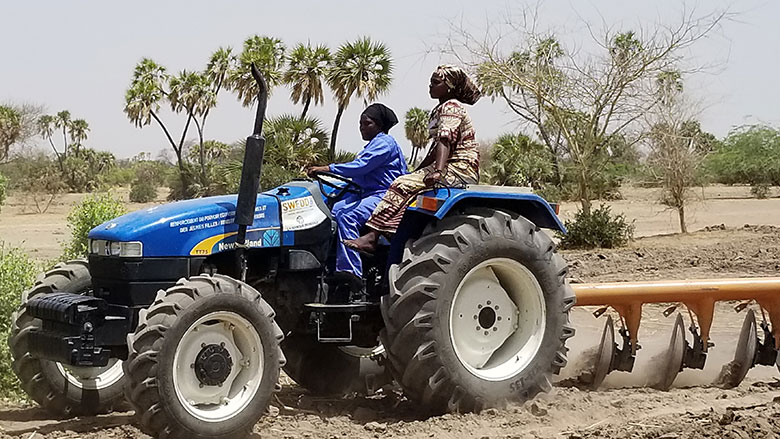 Earning CFAF 2,000 per hectare plowed (around $3.40), the female tractor drivers of Mani have acquired a certain notoriety beyond the village limits. Copyright: Anne Senges, World Bank

Baba Sultan Brahim’s enthusiasm appears to be contagious. “We are truly free, and as long as the tractor is working and helping us generate some income, there’s no going back,” states Aminatou Abouna, one of the women driving this life-altering vehicle,  while explaining that she had also completed training on maintaining the tractor in good working condition.  Having learned to drive last September as part of the SWEDD project, Aminatou confesses that she never dreamed of one day driving a tractor. Today, Aminatou and nine other women from the village are using their expertise to benefit the community while earning a living from the income generated by this tractor (which they sometimes rent to the men). Earning CFAF 2,000 per hectare plowed (around $3.40), the female tractor drivers of Mani have acquired a certain notoriety beyond the village limits. And there’s no turning back.

This tractor also symbolizes the challenge facing the project in the four regions of Chad in which it is being implemented. “In the beginning, we did not consider buying a tractor for the female farmers,” states Youssouf Awaré, coordinator of the SWEDD. “We were counting on the men to help the women and work their fields, but sociocultural and religious pressures were such that the men were in no hurry to assist women with their field labor, leading to considerable delays in launching the activities of the women’s groups,” he notes.

The SWEDD has been implemented in five Sahelian countries (Burkina Faso, Chad, Mali, Mauritania, and Niger) as well as in Benin and Côte d’Ivoire. Financed by the World Bank to the tune of $295 million and implemented by NGOs under the supervision of sectoral ministries, with support from the United Nations Population Fund (UNFPA), the project has posted such promising results that it will be scaled up in the current countries as well as in other countries in Africa. In Chad, over 13,000 vulnerable girls have received support (e.g., school kits, housing, payment of school fees, academic support). In three regions (Lac, Kanem, and Salamat), initiatives financed by the project have contributed to a 23% increase in the number of girls attending secondary school, while the dropout rate has been cut in half. At the same time, 397 safe spaces in schools were created (targeting thousands of adolescent girls), 168 women received training in renewable energies, and another 112 women were trained in the operation and maintenance of heavy agricultural machinery. 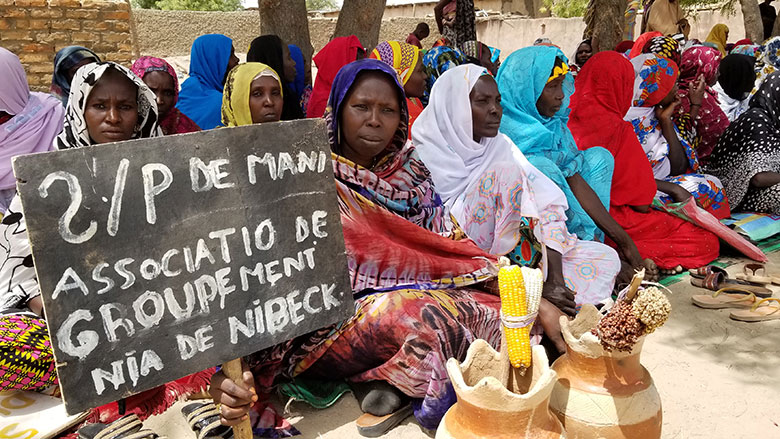 In Mani, the women’s empowerment strategy extends to other activities.  It is not unusual to see young women dressed in blue overalls with yellow hard hats firmly in place on their heads, perched on the roofs of houses installing satellite dishes, solar panels, or even power cables. A divorced mother of two, Djéné Saleh, like hundreds of other young women across the country, has recently completed training to become an electrician and is passionate about her new career. “I used to be a housewife, and I left school after my marriage failed. Now, the training I’ve received has given me a lot of hope because I can expect to earn a decent living,” declares the young woman as she designs an electrical circuit. 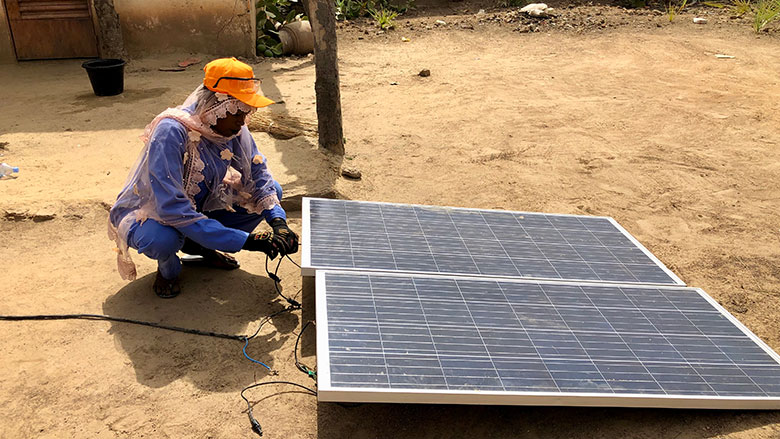 A divorced mother of two, Djéné Saleh, like hundreds of other young women across the country, has recently completed training to become an electrician. Copyright: Anne Senges, World Bank

Out-of-school adolescent girls from impoverished homes are also among the project beneficiaries. In Mani, around 30 young girls are now being accommodated in a shelter next to the high school where they are fed, housed, and educated. Fifteen-year-old Amina, a resident at the shelter, dreams of being a lawyer; another of her schoolmates wants to be a mathematician--careers that were once beyond the aspirations of young girls. All these girls share a common mission--they campaign fiercely against child marriage, which, in their view, remains the main obstacle to girls’ empowerment. Safe spaces have also been established within the community, with the goal of allowing adolescent girls from the village to get together three times a week to discuss issues that are private and sometimes taboo in the community, such as puberty, reproductive health, family planning, and the distribution of household tasks. 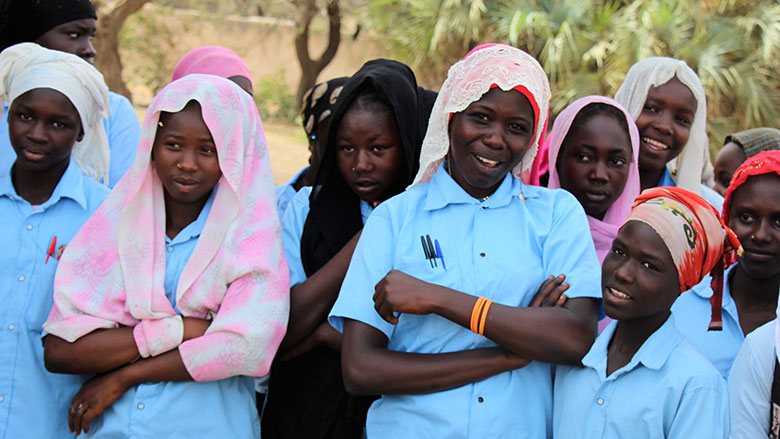 The young residents in front of the Mani’s girls shelter. In Chad, the SWEDD has created around 24 shelters like this one. Overall, more than 13 000 vulnerable young girls benefited from project support in the form of school kits, accommodation, payment of school fees and tutoring. Copyright: Anne Senges, World Bank

Among the most passionate advocates for women’s empowerment in Mani is Haroune Bahar Brahim, the village sultan. “A lot has changed in Mani, because when you see women driving a tractor and repairing electrical lines, you can say that we have emerged from the shadows,” he concludes. 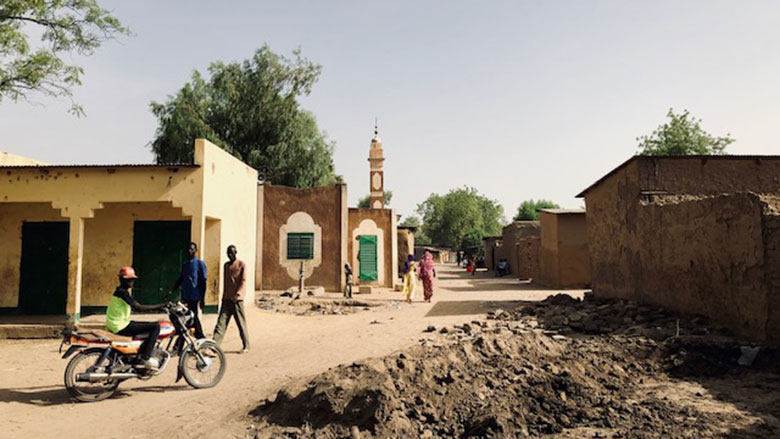 View of the Mani Mosque where the majority of the population is Muslim. Women's empowerment activities have gained the support of all religious and traditional leaders. Copyright: Edmond Dingamhoudou, World Bank