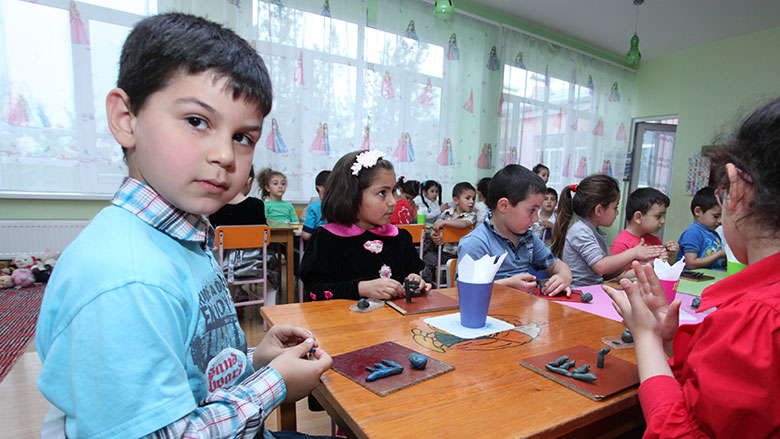 One of the results of this project is the creation of preschool classes in 380 rural communities and a 20 percent increased enrollment of 5–6-year-olds in preschool education.

World Bank Group support has had a transformational impact on Armenia’s development. New technology centers and a venture capital fund contributed to increasing the GDP share of Armenia’s IT sector from 1.5 percent in 2010 to nearly 7.5 percent in 2018. World Bank Group operations have spurred roughly US$1 billion in private investment in the energy sector. Enhanced access to social services has benefitted around 2 million people in remote areas.

Armenia made significant progress in reducing poverty from a peak of close to 54 percent in 2004 to 25.7 percent in 2017, due largely to double-digit growth in the early 2000s. However, poverty reduction slowed considerably following the 2008–09 global financial crisis, when Armenia’s economy contracted by over 14 percent and the poverty incidence bumped back up to 35.8 percent, indicating that the preceding growth period had been neither inclusive nor sustainable. Armenia managed to weather the impact of the 2014 Russia crisis, but its vulnerability to external economic conditions and low level of export diversification have remained important obstacles to further growth.

The country’s unemployment rate, at 17.7 percent (2018), is among the highest in Europe and Central Asia, stemming largely from low job creation and a mismatch between workers’ skills and available jobs. Armenia faces tremendous challenges in diversifying its economy, addressing regional disparities, and enhancing the quality and coverage of education, health, and social services. Concerns include low productivity in almost all economic sectors, poor social and economic infrastructure, reduced fiscal space, and ineffective public administration. The population is aging, and many young people are leaving in search of better opportunities.

As a landlocked country held back by geopolitical constraints and demographic challenges, Armenia requires a decisive shift to a new economic model for inclusive, resilient growth through economic diversification, enhanced connectivity, and strengthened institutions and socioeconomic infrastructure. The new Government is trying to address these challenges to enable a rebalancing from domestic demand to higher productivity and export orientation.

The historical drivers of poverty reduction and shared prosperity in Armenia—remittances, social transfers, and foreign direct investment in the construction sector, which generated demand for low-skilled workers—have become less effective since the 2008–09 global financial crisis. The World Bank Group is supporting Armenia’s effort to build a new, more inclusive growth model and seeking to catalyze development and private sector partners around high-priority projects. The viability of this approach is anchored around the “One World Bank Group” e.g. the IBRD set the stage through upstream policy support which allowed IFC and MIGA to crowd in private sector investments principle of engagement.

The Bank has used a mix of new instruments (including Program for Results (a development financing instrument which links disbursement to achievement of tangible results in support of government programs), guarantees, and analytical work) that have helped build substantial private sector interest in the energy sector and identified innovative development solutions customized to Armenia’s context, including an Information Technology (IT) venture fund, regional technology centers, interactive learning and innovation labs in tertiary education institutions, and efficient preschool services.

As of August 1, 2019, the IDA/IBRD lending portfolio in Armenia consisted of 13 active projects, with a total commitment of US$563.6 million (including IBRD loans of US$482.7 million and IDA funds amounting to of US$80.8 million) in sectors such as education, health, social protection, roads, energy, water, agriculture, rural development, tourism, and finance.

The trust fund portfolio includes 31 activities: nine recipient-executed and 22 Bank-executed projects totaling US$29.2 million. Most are funded by multi-donor trust funds, including the European Union and the Russian Federation, and support analytical and technical assistance programs, innovation pilots, and the preparation of new lending operations or provide complementary financing to ongoing projects.

World Bank Group support in Armenia has achieved successful results primarily because of its close cooperation with the Government of Armenia and other development partners.

An important lesson drawn from the Country Partnership Strategy for Fiscal Year 14–17 was that “engaging steadily with development partners across investment operations, supported by analytical work and policy dialogue, helps to leverage partners’ resources for maximum impact.”

The World Bank Group will continue to support Armenia in strengthening the resilience and inclusiveness of its growth model. The Country Partnership Framework (CPF) for FY19–23 includes three interrelated and mutually reinforcing focus areas that support the twin goals of eliminating extreme poverty and promoting shared prosperity.

Focus Area 1, boosting export enablers and firm competitiveness, is expected to lead to more job creation through enhanced private sector participation and exports, notably in sectors that can extend externally oriented growth to those who have been excluded thus far, particularly in remote regions.

Focus Area 2, enhancing human capital and equity, will support the development of human capital and skills to boost labor productivity and more inclusive labor market participation while expanding social assistance coverage to those most in need.

By supporting improved environmental and natural resource management, Focus Area 3 will help strengthen the resilience and livelihoods of low-income populations that depend on agriculture and are thus highly vulnerable to climate change, and will also support the competitiveness of job-creating, nature-dependent sectors such as agriculture and tourism.

The CPF will also explore the benefits that digital solutions could bring to each focus area. (Source: Armenia CPF for FY19–23)

In the Shirak region, the Gyumri Technology Center (GTC), established in 2014 with support from the World Bank’s E-Society and Innovation for Competitiveness project, has been highly successful. The GTC houses 28 companies with over 200 employees and up to 2,000 students and has business connections with over 10 countries. It is not a local phenomenon but a regional IT hub. The Vanadzor Technology Center consistently follows the same path to success.

Both technology centers empower regional development beyond the capital city and support the development of the IT industry in the provinces. The right mix of skills and talent is being created locally and nationally through economically and socially rewarding investments.

Vahe Aloyan is a 16-year-old high school student and works for the company, X-Tech. A true polyglot, he knows eight programming languages. At the age of 14, Vahe designed his first game and won a contest organized by the Vanadzor Technology Center. His second game won an award for best design.

“My desire is to work for a company that produces only games,” Vahe says. “But my biggest dream is to see the gaming industry in Armenia fully developed and supporting the economy.”

The website of the World Bank Office in Armenia offers in depth information on all projects and programs in the country.

To help Armenia boost economic growth and improve the lives of all citizens, the World Bank Group has developed a new four-year (2019-2023) Partnership Strategy
Video: “My Future Armenia. Green and Modern”

During the preparation of the CPF, the World Bank Group held extensive consultations with the government, private sector, development partners and civil society. This is what people told us.
Video: “If I were the World Bank”