The European Investment Bank, the World Bank Group* and the European Bank for Reconstruction and Development have delivered a crucial lifeline to the economies of central and south-eastern Europe with a financial package that provided much-needed funding and contributed to stability in the face of major economic challenges.

The three institutions launched their Joint IFI Action Plan (JIAP) for Growth for the region in November 2012, when recovery from the global crisis was under threat and funding from abroad was drying up.

With a pledge to provide support of at least €30 billion by the end of 2014, they aimed to stabilise financial systems in the region and ensure that finance kept flowing to key economic sectors.

By the end of July 2014, the three international financial institutions (IFIs) had already overtaken their target with joint financing of €33.6 billion, and were still investing strongly in the region. All three IFIs plan to provide continued financing as needed.

In addition, the IFIs’ joint work on the initiative has provided a solid base for further cooperation that is already being applied beyond the JIAP region, for example, in providing financial support to Ukraine.

The President of the European Investment Bank, Werner Hoyer, commented: “The programme has made a huge contribution to the overall financing of the countries of central and south-eastern Europe and to many hundreds of projects which are crucial to the strengthening and transformation of their economies. The EIB has provided under the joint initiative more than €20 billion, which underlines the strong commitment by the EU Bank to support the region. It also leaves a legacy of cooperation between the three IFIs that should endure and help them serve better the needs of the countries where they are active.”

Laura Tuck, World Bank Vice President for Europe and Central Asia, emphasised that “The Joint IFI Action Plan has been critical in ensuring continuous external funding for governments and the financial sector in central and south-eastern Europe, amid geopolitical uncertainty and timid economic recovery. Since the beginning of the year, the contribution of the World Bank Group has increased by over €3 billion in support of broad policy reforms and investments that promote competitiveness, job-friendly growth and social inclusion. For example, the World Bank is supporting reforms to the governance framework of state-owned enterprises and the liberalisation of wholesale energy markets in Romania. Moreover, in Poland, a series of Development Policy Loans has helped to improve the efficiency of the country’s social assistance programs and to increase the last-resort minimum income benefits for vulnerable households. We have also supported the government’s long-term institutional reform efforts and structural reforms to the budget, labour and financial markets, and encouraged private-sector innovation.”

“Working alongside our partners, IFC has been supporting the private sector through investments and advisory services in infrastructure, manufacturing, agribusiness, services and trade,” said Dimitris Tsitsiragos, IFC Vice President. “We took steps to help ensure that the banks operating in the region are adequately financed by providing long-term funding and equity, so that finance continues to flow to businesses and people that need it. IFC also helped set up Distressed Assets Recovery Programs that are helping to clear up the non-performing loans which plague the region.”

EBRD President Sir Suma Chakrabarti said: “At this time of heightened political uncertainty, investments from the IFIs to shore up energy security have assumed a particular importance in addition to the crucial steps that have been taken to ensure a flow of credit to the real economy. This support will remain in place as we continue to reach out collectively to support and strengthen the economies of the region.”

The plan prioritised funding to small- and medium-sized enterprises (SMEs) that are key to job creation and innovation in Europe, filling a financing gap as parents of western banks retrenched. They also helped build up competitiveness by strengthening transport systems and put a strong focus on achieving greater energy security and efficiency and increasing the sustainability of energy production.

According to the third progress report on the JIAP the region will continue to face significant challenges, including the negative impact of tensions between Russia and Ukraine. The three IFIs will maintain their support to the region beyond 2014, building on the basis of the close and efficient cooperation that was established during the period of the Action Plan. 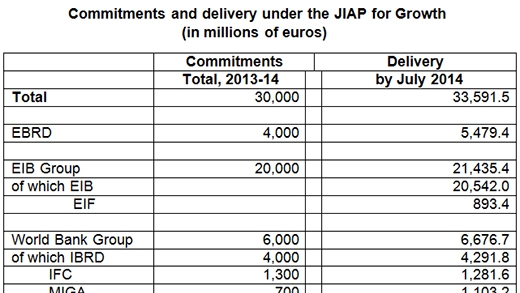