WASHINGTON, August 19, 2013 – The World Bank Group* provided $10.2 billion in funding to governments in Europe and Central Asia (ECA) during fiscal year 2013, aimed at fostering growth for shared prosperity and poverty reduction. The region’s growth is expected to reach 2.8 percent in 2013, 3.8 percent in 2014, and 4.2 percent in 2015, according to the Bank’s recently published Global Economic Prospects.

Over the past year, IBRD/IDA approved 42 project and policy loans totaling $5.3 billion for ECA, comprising of $4.6 billion and $0.7 billion in IBRD and IDA commitments respectively. The IFC provided $4.4 billion and MIGA $0.54 billion in financing. In addition to its financial products and technical assistance, the Bank Group produced important research about critical issues in the region this fiscal year, including a special report on the economic benefits of climate action, Growing Green. 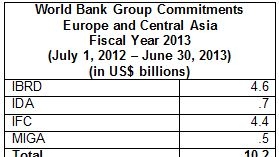 “Growth in Europe and Central Asia continues, despite the slowdown in 2012,” said Laura Tuck, World Bank Acting Vice President for the Europe and Central Asia Region. “This year, calmer financial markets and global trade have helped improve the situation in the region. We have focused on supporting countries in their efforts to strengthen their economic competitiveness and public finances, improve public services, strengthen banking systems, and protect the most vulnerable from the impacts of the economic slowdown.”

The ECA region is implementing a regional strategy that is focused on addressing three critical challenges to growth and development---improving competitiveness, reforming the social sectors to achieve shared prosperity, and making growth more sustainable, including through climate action.

Increasing competitiveness requires improving governance and the investment climate, providing stable and effective financial intermediation, upgrading the skills of the labor force, building and maintaining energy and transport infrastructure, and increasing the efficiency of public spending. To achieve these ends, the Bank has helped modernize tax administration in Armenia and Romania; improve roads in Armenia and Serbia; strengthen the business environment and policies conducive to innovation in Croatia, Georgia, and the Russian Federation; increase access to finance for small and medium enterprises in Turkey; and stabilize public finances and strengthen financial sector regulations in the former Yugoslav Republic of Macedonia.

Findings of the regional report Eurasian Cities: New Realities along the Silk Road show that the cities of Eurasia need to reorganize in order to be competitive in a market economy. Policy makers can support this transformation through better urban planning, faster transport and communication connections, integrated public services, and more efficient financing – areas where some cities in the region have already started to take actions.

The Bank is working with countries in the region to ensure equal access of various population groups, including the poor, vulnerable or otherwise disadvantaged, to economic opportunities and quality public services. This is done by increasing access to better health and education services, supporting community-driven development, improving workers’ skills and creating new job opportunities, enhancing the efficiency and targeting of the countries’ social safety nets, and improving governance so that citizens’ voices are heard in designing social policies and improving public services. The Bank continues to support Roma inclusion efforts through advocacy and evidence-based analysis in such initiatives as the Decade of Roma Inclusion and Roma Education Fund. In the Kyrgyz Republic, Moldova, and Azerbaijan, Bank-supported projects are helping engage rural communities in participatory and transparent decision-making and project implementation at the local level.

The Bank’s ECA region published four new studies on climate change in fiscal 2013. Growing Green: The Economic Benefits of Climate Action provides practical policy options for achieving a greener growth path by prioritizing investments in energy efficiency, expanding the use of cleaner energy, and improving natural resources management. Energy Efficiency: Lessons Learned from Success Stories analyzes the policies of countries in the European Union that have improved energy efficiency the most. Balancing Act: Cutting Energy Subsidies While Protecting Affordability demonstrates how to ensure that climate action supports social inclusion by addressing the household impacts of higher energy prices. Looking Beyond the Horizon: How Climate Change Impacts and Adaptation Responses Will Reshape Agriculture in Eastern Europe and Central Asia shows that priority measures for adapting to climate change can increase agricultural productivity and contribute to development goals.

The International Finance Corporation (IFC) this year supported private sector development in ECA with $4.4 billion of commitments in 130 projects, including $1.2 billion in syndicated loans and other mobilization. IFC also delivered advisory services worth $36.4 million with a focus on projects in IDA countries, fragile and conflict-affected states, and climate change.

Highlights of IFC’s program addressing these regional priorities are:

During fiscal year 2013, the Multilateral Investment Guarantee Agency (MIGA) provided support for six projects with $537 million in political risk insurance coverage in Europe and Central Asia. Through these guarantees, the Agency continued to bolster the region’s financial sector, especially as the euro-zone crisis endured. MIGA also issued guarantees for a maritime transport project in Izmir, Turkey.