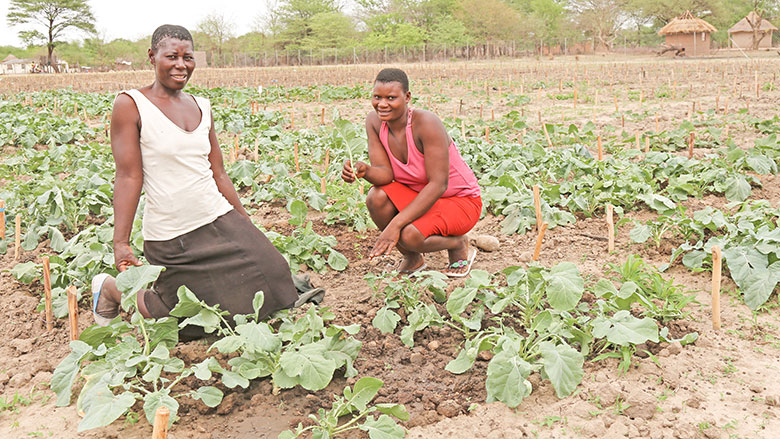 HARARE, March 19, 2020 – A thriving community garden has become a hive of activity in Chireya, a community that has stopped stream bank cultivation to stem land degradation and preserve its environment.

For years, the agricultural community had relied on stream bank cultivation—the practice of growing or cultivating crops near a wetland, stream or river— to grow their crops and feed their families which was alarming as gullies had developed around the community.

Owing to the high cost of land restoration, the community was involved in prioritizing the two gullies that were threatening a maternity ward at Chireya Mission Hospital, and the local business center.  Gullies are typically associated with sodic soils which are highly prone to water and chemical erosion; about 15% of Zimbabwe’s territory is thought to be underlain by sodic soils.

Restorative work was undertaken to fill the gullies with stones and stabilize them by planting grass and trees through the $5.65 million Hwange-Sanyathi Biological Corridor Project. One of the project’s four components of sustainable land management supported the voluntary relocation of families to participate in community gardens established under the project, complete with year-round solar-water pumping, fencing, extension advise and agricultural starter packs for inputs. Largely occupied by women, each family has a 250-square-meter portion which stands to improve year-round household supply of nutritious vegetables and smoothen incomes. The number of beneficiaries currently stands at 300 households, with many more households poised to benefit through enhanced supply of safe drinking water and market availability of affordable fresh vegetables.

“We no longer engage in stream bank cultivation which was seasonal anyway, whereas the garden keeps us busy year-round,” said Sarudzai Mapfurambanje, a 27-year old community resident and mother of two. “We can feed our families and access drinking water from the garden.”

In addition, a brick molding activity was designed to reduce clay extraction to make bricks, itself previously a major driver of land degradation. Targeting young people, the project supported the molding of sun-dried cement bricks using river sand. Compared to soil which was more environmentally destructive, river sand was more plentiful as a result of heightened river erosion, while sun-drying helped save precious trees and forests.

The sand is sourced from the nearby Ume river which is highly silted following years of streambank cultivation. The location for extraction is guided by the national Environmental Management Agency. Additionally, the project has codified the land restoration key lessons into a toolkit for the management of sodic soils across the country.

As the community faces a continued threat of erosion inherent in sodic soils, community vigilance and readiness are critical to combat new ravines. Thus, environmental management committees exist in Chireya to provide for continued community mobilization for gulley maintenance and overall environmental stewardship. Chief Chireya highly welcomed the project and vowed to continue with community engagement toward participatory land-use planning and management.

“By ditching stream bank cultivation and working together in the community gardens and brick molding among other interventions, we have a renewed sense of community and will do whatever it takes to preserve our environment,” said Chief Chireya of Gokwe North. “As the leadership, I am committed to continuous education and awareness raising on the danger of stream bank cultivation so that even in rainy seasons, communities remain compliant.”

In the Sidinda Ward of Hwange Rural District Council, the project sought to carve out a community conservancy and restock the landscape with long-depleted game species, thereby improving the participation of local communities in the wildlife tourism economy. Working with the Zimbabwe Parks and Wildlife Management authority, Hwange Rural District Council, and local community leadership, the project fenced off and stocked a riverine piece of land with translocated buffalo, kudu, and impala species, providing for a robust foundation stock that could be grown to a sustainable population for photographic and hunting tourism in the future. The community shared in the proceeds of the conservancy, in partnership with Hwange RDC and a private operator managing the conservancy.  Although the benefits have not accrued to the community yet, there has been a remarkable absence of poaching of the translocated species notwithstanding that some of the species roam freely in and out of the fenced area.

However, as the country has been experiencing a serious drought that has affected the entire southern African region, the buffalo population has declined significantly following a sharp decline in forage resources. To stem buffalo deaths, community members volunteered to harvest grass further outside the conservancy for processing into hay, again evincing community ownership of the project. Formalization of the Sidinda Conservancy is ongoing, notably following the articulation of the business plan that delineates the different roles and relationships between the key actors in the project, including the community, private operator and Hwange Rural District Council.

“Years back we had lots of different animals and when we realized that they were getting fewer we took on the suggestion to restock and we are now looking forward to a change in livelihoods not only in Sidinda Ward but the whole Hwange District,” said Sinikiwe Nyathi, Sidinda Ward Councilor who is also the chairperson of the Hwange District.