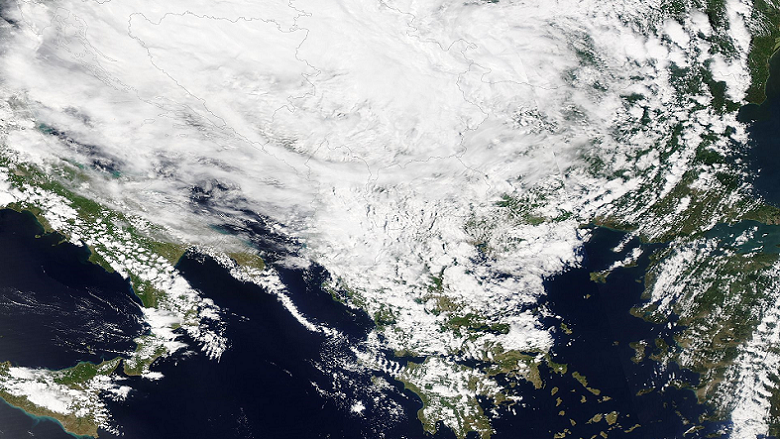 The Yvette storm system as seen in May 2014, which brought historic rainfall and flooding to the Balkans. Understanding the impact of changing climate extremes is a critical step towards effective disaster risk management policies.

Extreme weather is fast becoming the 'new normal' in the Balkans. In May 2014, historic flooding pushed over 125,000 people into poverty in Serbia alone, and caused damages and losses well over $2 billion in Bosnia and Herzegovina. A stifling round of record temperatures smothered Southern Europe last year, buckling train tracks in Serbia and earning the nickname ‘Lucifer’ for scorching temperatures above 40 degrees Celsius, with similar temperatures affecting the region just a few months ago. According to international researchers, climate change played a significant role in both these heatwaves – and trends may worsen in coming decades. 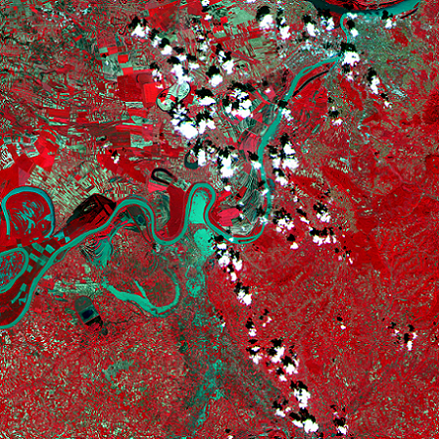 Unprecedented flooding hit part of the Balkans in 2014. In this photo: floods in the the town of Obrenovac, Serbia. Photo: Vekom Geo.
A recent World Bank report found that summer temperatures in the Balkans could rise 4 degrees Celsius or more above pre-industrial levels by the end of the century. Temperatures this extreme could bring severe droughts, slashing agricultural yields while inducing water scarcity throughout the region. The lack of reliable rainfall could also reduce hydropower production – a major renewable energy staple for the Balkans – by 20 percent or more. Moreover, winter and spring flood risks are also expected to increase, exacerbating regional disasters like the 2014 floods.

Governments are turning to innovative technologies to better understand changing climate and disaster risk, and take effective action. For example, with support from the Global Facility for Disaster Reduction and Recovery (GFDRR), as well as the World Meteorological Organization (WMO) and USAID, countries throughout the Balkans are sharing real-time hydrometeorological data and forecasts to provide critical flood information. Compiling this information into advanced flood models will provide critical early warnings for vulnerable communities, and help officials analyze long-term climate trends.

"Sound disaster risk management policies must begin with a robust understanding of the risks that communities within the Balkans are facing."
Linda Van Gelder
World Bank Regional Director for the Western Balkans.

In Serbia, the government is partnering with the World Bank and the European Union to perform extensive LiDAR analysis of priority regions to build detailed Digital Terrain Models. These models can accurately map flood zones, and are informing strategic investments in roadways, risk-reduction efforts, and community preparedness to lessen the impact of future events.

"When it comes to flooding, investments in resilience are only effective when the risks are clearly understood," says Darko Milutin, a Disaster Risk Management Specialist with the World Bank. "Using LiDAR, we are able to provide the government with extremely refined topographical maps that can be used to build more accurate flood models, to better asses flooding hazards and risks, and thereby letting governments know where and how to act, plan and invest to reduce those risks."

Reliable risk information is the foundation for effective disaster risk management policies. To scale up available data in the Balkans, the World Bank and GFDRR have developed the Open Data for Resilience Index, an open-source platform for collaborative climate and disaster risk information. Datasets submitted to this portal can be visualized by other custom tools, such as ThinkHazard! (a risk visualization platform), Geonode (a geospatial data management system) and Inasafe (rapid hazard impact scenario software). Thessaloniki recently leveraged tools like these to create a municipal-level open data portal that is now powering risk modeling efforts to better understand the cities’ vulnerability to floods and earthquakes, while open data efforts on pre-1990 housing stock in countries like Bulgaria are helping leverage government action on seismic risk throughout the region.

Some of the technologies being used to bolster resilience in the Balkans are focused on financial risks, rather than physical ones. The 2014 floods, for example, caused damages and losses equivalent to nearly 5 percent of Serbia’s GDP and nearly 15 percent of Bosnia and Herzegovina’s GDP, with recovery needs straining government resources. To build financial protection against future events, the Government of Serbia has secured an innovative catastrophe loan from the World Bank, which can be accessed within 24 hours of a disaster to ensure rapid recovery while safeguarding social investments. The instrument, called a Catastrophe-Deferred Drawdown Option (or Cat-DDO), is the first of its kind to be implemented in the region, and serves as a model for other countries looking to build financial resilience against an increasingly unpredictable climate.

Innovations like powerful machine learning algorithms, affordable high-resolution drones, and digital financial tools are fast becoming mainstream. However, additional effort is needed to ensure that these technologies are effectively leveraged for climate and disaster resilience. The Understanding Risk Balkans Conference – hosted by the Government of Serbia and supported by the World Bank, the European Union, and GFDRR – is being held in September 2018 to help scale up the application of these emerging technologies.

“Countries within the Balkans are taking proactive steps to reduce their climate and disaster risk,” says Linda Van Gelder, World Bank Regional Director for the Western Balkans. “Sound disaster risk management policies must begin with a robust understanding of the risks that communities within the Balkans are facing. Understanding Risk is one of the few platforms where scientists, government representatives, private sector voices and civil society can take on this challenge together, and apply the latest innovations in the field.” 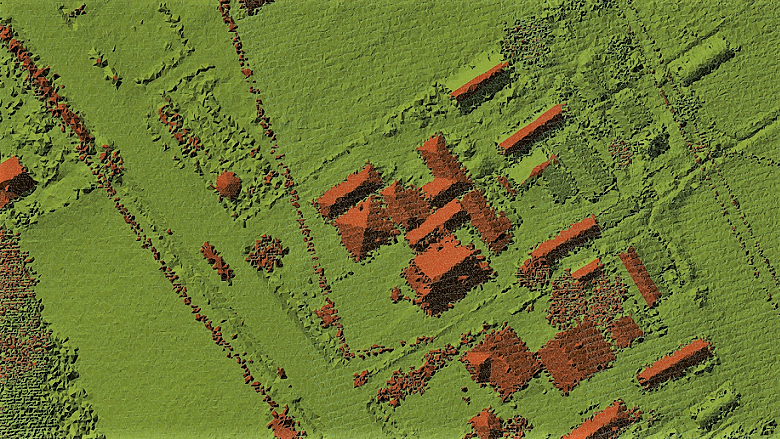 The Government of Serbia, with funding from the European Union, is using LiDAR technology to create Digital Terrain Models to help predict future impacts from flooding. Imagery like this can provide critical information on topography, the location of buildings, infrastructure, and more. Photo: Vekom Geo.

As climate patterns become more unpredictable in the region, harnessing new technologies will be vital to ensuring the safety and sustainability of communities within the Balkans – whatever weather comes their way.