Skip to Main Navigation
This page in:_
publication January 31, 2018 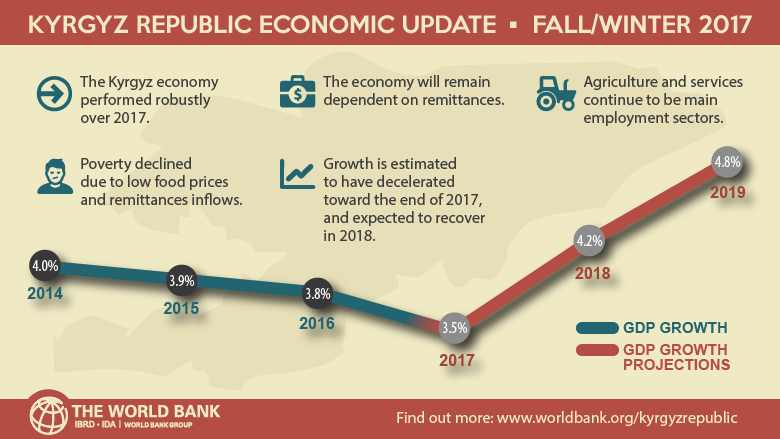 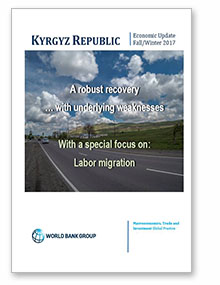 The fall/winter 2017 edition of the biannual Kyrgyz Republic Economic Update outlines the economic situation in the country as well as the medium-term development prospects.

Following the Presidential elections held in the Kyrgyz Republic on October 15, 2017, the new President Mr. Sooronbai Jeenbekov announced that he would extend the country's reform programs and the development strategy of his predecessor.

The Kyrgyz economy appears to have recovered from the external shocks of 2014-15.

Over the first 9 months of 2017, real GDP expanded by 5%, year-on-year, thanks to improvements in the external environment and a continued expansionary fiscal policy, which were mirrored by strong gold production and a strengthening in domestic demand.

The current account balance also improved markedly, led by significant gold exports and continued growth in remittances, following a dramatic drop in 2015 mainly as a result of the recession in Russia.

Macroeconomic policies have been expansionary, fueling economic activity but coming at the cost of continued fiscal imbalances and increased public debt. The monetary stance remained relaxed.

Growth in credit to the economy accelerated, and private sector activity has responded to policy incentives.

On the fiscal side, capital spending, as well as recurrent spending continued to be high, especially in the lead-up to the Presidential elections and including one-off emergency expenditures. This means that onward adjustments will need to be higher to rebuild fiscal buffers to withstand future shocks and to maintain debt sustainability.

For 2017 as a whole, growth is estimated at 3.5%. With gold production slowing down due to geological factors, economic activity is estimated to have moderated in the second half of the year.

Over the medium-run, output growth is expected to converge toward its potential, slightly above 4.0%.

This assumes continued inflows of remittances supporting domestic consumption, a moderation of the fiscal expansion and a negative contribution from net exports.

The economy is expected to remain dependent on remittances. Private inflows will continue to support household incomes and boost domestic demand, but they also come with challenges.

Indeed, large remittances inflows can undermine the country’s competitiveness through a phenomenon similar to “Dutch Disease”, in which the impulse of foreign exchange inflows into domestic demand can generate a significant real exchange rate appreciation, unless macroeconomic policies play a countercyclical role.

In addition, the high dependence on remittances heavily exposes the country to external shocks.