De-risking in the Financial Sector

Global financial institutions are increasingly terminating or restricting business relationships with remittance companies and smaller local banks in certain regions of the world – a practice that is called “de-risking.”

We know that de-risking is happening. At the request of G20, the World Bank Group conducted two surveys on de-risking in 2015, undertaken in cooperation with the Financial Stability Board, CPMI, and the G20 Partnership for Financial Inclusion. One survey covered remittances companies (money transfer operators – MTOs) and the other examined correspondent banking relationships (CBRs).

Factors driving derisking tend to be a combination of cost/benefit considerations and concerns about AML/CFT risks. That is particularly acute for clients that generate low volumes, but present significant AML/CFT risks.

The Risks of De-Risking

De-risking may threaten progress that has been achieved on financial inclusion. It also has the potential to reverse some of the progress made in reducing remittance prices and fees, if banks close or restrict access for money transfer operators.

Some humanitarian organizations have also reported that they have lost access to financial services as a result of de-risking. The inability to get humanitarian assistance to refugees from political conflicts or natural disasters could result in death from starvation, exposure, and disease.

De-risking can frustrate AML/CFT objectives and may not be an effective way to fight financial crime and terrorism financing. By pushing higher risk transactions out of the regulated system into more opaque, informal channels, they become harder to monitor.

the World Bank conducted country pilot studies to analyze the effects of de-risking on consumers and on the wider economy in order to complement to the work Financial Stability Board is doing at the global level.

The report -- The Decline in Access to Correspondent Banking Services in Emerging Markets: Trends, Impacts and Solutions -- published in June 2018,  found that de-risking ultimately is a business decision, since global banks consider CBRs to be a low-margin but high-risk activity. The findings imply if the cost of CBRs could be lowered through fintech or other tools, or if risk could be reduced through effective anti-money laundering (AML) regime, CBRs would be a more attractive business line for global banks. The report is based on eight countries in Latin America, sub-Saharan Africa, East Asia and South Asia that had expressed concerns over de-risking and its impact on their financial systems and remittances.

We are ready to work with all developing countries on this critical issue. As part of our work on Universal Financial Access, we are currently providing technical and financial support to national authorities to mitigate risks in the financial sector without harming financial inclusion efforts.

For example, with funding provided by the UK, we are assisting with the supervision of money transfer businesses in Somalia to strengthen business processes and enhance transparency and compliance. Remittances in 2015 were estimated to reach a total of US$1.4 billion in Somalia and support 23% of the GDP.

In order to ensure that policies and regulations to mitigate risks do not unnecessarily restrict access to financial services, we offer support to national authorities to pursue a wide range of priorities: 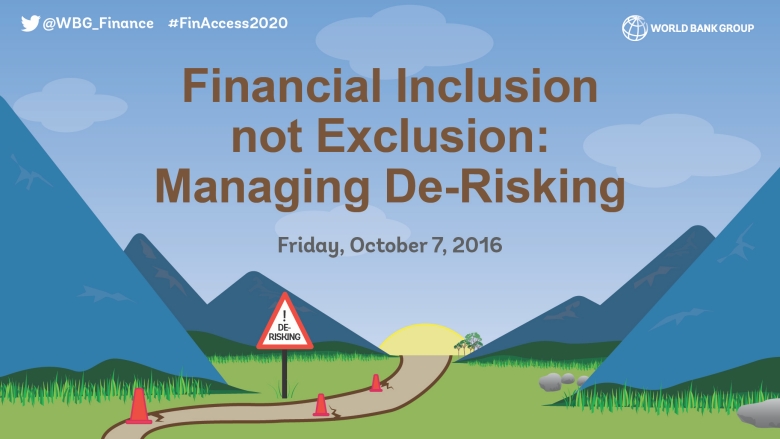