New Delhi, February 2, 2018 – The Government of India and the World Bank today signed a $375 million loan agreement to support India develop its first modern inland water transport fairway on the Ganga river between Varanasi and the seaport of Haldia.  The 1,360 km-stretch of the waterway will bring thousands of jobs in cargo logistics and transportation to one of the most populous regions in the country.

The Project will help the Inland Waterways Authority of India (IWAI) put in place state-of-the-art infrastructure and navigation services needed to develop the waterway -- known as National Waterway 1 -- as an efficient logistics artery for northern India, while adopting the least intrusive methods of making the river navigable.  The Capacity Augmentation of National Waterway 1 (Jal Marg Vikas) Project will help save more than 150,000 tons of CO2 equivalent in greenhouse gas emissions annually by moving cargo away from fossil fuel-consuming road and rail networks. 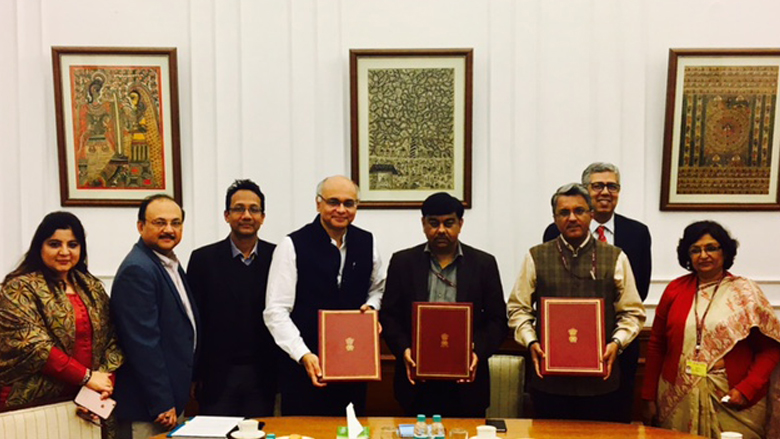 "India has an extensive network of navigable inland waterways which has a substantial economic and trade potential,” says by Sameer Kumar Khare, Joint Secretary, Department of Economic Affairs, Ministry of Finance. “Through this Project, the government is now reviving the Ganga watercourse that will help the region’s industries and manufacturing units, as well as the farmers, by giving them access to markets further afield.”

“Harnessing the mighty rivers of South Asia to build an effective multi-modal transport strategy will give the region a competitive edge on the global scene,” says Junaid Ahmad, World Bank Country Director for India. “This project will allow India to move goods seamlessly between road, rail and water, and bring down logistics’ costs.  Importantly, it will help IWAI put in place environmentally-sustainable strategies for inland navigation that can be replicated on other waterways in India and other countries.”

Today, goods in India travel by congested road and rail networks, which slows cargo movement, adds to uncertainties, and generally increases the costs of trade logistics. Although carrying bulk goods on waterways is cheaper, more reliable and less polluting than transporting them by road or rail, India has yet to develop this cheaper and greener mode of transportation.

NW1 passes through one of India’s most densely populated areas, and a sizeable 40 percent of the country’s traded goods either originate from this resource-rich region or are destined for its teeming markets.  While the region generates about 370 million tons of freight annually, only about 5 million tons currently travels by water.

Once operational, NW1 will form part of the larger multi-modal transport network being planned along the Ganga.  It will link with the Eastern Dedicated Rail Freight Corridor, as well as with the area’s existing network of highways, allowing the region’s manufacturers and agricultural producers to use different modes of transport to reach markets in India and abroad.

The Project will help build the infrastructure needed to develop water transportation in the area.  It will finance the construction of six multi-modal terminals, 10 RORO jetties, ship-repair facilities as well as passenger jetties along the river.  It will also help modernize the ageing Farakka lock and add a new lock to allow for smoother passage of boats. The Project will also help IWAI acquire a state-of-the-art River Information System as well as navigation aids to make travel on the river safer and more reliable.

“The Government of India has an ambitious plan to develop more than a100 waterways that criss-cross the country,” says Arnab Bandyopadhyay, Lead Transport specialist and the World Bank task team leader for the Project.  “This Project will also help IWAI strengthen its institutional capacities to steer the development of the sector in an efficient and environmentally sustainable manner.”

All project interventions have been planned keeping in mind the need to ensure the environmental sustainability of the river.  There will be no abstraction or storage of water under the Project, nor will the navigation services planned affect the flow of the river. Cognizant of the impacts of dredging to establish a deep channel, IWAI has decided to accept the currently available natural depths of the river – ranging from 3 meters in the lower stretches to 2 meters further upstream – for its proposed navigation channel, thus minimizing the need for dredging.

The Project will also support the design and development of a new fleet of low-draft barges capable of carrying up to 2000 tons of cargo in these shallower depths.  Where needed, temporary structures (bandals) made of natural materials such as bamboo will be erected to provide additional sailing depth.  In addition, the Project has introduced an innovative ‘assured depth’ contract framework to incentivize minimal dredging by agencies responsible for keeping the fairway open for navigation. These strategies have helped reduce the need for dredging in the navigation channel to only about 1.5 percent of the river’s annual silt load.  Even this limited dredging will only be done using modern, less intrusive technologies such as the water injection method which has the additional advantage of ensuring that sediments remain within the river’s ecosystem.

The US$375 million loan from the International Bank for Reconstruction and Development (IBRD), has a 7-year grace period, and a maturity of 17 years.