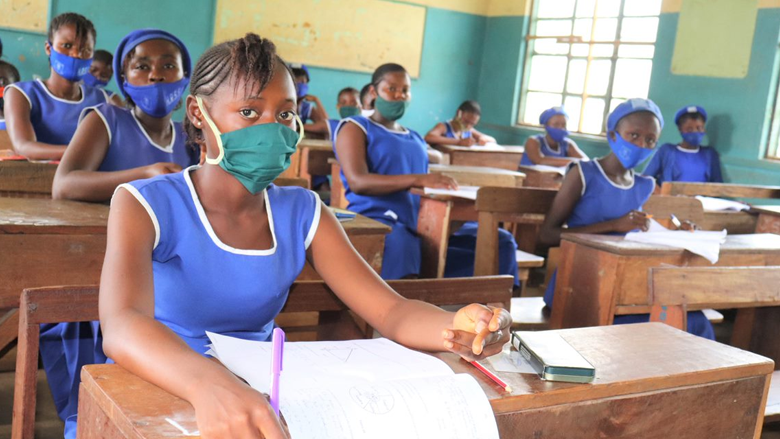 Students at the Queen of the Rosery School in Bo City.

The youth of Sierra Leone were already poorly served by an education system starved of resources. Then the global COVID-19 pandemic struck in March 2020, and schools shut their doors.

The pandemic brought grim reminders of the Ebola crisis of 2014, which led to eight months of school closures in Sierra Leone. The impacts were soon evident. Research by the World Bank estimated that girls aged 12–17 were 16 percent less likely to return to school after the Ebola crisis subsided. Child labor by girls increased by 19 percentage points.

But the experience of Ebola has also informed a better response to this pandemic—one that is effectively reducing learning losses. The IDA-supported Free Education (FREE) Project supports these efforts through several targeted interventions.

A top priority was to keep students safely up-to-speed on their studies through distance learning. The Radio Teaching Program—which went to air a week after schools were closed—has been hugely successful in this respect. The program reached approximately 1.4 million children (including 700,000 girls) during the period of school closures from the end of March until early October 2020.

“I like to listen to the radio program, as it is interactive and fun! Additionally, I received printing material as additional learning support,” says Fatmata, a junior secondary school student.

In tandem, the project assisted the Ministry of Basic and Senior Secondary Education in the design and implementation of measures to keep children and teachers safe when schools re-opened. These built on the school safety protocols and psychosocial support guidelines developed during the Ebola crisis, and have been distributed to all 11,000 primary and secondary schools. About 22,000 teachers were also trained on health and safety protocols before schools reopened. All primary and secondary schools have been equipped with hygiene and safety products, such as face masks, soap, and infrared thermometers, benefitting about 2 million students.

The project is co-financed by the United Kingdom’s Foreign, Commonwealth and Development Office, Irish Aid, and the European Union, whose contributions fed into to a World Bank-administered Sierra Leone Education Multi-Donor Trust Fund. The World Bank has also become a grant agent for the Global Partnership for Education. Under this partnership, Save the Children is leading a consortium of non-governmental organizations focused on community engagement, and reaching the most marginalized and deprived groups. Partners of the consortium include Handicap International, Plan International, Concern Worldwide, the Foundation for Rural and Urban Transformation, Focus 1000, and Street Child of Sierra Leone.

Moving forward, IDA is committed to working hand-in-hand with partners on fostering a more resilient, inclusive, and personalized education system for the children of Sierre Leone.