For Costa Rica, the Future of Forests Hangs in the Gender Balance 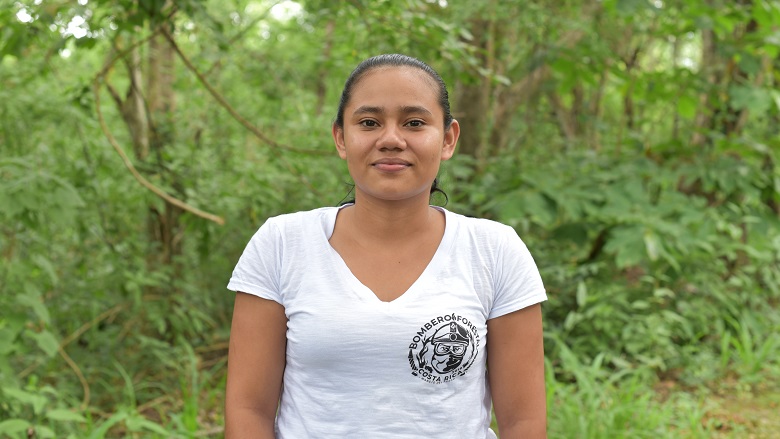 It is the dry season in the mountainous northwestern corner of Costa Rica’s Nicoya Peninsula. Ana Luz Diaz is on high alert. Uncontrolled forest fires are all too common in the Cerros de Jesus Biological Corridor near her home, but she is ready.

Diaz is a forest fire fighter and one of five women on a 30-member fire brigade. When the women joined the force, they were initially met with skepticism.

“There is always that myth or macho thought that a woman cannot grab a machete, a back pump, a leaf blower, that she can't go up a big hill,” says Diaz.

Like fighting fires, overcoming gender stereotypes is hard work. Diaz and her fellow brigadista are proving their mettle and gaining recognition for their contributions, particularly their effectiveness in “finishing off” forest fires.

Diaz says change is happening, but more must be done. Her colleague Melissa Aviles agrees: “I want to be someone, to be seen, not be invisible. I want both men and women to see each other and the support that we too can give.”

Women own less land and fewer and smaller farms than men, receive less financial support for them, and participate less in Costa Rica’s payment for environmental services (PES) program.

A concerted effort is underway to better recognize, promote, and value the different ways women and men contribute to work related to the environment, forests, and climate change. The push is backed by national environmental policies that are helping to restore forest cover, as well as a specific and robust regulatory framework to promote gender equality.

“Costa Rica is at the forefront of sustainability when it comes to human rights, social issues, and the environment,” says Stavros Papageorgiou, World Bank Senior Natural Resources Management Specialist. “The country has shown it has the institutions, legislation, and political will to build on programs and practices already in place and truly integrate gender into land use sector planning.”

In 2019, Costa Rica became one of the few countries in the world to prepare a Gender Action Plan (GAP) for its national strategy on reducing emissions from deforestation and forest degradation (also known as REDD+) through enhanced forest management.

The GAP was developed with funding from the Forest Carbon Partnership Facility (FCPF) and in partnership with gender experts, civil society organizations, groups of indigenous women, and rural smallholder forest producers. It provides a clear path for guaranteeing financial resources, technical assistance, and monitoring to empower and support women so they can implement high-impact activities in the country’s priority forest areas.

The GAP is helping to shape Costa Rica’s Emission Reductions Payment Agreement (ERPA) with the FCPF. Once finalized and signed, with a likely contract value of $60 million, the agreement will reward communities for their REDD+ efforts. A percentage of the ERPA funds will be earmarked to support women’s initiatives de-linked from the property rights requirements that PES schemes often entail.

Seeing clearly through a gender lens

The GAP analysis found that many areas with a high percentage of women-owned farms overlap with areas marked by poverty. The analysis also found that women-owned farms overlap with priority zones for forest conservation and sustainable management, forest landscape and ecosystem restoration, and the promotion of low-carbon production systems. Yet, up until now, many of these efforts have not targeted women’s participation or have simply left them out. 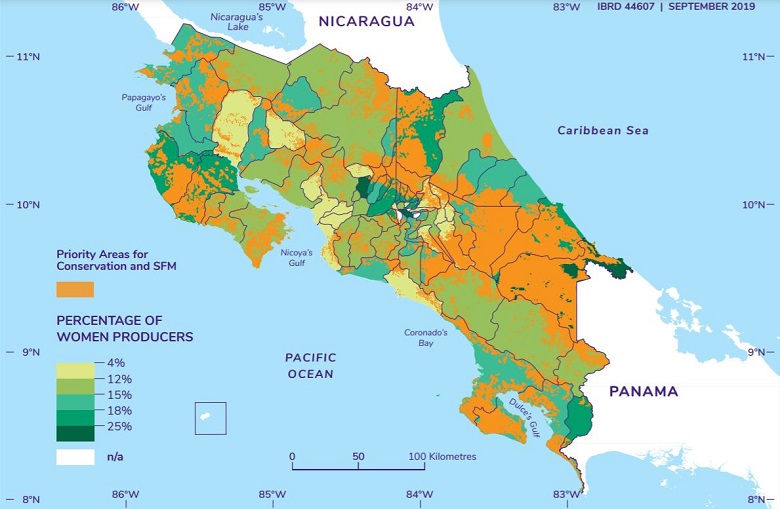 The GAP uses a series of overlaid maps to identify opportunities for involving women as REDD+ agents of change. This map combines information on priority areas for conservation and sustainable forest management with the percentage distribution of women producers by canton (administrative unit).

Regional consultations with rural communities further revealed that women’s preferences, when it comes to activities they would like to carry out, are often in line with efforts that are promoted in the national plan for reducing emissions from deforestation and forest degradation. For example, many women are already engaged in reforestation, ecotourism, cocoa farming, nurseries, improved vegetable gardens, harvesting of non-timber forest products, and traditional indigenous practices such as low-carbon agroforestry systems. By further linking these activities with the National REDD+ Strategy and the emission reduction program’s benefit sharing plan, the incomes and livelihoods of women and their families can be improved along with forest landscapes.

“Looking at the land use sector through a gender lens has brought into focus important realities on the ground as well as significant opportunities for more strategic alignment of economic, social, and environmental goals,” says María Elena Herrera, REDD+ Social Coordinator, FONAFIFO.

As the country builds back from the COVID-19 crisis, the GAP offers a solid foundation for holistic and inclusive action on a resilient recovery. Moving forward, Costa Rica is sharing its knowledge and lessons learned through the GAP with a training module on mainstreaming gender into forest and environmental initiatives.