Emanuela Di Gropello: “Education in Latin America faces a silent crisis that will become very loud. But we can build on it.” 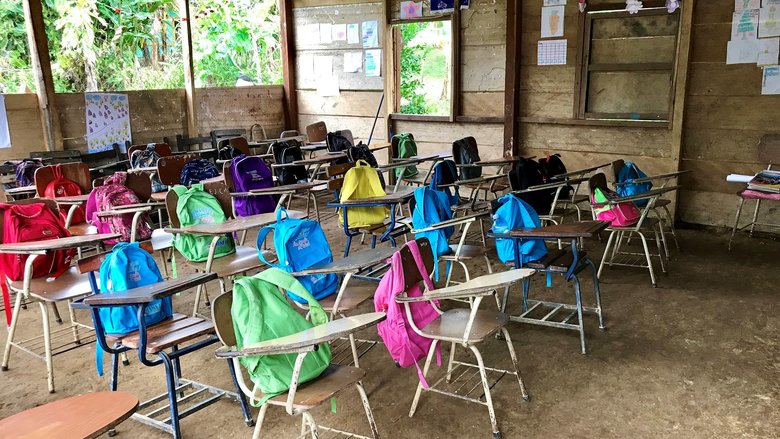 The coronavirus (COVID-19) is having a deeply worrisome impact on education in Latin America and the Caribbean, according to Emanuela Di Gropello, the World Bank’s regional practice manager for education. It’s also a “silent crisis,” she says.

How could the pandemic not have a profound impact on education? Schools are closed across the region. Over 170 million kids are out of school – many of them poor or from disadvantaged areas – and grappling with mostly improvised remote education during a crisis that affects their families in so many ways. Learning losses are likely to be steep, as will learning inequities and dropouts.

Emanuela discovered early in her career that education is at the core of the problems pulling back Latin America, and 20 years after joining the World Bank this perception hasn’t changed much. But there is, she believes, a possible counter story to the challenge we now face in the region.

-How bleak is this scenario, and how would you describe the crisis we face?

First, we must clearly recognize that the situation is very serious for the education sector, and I believe people will increasingly realize that. It’s a bit of a silent crisis; it’s not what we immediately see. The health crisis is obvious, and the economic and social crisis too. But the education crisis is very much in the making and will be more visible moving forward. It relates to the very likely learning losses and increased learning inequities that we are going to notice in the region. The silent crisis will become less and less silent and will eventually become very loud.

Schools are closed in nearly all the countries in the region. This basically means that students must continue studying and learning at home. This is a challenge for all: for households with good connectivity, because remote learning is not easy, and more so for households that do not have good connectivity, live in more remote or disadvantaged areas, or come from more disadvantaged backgrounds. They may not have access to any remote learning or be able to implement it effectively. If we think that 25% of learning is usually lost during the summer (in normal times), we can appreciate the possible implications of school closures. And even when schools have reopened, the recession sparked by pandemic control measures will further exacerbate the damage on education outcomes.

"There are two factors that make it very problematic in our region. Latin America was already facing a learning crisis, with very high levels of learning poverty and stark inequities, and, secondly, the level of connectivity, while higher than in some regions, was still below expectations. "

-How is this different in Latin America from other regions?

The likely learning losses are everywhere in the world; that’s why some countries are starting to reopen schools, often starting with the more disadvantaged students. But there are two factors that make it very problematic in our region. Latin America was already facing a learning crisis, with very high levels of learning poverty and stark inequities, and, secondly, the level of connectivity, while higher than in some regions, was still below expectations. What this means is that about 50% of students are not able to read properly by the age of 10.  And, in a context where, on average, less than 60% of individuals use the internet, even in the most advantaged backgrounds, the risks to learning are particularly high—and all the more so for the most disadvantaged.

-Will dropouts also be a problem?

Yes, we will see a lot more youth dropping out. And for three main reasons: first, because during schools closures the relationship between educators and students becomes looser. This makes it easier to lose kids: not all are logging in as they should, assuming they have access to remote learning; and many of them do not even have this opportunity. A second issue is that if there are significant learning losses, there is a fair risk that people will drop out soon after schools reopen. And the third issue is that this risk will be further exacerbated by the economic crisis, which may drive many households to pull children out of school. All these situations are particularly serious in Latin America because of the preexisting issues and the expected severity of the economic crisis.

-How is the World Bank helping mitigate this impact?

Our response—and the governments’ response—is focused on three main phases. Currently we are coping with the crisis, which is the first phase. That is, helping governments set up effective remote distance learning systems. This is where most of our energy has been put so far, and countries are stepping up to the challenge and being quite proactive and innovative, and very open to sharing and exchanging good practices among themselves. Countries have also turned to education programs with lower-technology options, like television and radio, to increase access to remote learning for households with no connectivity.

A second phase will happen when schools reopen. We can call this phase recovery/managing learning continuity, and the challenges will be many. Designing and implementing protocols to reopen schools safely, as well as mitigating the learning losses with remedial education programs and other academic and pedagogical measures, will be very important. We need to be able to train and redeploy teachers and make sure they can assist the most vulnerable and those who have suffered the most. And we need to have early warning systems, to monitor those who are at most risk of dropping out and target them, so that we don’t lose them. Support to this second phase, through technical assistance and operational support, is already well underway, as countries need to be ready to act swiftly to mitigate the costs on education outcomes.

-You mentioned three phases. What would be the last one, moving ahead?

The third phase will be the improvement of education and what we could call the silver lining of this crisis. We have been framing a response along these three phases, which overlap. The third phase is where we have the potential to build better than before. One major priority will be to sustain and improve some of the innovations developed during the first two phases. This may entail, for instance, expanding education to areas which were underserved in the past through remote learning and scale-up of computer-assisted learning to teach at the right level. Also, and as we fear that in the medium-to-long term the economic crisis will be pervasive, with a lot of public funding possibly redirected to urgent economic and social matters, we will need to build better in terms of structural reforms. This translates into simplifying curriculums and managing and deploying teachers more effectively, for example. These reforms have been delayed and we can now implement them.

Furthermore, we have discovered during this crisis how difficult it is to be a teacher and that parents have a critical role in supporting their children’s education. This must be appreciated and rewarded. And finally, there is now a nice dynamic among Latin American countries in sharing their experiences in the education sector. I hope this collaboration continues going forward so that we can do things better in the future. Latin American countries should seize these opportunities, which complement each other, to build education systems better than before.