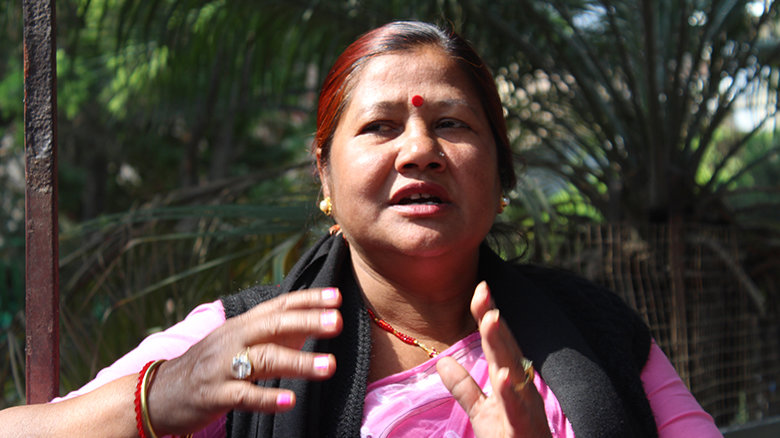 Forty-eight year old Manju Malasi is one of four females elected as mayor in Nepal’s 2017 elections. Born into an educated, entrepreneurial family in the Far-Western district of Doti, she never thought she would enter politics. Manju completed her School Leaving Certificate and married an active member of the Communist Party of Nepal-Unified Marxist-Leninist (CPN-UML), chosen by her family.

Manju recounts an incident which led her to join the CPN-UML. She had the opportunity to meet a renowned political leader Madan Bhandari when he was passing through her district of Doti. When Bhandari asked her name, Manju introduced herself as “the wife of Comrade Krishna Bahadur Malasi”. Bhandari then responded by telling Manju that a woman like her who had good knowledge about Nepalese society should get involved in politics, and also that Manju should introduce herself with her own identity, rather than as somebody’s wife. Manju says, “I was so impressed. I realized that this was a new line of thought.”

Manju then became an active member of the CPN-UML and was involved in forming CPN-UML organizations in all 50 Village Development Committees (VDCs) in her district. She used to work until midnight most days, and faced several challenges. “It was very difficult in the beginning to step out of the house because there were not many women involved in political party activities at that time, especially in this Far Western Region,” she shares.

Her work was recognized by the party and she was nominated for female ward member in her VDC in the 1997 local elections.

In 2001, Manju became a member of the local community forest users’ group. Once, she even had to take a stand against male members of the group, when the group was nominating the additional members. The male members wanted to nominate the owners of the local restaurant, which Manju said was against the rule at the time. “They could have nominated their wives instead, so that fodder, grass and wood could have been utilized by those members who are entitled to it,” Manju says, “So I took a stand and I made this incident public, which helped to garner support from women who had worked so hard for the community forest.” In 2003, Manju became the first treasurer of the Far-Western Region committee of the Federation of Community Forest Users, Nepal (FECOFUN).

Manju was later nominated for position of ward mayor of Dipayal municipality in the 2017 local elections. She was initially asked to settle for the position of deputy mayor, which was reserved for women. But Manju was focused on being nominated for the post of mayor. Manju believes that the party then recognized her leadership qualities and so agreed to her request.

Aside from working in community forestry, Manju has also been working to bring awareness to violence against women (VAW). She said that in her community, men are the bread winners of the family and women are treated as “second-class citizens” and explained that the patriarchal mindset and the easy availability of alcohol in her community have led to increased violence against women. To help address the VAW as a result of alcohol consumption, Manju introduced an awareness campaign in nine areas of Dipayal with the support of community service center, the Nepal police, and the municipality, to minimize alcohol consumption. Under the campaign, the sale of alcohol is limited to between 5 pm and 8 pm each day and anybody found to be consuming alcohol from early morning will be arrested.

To further address VAW, Manju has allocated NRs. 600,000 (USD=NRP 113) for the Judicial Committee, to enable the Committee to provide shelter for VAW survivors when their cases are being heard, and for their medical treatment.

Through her role as mayor, Manju is establishing further initiatives to help empower women in her municipality. In one initiative, Manju has allocated NRs. 3 million to establish health camps which are equipped to undertake uterus prolapse operations. In December 2017, 40 women accessed these services. Further, the municipality has provided sewing and tailoring training to women from poor, Dalit and marginalized communities. It will also be establishing a small-scale garment factory to provide employment to the women, and to enable them to be self-sufficient in making and selling clothes. Manju says, “Women need to be healthy and economically empowered to be able to lead a fulfilled and happy life.”

"Women need to be healthy and economically empowered to be able to lead a fulfilled and happy life"
Manju Malasi
Mayor, Doti
Api