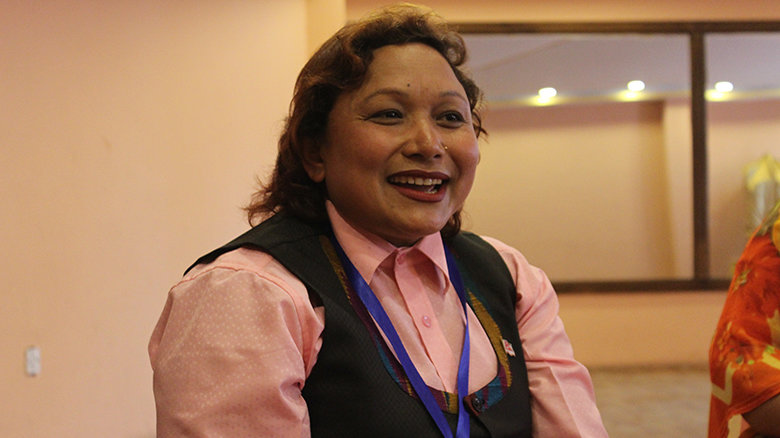 Thirty-six-year-old Yagya Kumari Ruchal experienced gender bias from an early age. Her parents refused to let her continue her studies after grade one, while her brother was allowed to complete his School leaving certificate (SLC). Her passion for education motivated Yagya to take part in non-formal education class. However, she struggled to buy school books and uniforms. As her family were blacksmiths, a skill which she also acquired, she repaired the utensils and agricultural tools of her teachers and used the money she received to pay for her school tuition. She completed her SLC at the age of 18, the first to pass the exam in her community and in her ward.

She became interested in politics during her student days and was affiliated with the Communist Party of Nepal-Unified Marxist Leninist’s (CPN-UML) student wing, All Nepal National Free Students Union. Her involvement in the party politics increased with her affiliation to the youth association, Mukti Samaj.

Yagya struggled to balance political and home life. Being the eldest daughter-in-law in the family, she had significant responsibilities at home, while her political party also had high expectations. Ruchal says, “Earlier, it was so difficult to balance both home and political activities but I did not give up. If you have sheer determination, then anything is possible.”

When reflecting on women working in politics, she considered that in Nepali society women are still not taken seriously when it comes to providing them leadership positions. Ruchal says, “The top political parties might not say it directly to us, but they make excuses such as our family responsibilities, and express doubts over our leadership capacity and ability, even if we have proven ourselves many times.”

Although she succeeded in obtaining the position of vice chairperson of her ward during the 2017 local elections, she says, “Next time, I will fight for the chairperson’s position after gaining experience as vice chair. I was ready to fight on my own if the party would not give me the ticket, but I got selected by getting the highest votes at the ward level selection committee.”

Yagya believes that being a woman in this country is a disadvantage when it comes to enjoying various resources and opportunities. “I learnt early on that if you have your own finances, then you have more power and confidence. So, I used my skills to make iron tools from which I earned money,” Yagya says. Having known the importance of life-skills to become financially secure, Yagya has provided training on making bamboo furniture and Dhaka handloom training to approximately 300 women from Dalit and other marginalized communities. She has also linked these trainings to markets to help give these women sustainable employment. She also began a campaign to encourage all these women to be members of a cooperative, so that the women could play a role in reducing poverty in their communities and increasing awareness regarding domestic violence. “Economic empowerment plays an important role in a woman’s life,” Yagya says. “One objective of forming a strong women’s network is to have a leader who can raise the issues women are facing at decision-making levels.”

Yagya has also encouraged the Judicial Committee to work in close coordination with agencies such as the Nepal Police and the District hospital to help effectively resolve domestic disputes, such as in relation to lending and borrowing, property and divorce. Yagya claims, “There is a proper coordination between the agencies in my municipality, and due to prompt responses to disputes, we have seen immediate results.”

The importance of a girl’s education

Yagya also understands the value of education in a girl’s life, so in addition to being actively involved in politics and social issues, she took the initiative of opening a girl’s school in her district of Dhankuta and served as the school’s principal for 10 years. She states, “I feel that if you have determination and vision, then all the obstacles fade away.”

"One objective of forming a strong women’s network is to have a leader who can raise the issues women are facing at decision-making levels."
Yagya Kumari Ruchal
Vice Chairperson, Dhankuta Chaubise Rural Municipality, Dhankuta
Api