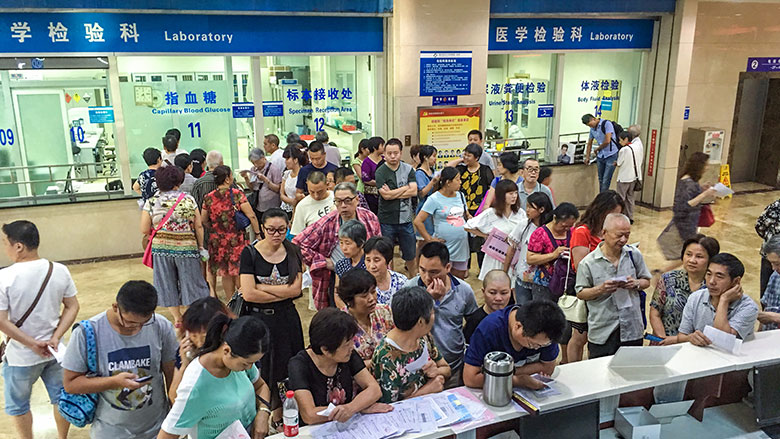 "As the largest operation in the history of China-World Bank cooperation, the Health Reform PforR sets a new milestone. The Program has incorporated the ‘Sanming Model’ and other local successful experience and findings of the health reform study. "
Yu Weiping
Vice Minister of Finance

BEIJING, September 22, 2017 - On this sunny autumn day in Beijing, the Government of China and the World Bank Group officially launched the China Health Reform Program-for-Results (PforR) to improve the quality of healthcare services and the efficiency of the healthcare systems in Anhui and Fujian provinces.

In the last few decades, China has made remarkable progress in increasing life-expectancy, reducing maternal and child mortality, and expanding health insurance for its population. At the same time, it faces new challenges, including aging, rising levels of non-communicable diseases, a hospital-centric health delivery system and rising expectations of an increasingly middle income population. In response, China’s government is determined to deepen its ongoing national health reform, and build a “Healthy China” as defined in the 2015 national strategy.

To support China’s health reforms, the World Bank Group, together with three key Chinese ministries and the World Health Organization, undertook a health sector study entitled “Deepening Health Reform in China: Building High-Quality and Value-Based Service Delivery”. The Health Reform PforR builds on the findings and recommendations of the report as well as on the experiments within China and international best practice.

“China’s health reforms have made major progress, which has laid a solid foundation for the implementation of the Program. Focuses on the key areas and issues, the Program will contribute significantly to the deepening of China’s health reform, by supporting the provinces to address the key and difficult issues, scale up successful pilots, learn from international best practice, and disseminate lessons learned to help find solutions for this global challenge,” said Li Bin, Minister of the National Health and Family Planning Commission (NHFPC) and Vice Chair of the State Council Healthcare Reform Leading Group.

“As the largest operation in the history of China-World Bank cooperation, the Health Reform PforR sets a new milestone. The Program has incorporated the ‘Sanming Model’ and other local successful experience and findings of the health reform study,” said Yu Weiping, Vice Minister of Finance.  The Program is financed by an IBRD loan of US$600 million, the largest loan the World Bank has ever extended to China in the health sector.

Yu noted the Program’s two innovations: first, combination of top-level design, as demonstrated by personal involvement of the top leadership of China and the World Bank, with grassroots practice; and second, the program-for-result mechanism which turns major reform tasks into quantitative targets that are linked with disbursement of the World Bank loan, with independent supervision and evaluation by the third party to ensure implementation.

Vice Governor of Anhui Province Fang Chunming and Vice Governor of Fujian Province Yang Xianjin spoke about the progress of health reforms in their respective provinces, and the preparations made to ensure smooth and efficient implementation of the Program. Anhui and Fujian are among the first provinces identified by the Chinese government as national health reform pilots.

Wang Jianjun Director-General from the National Development and Reform Commission in charge of the use of foreign capital reviewed the history of cooperation between China and the World Bank. “In the last three decades, the World Bank has provided nearly US$2 billion to China in support of 14 projects in the health sector. These projects brought new ideas, improved management and made positive contribution to the development of medical and health services in China.” Wang expressed hope that the PforR will help the Anhui and Fujian provinces speed up health reforms under the 13th Five-Year Plan, and provide examples and experience for the establishment of a basic medical and healthcare system suitable for China.

“Business as usual, without reform, would result in growth of total health expenditure from 5.6 percent of GDP in 2015 to 9.1 percent in 2035, an average increase of 8.4% per year. With the proposed reforms, China could achieve significant savings – equivalent to 3% of GDP,” said Bert Hofman, World Bank Country Director for China.

“I firmly believe that with the health reforms implemented in China and supported by the PforR, China can leapfrog other countries in its pursuit of universal health coverage, improving health outcomes for its population, and moving millions of people from poverty to prosperity, while maintaining cost effectiveness and affordability of the country’s health system,” Hofman said.

The Health Reform PforR will support the health service delivery transformation and the scaling up of reform pilots in Anhui and Fujian provinces, with specific focus on comprehensive public hospital reform; building an effective People-Centered Integrated Care (PCIC) based health system; and addressing the enabling environment, which includes cross-cutting areas applicable to both hospitals and PCIC. The Program will be implemented from 2017 to 2021, directly benefiting 107.7 million people in the two provinces covered.

Learning is an integral part of this PforR. The Program supports the establishment of a three-level knowledge generation and learning framework, aimed to learn from implementation of the reforms at the provincial level, share and mainstream the provinces’ experience at the national level, and share the lessons learned with other countries at the international level.

The launch was chaired by Director of the State Council Health Reform Office and Vice Minister of NHFPC Wang Hesheng, and attended by senior officials and representatives from the related government ministries, Anhui and Fujian provinces, the World Bank Group, the World Health Organization, embassies of the United Kingdom and Australia, and the United Foundation for China’s Health.