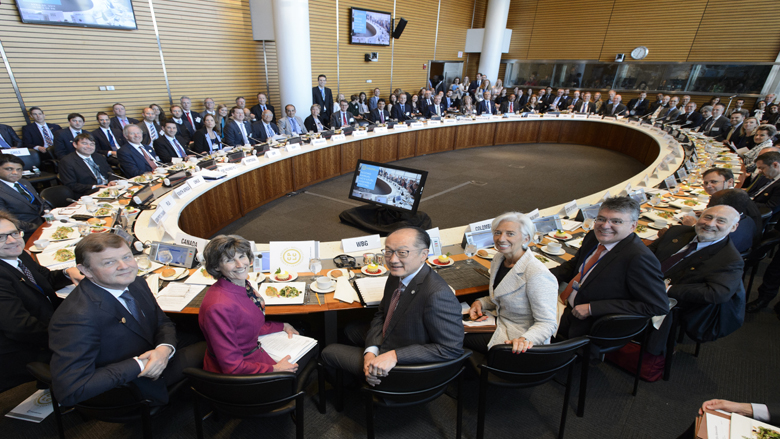 Launched at the Paris climate change talks in 2015, the group is a virtual laboratory for carbon pricing strategies and mechanisms essential for the emissions reductions needed to limit global warming to less than 2 degrees C.

In his remarks, President Kim reinforced the transformational nature of carbon pricing as it facilitates the shift to a low-carbon economy. He also underscored the power of the collective voice represented in the work of the Coalition.

" We need to share your experiences widely to engage and convince many others. We need government, business, and civil society seated as equals around the table. That’s why we launched the CPLC. "

At the meeting, the Coalition also released the Carbon Pricing Leadership Report, which captures over 60 stories of successful carbon pricing efforts from around the world. The stories, which cross geographies and sectors, range from governments working to expand, deepen and link carbon pricing systems, to corporate innovation through internal carbon pricing, and student-led campaigns to raise awareness about the need for action.

Cote d’Ivoire Prime Minister Amadou Gon Coulibaly explained how—as a developing economy—the country is exploring carbon pricing as a way to address poverty while achieving their climate targets. Colombian Finance Minister Mauricio Cárdenas highlighted the launch of a new carbon tax whose revenues will be used to finance the country’s ongoing peace process. This momentum is strengthened by other countries like China which will launch a national Emissions Trading Systems later this year and Singapore, which recently announced a carbon tax that will be implemented from 2019.

The private sector also made leadership commitments.  Global banks—including HSBC, BNP Paribas and Turkey’s Garanti Bank announced their intention to use the CPLC to explore how to address climate risk in their portfolios through internal carbon pricing.  The world’s biggest cement company LafargeHolcim announced a new effort to look at pricing throughout the construction value chain. This builds from the leadership already seen from other corporations like Mahindra Group and Infosys to use internal carbon pricing.  Brazilian corporate leaders, CPFL and Braskem, explained the voluntary simulation of a cap-and-trade system of over 20 major Brazilian companies, underway for the past two years. They were joined by leading investors MN Pension Fund of the Netherlands and the New York State Comptroller’s Office, which is increasingly concerned about the climate risk exposure of the companies they invest in. Carbon pricing is a key tool to measure and manage that risk.

Finally, there was talk of building a carbon-pricing network from the bottom up.  Inspired by successful systems in the European Union, the RGGI initiative in the Northeast US, and the example shown by California, Quebec and Ontario, we are now witnessing a surge in the momentum to converge carbon-pricing systems. Former Australian Prime Minister Kevin Rudd – who now heads the Asia Society Policy Institute - told participants that discussions on a common carbon market have begun in Northeast Asia among China, Japan and Korea. Chile’s Minister of Environment, Marcelo Mena, spoke about the strong interest from Latin American countries in exploring linking and converging carbon pricing systems in the region; Mexico is also working towards establishing a carbon market by 2018, and reinforced the idea of a linked North American carbon market.

The High-Level Assembly, also serves to kick-off the Coalition’s Work Plan for 2017-2018 confirms the governance team and provides a platform for the Coalition to welcome new partners. As if to provide evidence of the wide geographic and sectorial reach of the Coalition, the Assembly welcomed, among many others, the Indian Railways, Portugal, and 10 of the largest Chilean companies.

Madame Lagarde’s opening remarks offer a succinct description of the challenge ahead for the CPLC and provides a mantra to help the Coalition reach the carbon pricing goals to double the percentage of carbon emissions covered by a price on carbon by 2020 and double them again within the next decade: “If I was to leave you with just three little things, it would be: price it right, tax it smart, and do it now”.