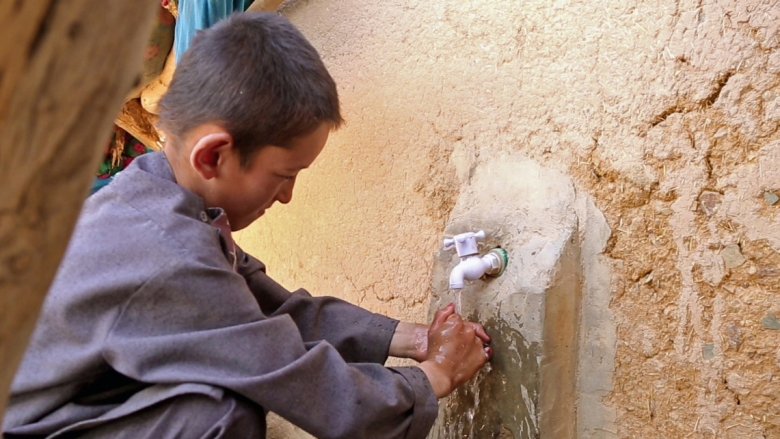 Before the establishment of the water supply system, people used to get water for drinking and washing from streams. Now every household has its own water supply.

SHAHRISTAN DISTRICT, Daykundi Province– The wind blows, rustling the yellow and green leaves on the trees of Paye Wargha Alawdal village. It is noon and most of the villagers are inside their homes, the peaceful silence broken only occasionally by the sound of children playing games under the shadow of the trees. Fatima, 40, a resident of the village, is washing dishes with water from a faucet installed in her yard.

“Life is much easier now,” she says. “Now I do not need to walk long distances to reach a well. I can drink the water and wash my clothes and dishes just by turning the tap on in my home.”

Nearly 240 households live in Paye Wargha Alawdal village in the Shahristan district of Daykundi Province in central Afghanistan, where the lack of access to sufficient and clean drinking water had brought about an increase in disease. “We used to bring our drinking water from streams and we had many cases of tuberculosis in our village,” says Mohammad Daoud, 47, a member of the local Community Development Council (CDC). “Now, people drink the water from the pipe system and the number of people getting disease is very low.”

The problem was resolved when villagers built a water supply system with help from the National Solidarity Programme (NSP). Implemented by the village CDC, the system, completed in November 2015, ensures a reliable water supply to the beneficiary households through a tank connected by pipeline to a newly dug well. More than 55 households in the village use the water supply and have sufficient access to clean water. 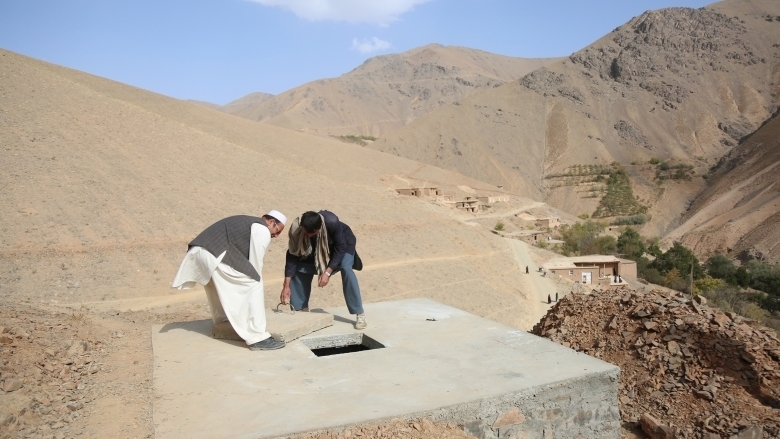 People living in Wargha Alawdal village are satisfied with NSP funding and are happy that they have access to clean water. Photo Credit: Rumi Consultancy\World Bank

With the new water system running, the villagers have seen a dramatic decrease in the incidence of disease. “We used to suffer from infectious diseases, such as tuberculosis, sore throat, and diarrhea, especially in children,” says Khadim Hussain, 70, a CDC member.

The water system has also benefited villagers in other ways. “In the past, I had to walk 500 meters three times a day to fetch water,” says Jan Ali, 14, a 7th grade student, playing a game with his friends. “Before the water supply system, I had less time to study my lessons and play games. I was always busy bringing the water by donkey. Now I have more time.”

" All the projects we implemented through NSP brought big differences to our village. Now, we can reach a clinic faster, we have sufficient water, and we have no fear of floods " 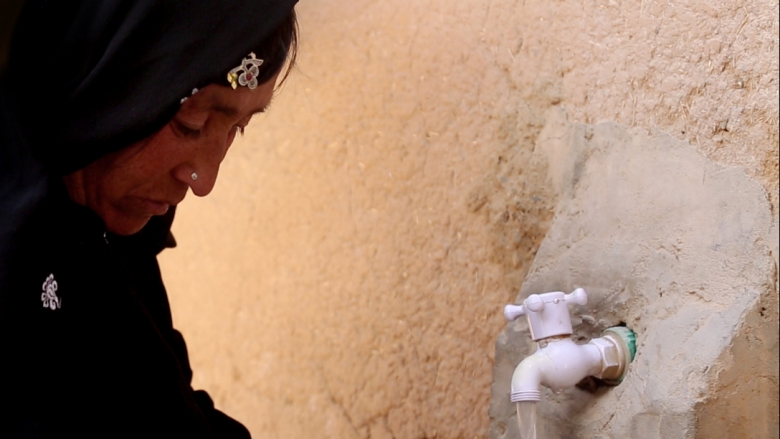 With the help of the National Solidarity Programme (NSP), villagers were able to build a water supply system to solve their problem through their Community Development Council (CDC).

NSP is the Government of Afghanistan’s flagship program for rural development, implemented by the Ministry of Rural Rehabilitation and Development (MRRD). NSP is supported by the International Development Association (IDA), the World Bank Group’s fund for the poorest countries, the Afghanistan Reconstruction Trust Fund (ARTF), the Japan Social Development Fund (JSDF), and bilateral donors.

NSP started its work in Daykundi in 2003, eventually covering all eight districts and establishing 750 CDCs across the province. The program has completed nearly 1,600 projects in the areas of transport, education, and drinking water.

However, the most significant gain has been in women’s empowerment. “Our biggest achievement in Daykundi is the equal participation of women in all the CDCs,” says engineer Ali Jan, NSP provincial officer. “Women actively participate in all of NSP’s decision-making processes and activities.”

Paye Wargha Alawdal village provides a good example, where women comprise half of the CDC, and take leadership roles in decision making, project monitoring and problem solving. “My wife is also an elected member of the CDC,” says Noor Hussain, 65, a CDC member. “Women are helping us a lot to implement the projects better.” 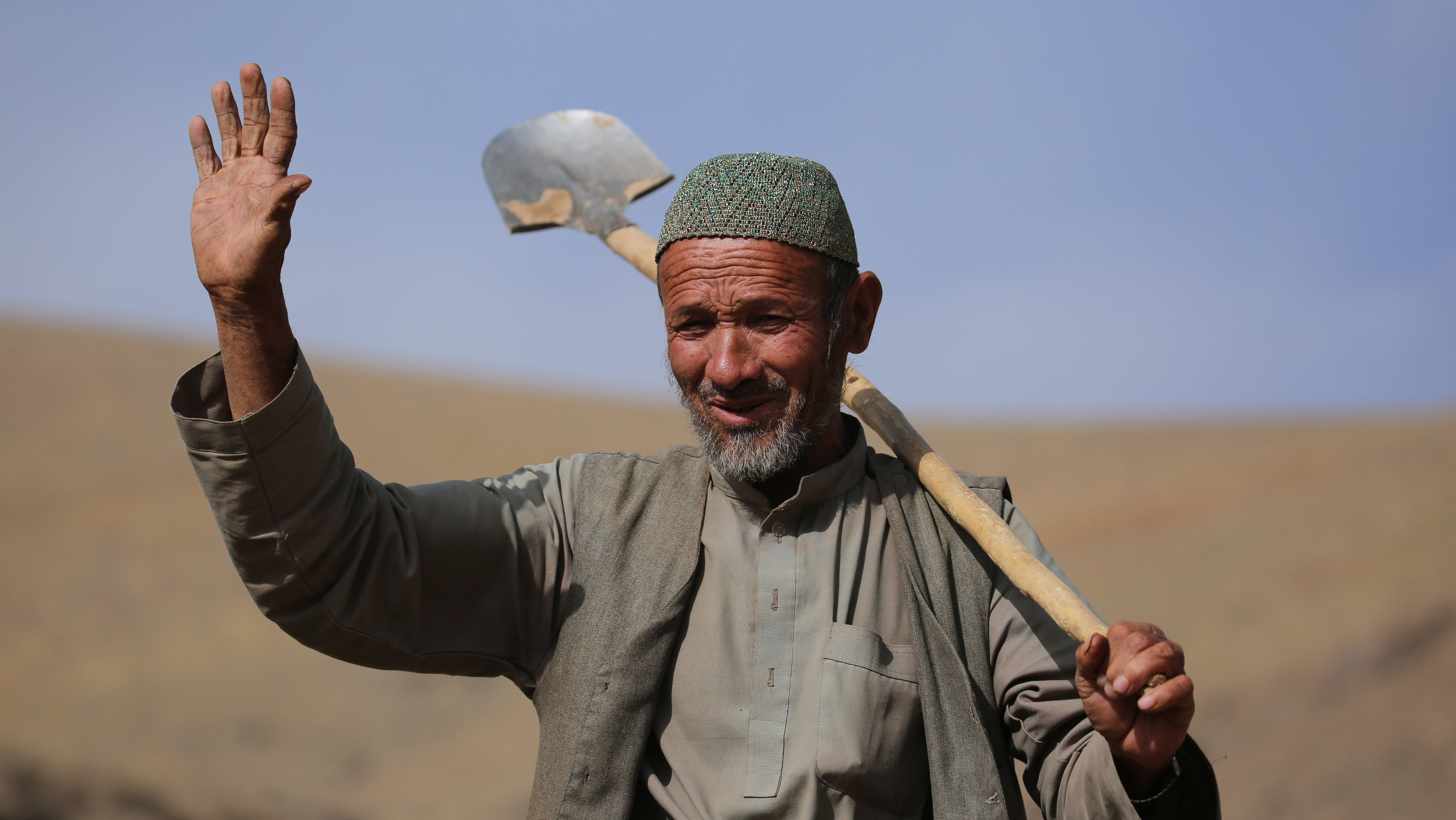 Most of the Wargha Alawdal villagers earn their income through farming. Photo Credit: Rumi Consultancy\World Bank

Paye Wargha Alawdal village has received two rounds of NSP block grants. In the first round in 2004, villagers used the funds to construct a 845-meter protection wall and to provide 82 solar panels to villagers.

In the second round of NSP funding in 2013, totaling 2.3 million afghanis, Paye Wargha villagers established the water supply system and constructed 61 latrines.

Villager buy-in is a key component of NSP, sustaining the program’s impact long after the conclusion of direct project activities. “Even though the road condition was poor in Daykundi and it was a challenge to deliver raw materials for the projects, NSP completed them successfully,” says Ali Jan. “This is because we had the strong support of the villagers.”

“In the past 15 years, it is NSP that has helped us to do development projects in our village,” says Mohammad Ali, 32, a local villager. “All the projects we implemented through NSP brought big differences in our village. Now, we can reach a clinic faster, we have sufficient water, and we have no fear of floods.”

At the initiation of the Government of Afghanistan, NSP, through which more than 35,000 CDCs throughout the country played a major role in implementing rural projects and resolving conflict and problems in their communities, will soon be replaced by the Citizens’ Charter Afghanistan Project (CCAP). The objective of the CCAP, in effect a social contract between the government and CDCs, is to improve the delivery of core infrastructure and social services to participating communities through strengthened development councils. These services are part of a minimum service standards package that the government is committed to delivering to citizens.