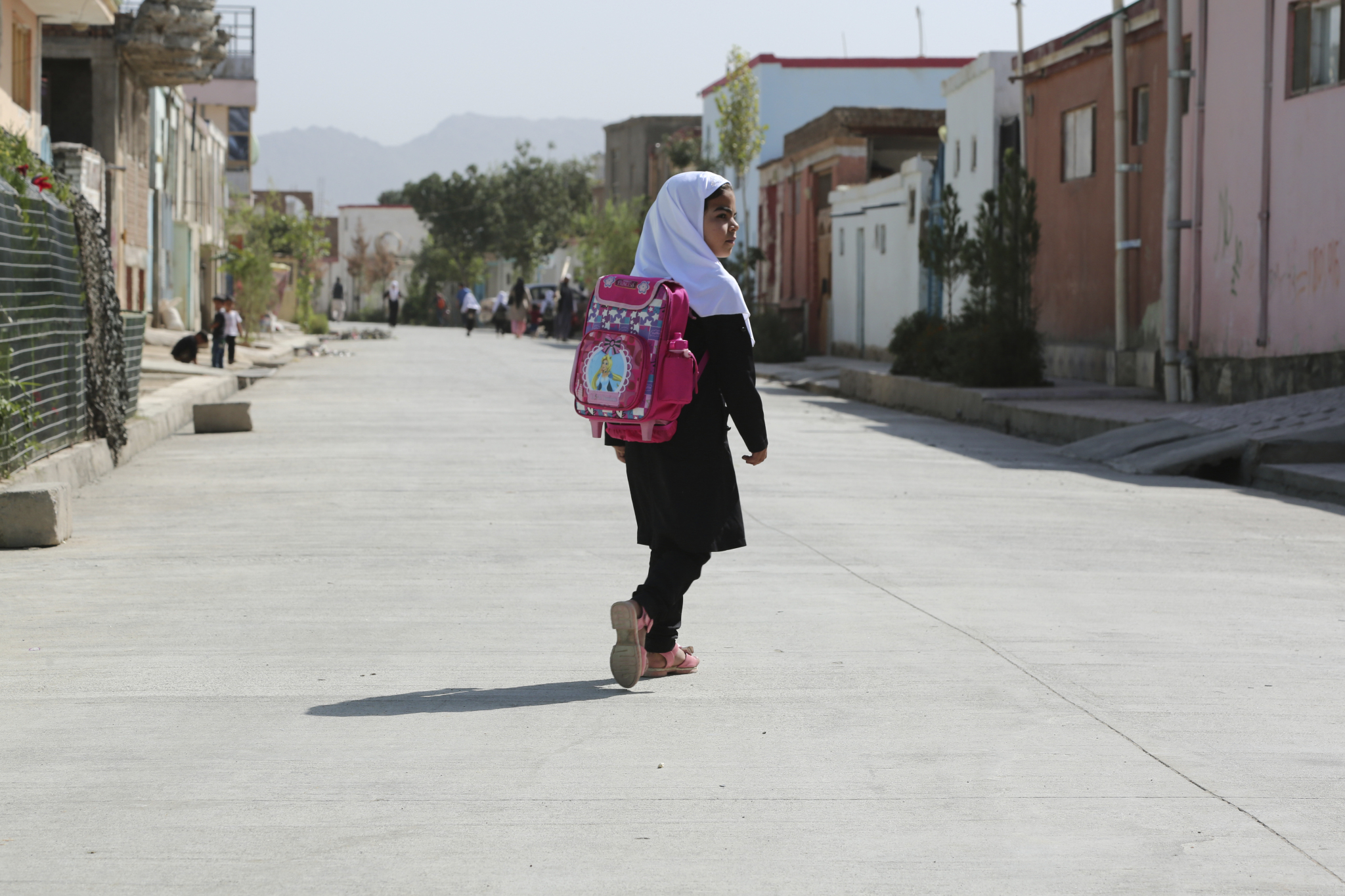 With the improvement of the community road, students can now comfortably walk to school without worrying about dust, mud, and overflowing drains.

KABUL CITY, Kabul – Schoolchildren are walking briskly down the clean paved lane on their way home from school. Amruddin walks among them, holding the hand of his 10-year-old grandson. He is walking from the Khoja Boghra roundabout intersection towards his home in Kabul.

He walks down the smoothly paved lane, talking with his grandchild. “I no longer worry about my grandchild because he will not be stuck in mud and dirty his clothes anymore,” Amruddin says. “In past summers, there was always a bad smell in the lane due to blocked drainage ditches, and in the winter, the lane would turn muddy with snow and rain.”

Both the mud and the bad smell disappeared when the lanes were paved and a proper drainage system was put in place by the Kabul Municipal Development Program (KMDP). “I used to wear a pair of boots every time I came out,” says Amruddin. “But I do not need them anymore.” 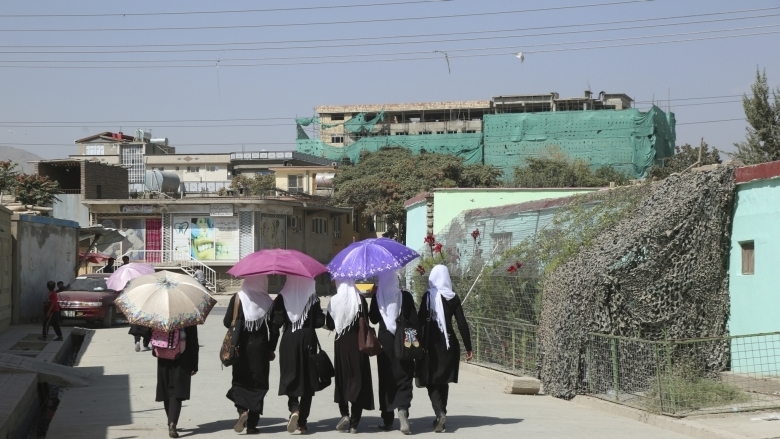 With the paved and clean lanes, residents are enjoying better health and environment. About three-quarters of the beneficiaries of the project are are women and children.

Rumi Consultancy/World Bank
" The lanes are paved and clean and people pay more attention to their health and the environment. " 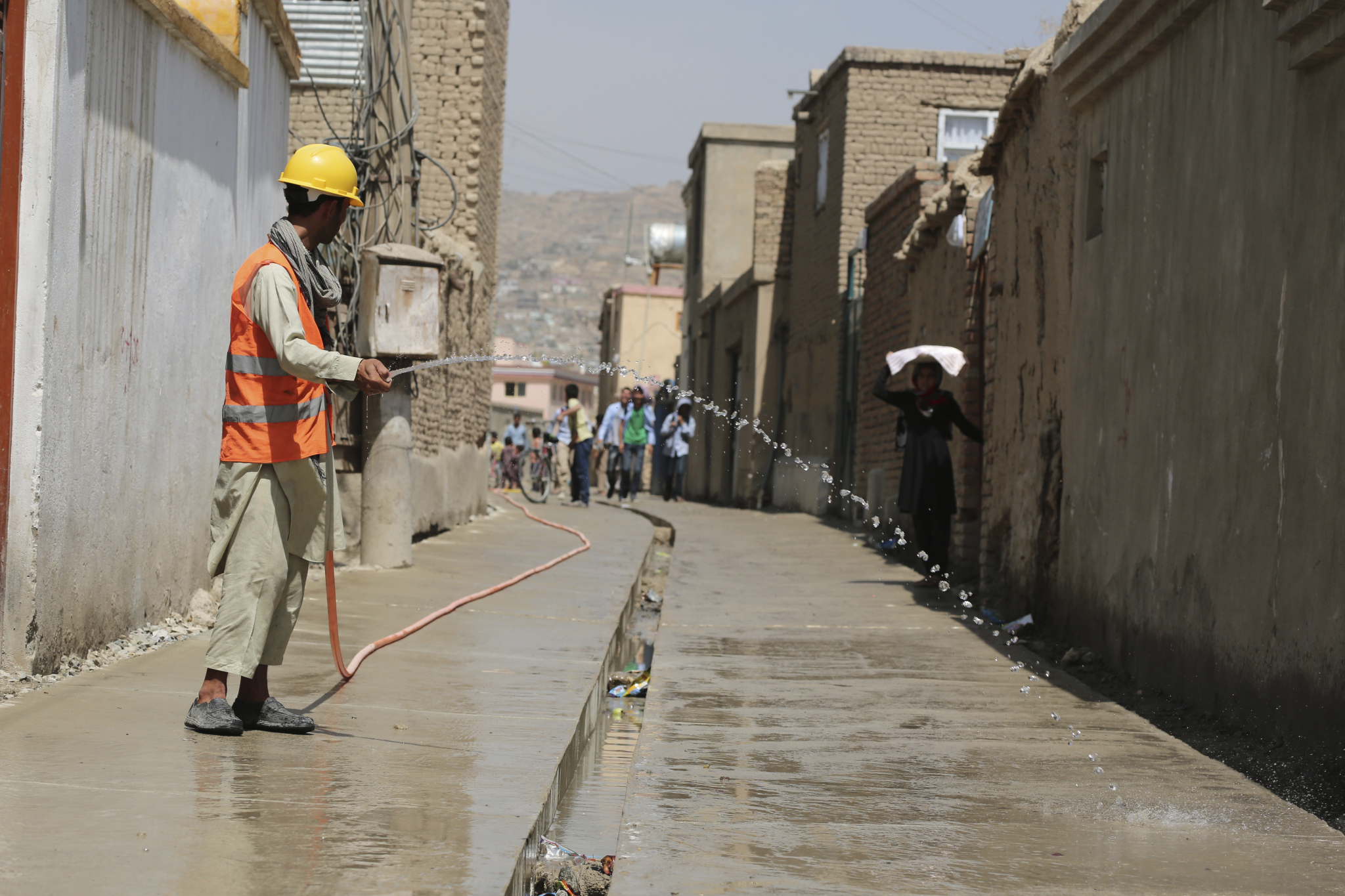 The project has helped build proper drainage systems which has contributed to a cleaner environment. Citizens no longer suffer from bad smells and, muddy paths, and pools of water that attract flies and other insects that may cause disease.

All the lanes in the Khoja Boghra neighborhood have been paved with concrete, benefiting more than 10,000 residents. The concrete lanes and improved road drainage system have contributed to a cleaner environment in Khoja Boghra. In addition, KMDP has provided cleaning equipment to three cleaners recruited by the local community development council. The cleaners are paid monthly by the local residents to maintain the lanes.

Resident Mohammad noted that the clean environment has become a healthier one too. “My children got malaria because of the dirt that was dumped in the lane,” he says. “Now that the lanes are paved and clean, people pay more attention to their health and the environment. Our lanes are no longer a safe haven for flies and other insects.”

Women and children are main beneficiaries

KMDP began work in Khoja Boghra on July 2, 2015 and finished on August 2, 2016, paving a total of 13 kilometers of drainage structures and 64 lanes, totaling 11 kilometers. KMDP is implemented by the Kabul Municipality to, among other initiatives, improve street conditions in neighborhoods, such as Khoja Boghra.

KMDP is expected to benefit over 770,000 people through services provided in some 1,770 hectares of government-owned land in Kabul city. So far, there have been more than 310,000 direct beneficiaries (over 100,000 from upgraded roads and more than 210,000 from trunk roads) and over 76,000 indirect beneficiaries, including students and staff of several schools and institutions of higher education. About three-quarters of the beneficiaries are women and children. In addition, more than 1,348,565 man-days of temporary employment have been generated.

To date, some 618 hectares have been upgraded, reaching almost 34 percent of the targeted area. Within 18 months of implementation, KMDP has built about 17 kilometers (km) of trunk roads for $3.9 million and upgraded some 618 hectares of settlements for $15.6 million. The upgraded areas have benefited from the construction of some 200 km of neighborhood roads, and about 272 km of community drains. Work has been executed to high standards, as the technical designs are subject to quality assurance and quality control procedures on par with international standards.

Although many Khoja Boghra residents have lived alongside each other for 35 years, they were not well connected by road before the paving project. The community development council formed by KMDP have not only facilitated the implementation of the project, but have also led to an increased sense of community among residents.

As resident representatives participate in the council meetings, they have learned more about each other and have developed strong relationships and a sense of community. “I did not know all my neighbors and the level of trust among us was low,” says Saida, a resident. “We all know each other well now and this has increased trust among us and reduced contention.”

Residents also exchange and share their views on relevant issues, and take pride in their neighborhood. “Both men and women expressed their opinions during the implementation of the project,” says Saida. “They also monitored implementation, which improved the quality of the work done. Now people have put lights on their doors. This has made it easier and safer to walk through the lanes at night and has contributed to the overall safety of the neighborhood.”

Others, such as Ahmad who has a food store, have also benefited from the paved lanes. Shoaib is happy that he can stock up his store by renting a vehicle at lower fares. “When the lanes were not paved, the drivers either refused to come here or charged me higher fares up to 150 afghanis to supply my store. Now they happily supply my store for a fare as low as 100 afghanis,” he says. “The drivers charge me less now and I can sell goods at lower prices.” 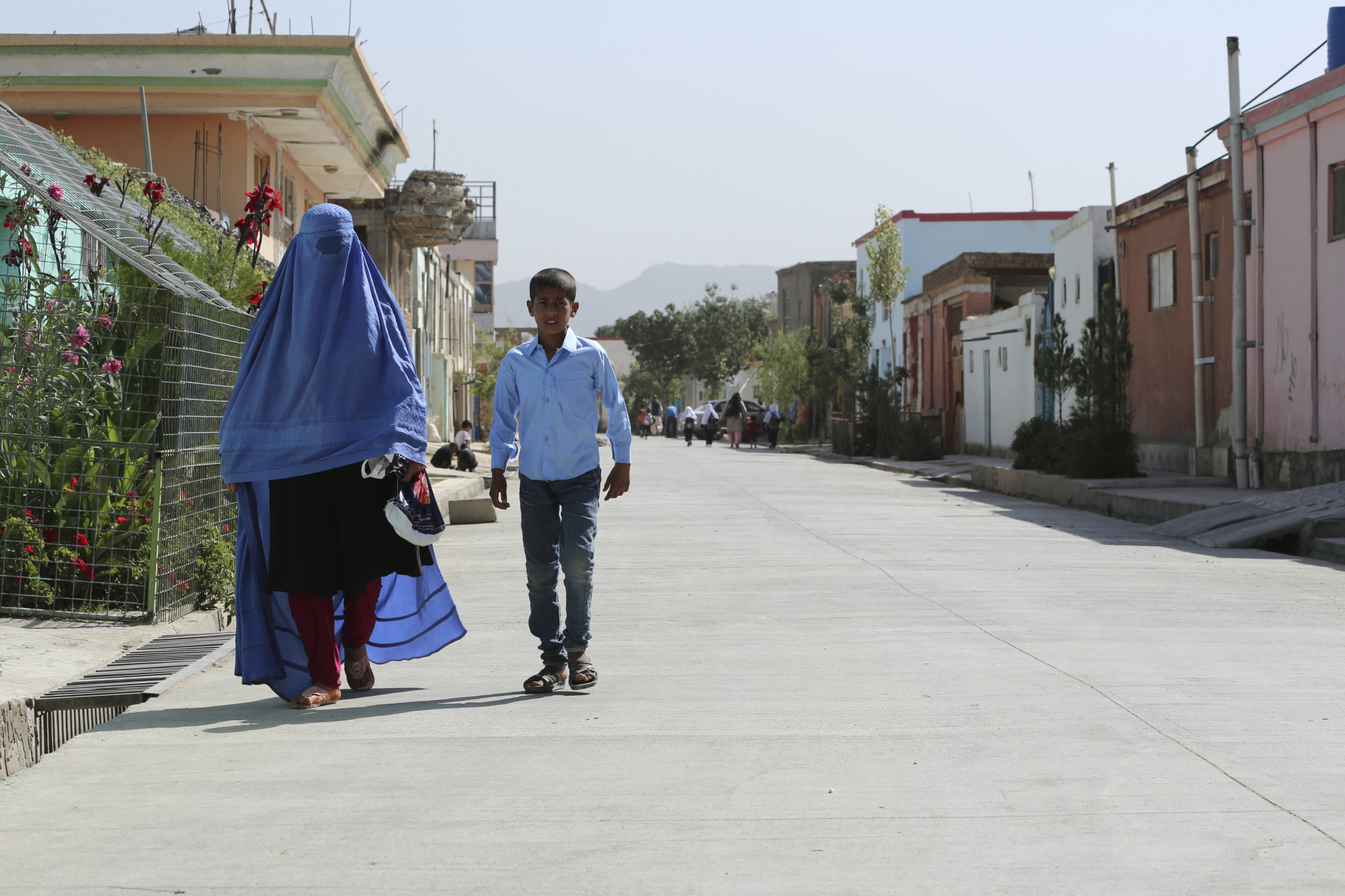