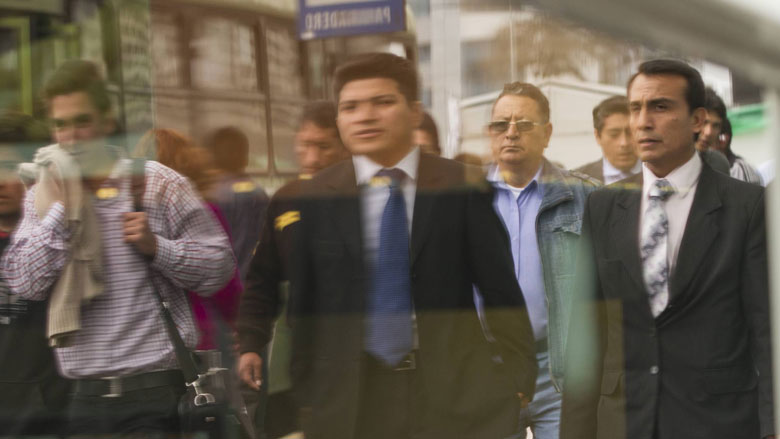 Workers head to their office in Lima

D. Hermorza
Long workdays and workplace stress are threatening the health of millions of Latin Americans.

Seventy years ago the eight-hour workday was standardised. The reasoning was simple, this way workers would have 8 hours to sleep, 8 hours at work and a further 8 hours of leisure time to spend as they wished.

Today it’s more or less a global standard, and, without a doubt, one that Latin America and the Caribbean stick to, with the exception of Belize and Chile, where the law allows for longer workdays.

However, the theory isn’t always put into practice. In Peru, for example, over 48-hour weeks were standard for more than half of workers in 2005, and over 60-hour weeks were the norm for the majority of employees and entrepreneurs in the country.

Workdays of more than 8 hours are also normal for 30% of workers in Argentina and 27% in Mexico, according to data from the International Labor Organization.

What’s more, in today’s hyperconnected world, it’s increasingly common for workers to answer mails from their bosses or clients outside of office hours. The result: a working week that stretched far further than the “usual” 40 hours, and that ends up affecting the employee’s productivity.

According to the World Bank, time pressure and the resulting stress produces mental strain which causes an individual to perform tasks at an intellectual level up to 13 IQ points lower than normal. What’s more, the financial worries of how they are going to get to the end of the month – as many workers who work extra-time feel – also reduce their mental ability. In fact, the difference in performance before and after payday or reaping the benefits of their work can be equivalent of three-quarters of the cognitive deficit – that’s to say slower intellectual functions – produced by the loss of a whole night’s sleep.

Six out of 10 workers in the world’s biggest economies are already affected by some type of laboral stress. According to the WHO, this figure increases to 3 out of 4 employees in countries like Mexico – where more than half of workers over 65 years still work more than 40 hours a week, and just under a quarter of them work over 48 hours each week.

In economic terms, the losses caused by lower productivity, workplace accidents and stress-related illnesses are equivalent to 4% of global GDP, according to the International Labor Organization.

In purely biological terms, stress is the brain’s response to any demand. In order not to waste extra energy and to keep us alert, the body shuts down those functions which aren’t necessary to our immediate survival, such as the immune system and the metabolism. Then, once we are safe, the body returns to normal.

The problems begin when this state of high-alert continues.

The way a job is organised and designed, relationships at work along with the employee’s and employer’s expectations determine how much stress is felt within the work environment. If it seems that one, or more, of these factors are demanding more than the available resources to deal with them, then the situation becomes stressful.

And unless steps are taken to break it, this situation can easily turn into a vicious cycle, given that chronic stress reduces productivity, exacerbates the feeling of imbalance, which in turn, further increases stress until it becomes severely damaging for one’s health.

In fact, the WHO calculates that a quarter of heart attacks each year in Mexico are related to physical, emotional or psychological illnesses caused by chronic stress.

But things are changing. As part of the fight against non-communicable diseases, legislators in different countries have begun to recognise that the office is an important battle ground for combatting obesity, diabetes and heart disease. Less stressful offices help keep employees healthy.

But legislation can only go so far. It’s also important to make life-style changes to stress factors as much as possible. These are just a few recommended by experts: