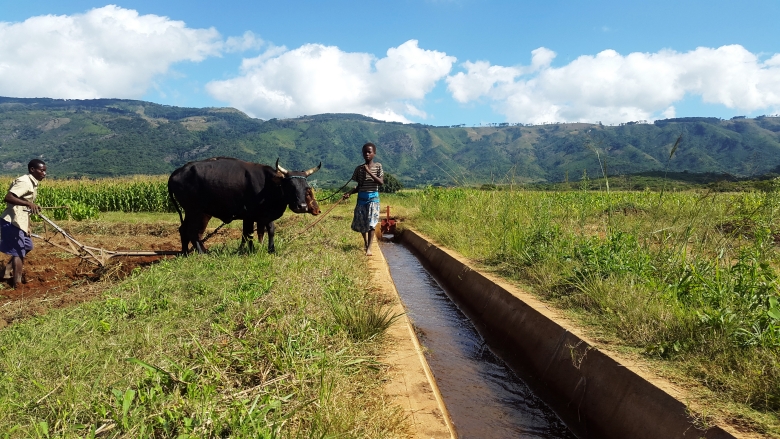 Smallholder farmers in rural Mozambique, most of whom have no access to financial services, stand to benefit the most from the implementation of the new finanical inclusion strategy. Photo by: Aniceto Bila, World Bank

MAPUTO, July 8 2016 – In Mozambique, 24% of adults in urban areas have access to formal financial services, according to the Finscope Consumer Survey of 2014. Access is even lower in rural areas, and women are disproportionately represented in both rural and urban areas alike.

As the country lags behind its regional peers, a new financial inclusion strategy launched during an event this week seeks to expand financial services throughout the country by 2022. The strategy, which benefitted from technical support from the World Bank, provides a roadmap of concerted efforts between public and private financial institutions in support of a greater financial inclusion. The document sets as targets to reach 40% of the population with access to physical or electronic financial service by 2018, and 60% by 2022.

Developed with technical support from the Financial Inclusion Support Framework (FISF) Technical Assistance Program, the financial inclusion strategy is viewed by the country’s financial authorities, including the Central Bank and the Ministry of Economy and Finance, as its most important instrument in its current thrust to accelerate the pace with which financial inclusion is taking place in the country. FISF is a World Bank Group (WBG) initiative supported by the Government of Netherlands and the Bill and Melinda Gates Foundation.

During the event, a citizen asked about the relevance of expanding access to financial services in a country with such a weak domestic economy, and where the majority of the rural poor may not even have money to take advantage of an expanded financial service. Ernesto Gove, Central Bank Governor,  responded with an analogy about the expansion of the mobile phone in Mozambique in recent decades.

When mobile phone operators were introduced a few years ago, Gove said, many doubted their relevance in an impoverished country. But its use has expanded rapidly, including in rural areas. Making financial services available to rural areas could help spark small businesses, improve the ability of households to make savings and invest in durable assets and education; transfer and receive money from relatives, among other benefits, he said.

“It takes a teacher in a remote district of this vast country a trip to the provincial capital to withdraw money from his salary as many times as he or she needs to pay for medicines or cater for other basic needs, which reduces the time that teacher actually spends teaching,” he said, emphasizing the impact of lack of access to financial services on productivity.

The strategy has three pillars; access and use of financial services, strengthening of financial infrastructure, and consumer protection and financial education. The successful implementation depends on the ability of the state institutions to ensure a conducive inter-institutional coordination; adequate macroeconomic and legal environments; provision of basic infrastructure; and the  commitment of the private financial sector operators.

The strategy builds on an already prolific collaboration between various stakeholders which has resulted in a number of reforms including, but not limited to, the following:

The strategy aims to  instill a greater dynamism in the current collaboration between public and private institutions, and build on existing positive results. Under the FISF Program, the World Bank Group will continue to support the government and Central Bank in the strategy’s implementation, including in the monitoring and evaluation framework, the promotion of mobile financial services and access to finance for micro small, and medium enterprises, consumer protection and financial literacy, and working in close coordination with the other donor partners and private financial institutions.

Mozambique is also among the 25 countries the World Bank Group and partners have prioritized in the Universal Financial Access by 2020 initiative. The goal of this initiative is to enable access to a transaction account to store money, and send and receive payments by adults who aren’t a part of the formal financial system. At the national level, more than 50 countries have made commitments to financial inclusion since 2010, while more than 30 have launched or are developing a national financial inclusion strategy.

FISF supports technical assistance to accelerate and increase the effectiveness of reforms and other country-led actions to achieve national financial inclusion goals and targets.  Launched in April 2013, the initiative currently eight countries, out of which seven are among the 25 priority countries under the UFA initiative. FISF has initial funding of $25 million from the Netherlands Ministry of Foreign Affairs, and $5.7 million from the Bill & Melinda Gates Foundation.