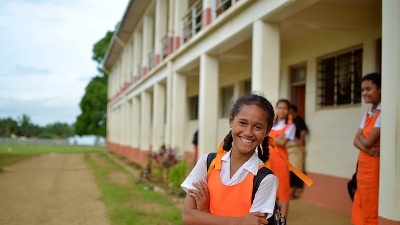 Girls with little or no education are far more likely to be married as children, suffer domestic violence, and live in poverty than better-educated peers.

Washington, August 11, 2014—Educating, empowering, and employing the largest-ever generation of young people is vital to ending poverty and boosting shared prosperity—the World Bank Group's twin corporate goals. New impact evaluation (IE) briefs by the World Bank Group (WBG), released ahead of International Youth Day 2014, shed new light on what works in development interventions targeting girls and young women, who still account for a disproportionate share of the world’s poor and face persistent inequalities at home, school, and work that help keep them and their families in poverty.

Meeting the needs of the 1.8 billion people now aged 10 to 24 and helping them achieve their productive potential “will define the world’s future,” UNFPA Executive Director Babatunde Osotimehin has said.

Despite recent advances in important aspects of the lives of girls, pervasive challenges remain, frequently as a result of widespread deprivations and constraints. These often violate girls’ most basic rights and are magnified and multiplied by poverty and lack of education.

This report and these new research briefs highlight the importance of empowering and investing in girls and young women, which conveys broad benefits across generations.