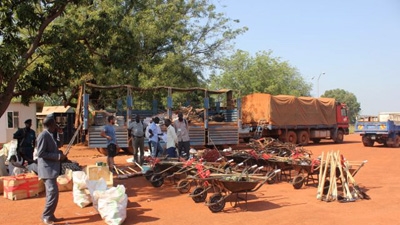 Recently distributed “start-up kits” are tailored to help ex-combatants engage in sustainable livelihood in line with the vocational training they received.

JUBA, December 9, 2013 – In September, more than 280 ex-combatants graduated from the Mapel Transition Facility after three months of training in a number of vocations, including carpentry, animal husbandry and agriculture, as well as literacy, numeracy and general life skills training. As a clear sign of commitment to the new Disarmament, Demobilization and Reintegration (DDR) process, South Sudan President Salva Kiir Mayardit led a government delegation of key ministers and senior military officers to congratulate the ex-combatants at their graduation.

In his speech at the graduation ceremony, President Mayardit congratulated the participants and said through DDR, the ex-combatants are “transformed into civilians empowered to win the war for economic liberation of this war-torn and newborn nation.” President Mayardit also underlined the government’s commitment to DDR by saying DDR “is a top priority government program with my unequivocal support”

South Sudan faces a number of development and humanitarian challenges. In addition to the region’s fragile situation, local strife over livestock, the row over the Abyei region, border demarcation issues and the unresolved dispute with Sudan over the oil pipeline add further layers of complexity. The country’s leadership is committed to the new DDR program which has been encouraging to both South Sudanese and international partners, including the World Bank’s Transitional Demobilization and Reintegration Program (TDRP), a multi-donor initiative supporting the return of ex-combatants to civilian life.

An important component of South Sudan’s new DDR phase is the Pilot Reintegration Project, which is designed to improve ex-combatants’ livelihoods while facilitating their socio-economic reintegration through follow-up trainings on cooperatives and business skills. The project is piloted by the World Bank’s TDRP in collaboration with South Sudan National DDR Commission.

As part of the reintegration project’s first phase, ex-combatants attended their final classes on entrepreneurship and life skills a week before their graduation. According to Gautam Raj Jain, who led the Project’s training component, the ex-combatants were very excited, motivated, and were already discussing potential business partnerships and income generating activities they will be undertaking in their communities.

The second phase of the Pilot Project started on September 23, 2013, with ex-combatants receiving follow-up trainings in their communities to further support their socioeconomic reintegration. Both ex-combatants and community members will have the opportunity to learn more about setting up cooperatives, creating partnerships and managing them as well as business skills. An important milestone of the Project was reached after a joint team of NDDRC, World Bank/TDRP and implementing partner UNICON staff recently distributed “start-up kits” tailored to help ex-combatants engage in sustainable livelihoods. The kits, which are aligned with vocational trainings received at the Mapel Transitional Facility. For example, graduates who were trained in auto-mechanic received start-up kits which included tools such as hydraulic jacks and sets of screwdrivers and spanners, while a graduate interested in doing electrical work received a kit with hammer drills and other electrical equipment.

The Project also aims to develop lessons-learned that can be applied to future DDR programs and instil a system of DDR Reintegration Management that can live beyond the pilot phase. More importantly, the project puts national leadership at the core as past experiences have shown that national leadership is key to success and sustainable results. It is expected that with this project, South Sudan’s National DDR Commission will further develop the country’s new DDR program which seeks to demobilize and reintegrate more than 50 thousand members of organized forces in the coming years.

What is DDR and Why DDR?

DDR, often quietly, lays the foundation for peace, stability and development by repairing socioeconomic structures that war and conflict destroy. Human security, conflict prevention and socioeconomic development lie at the core of DDR programs. It is, however, often argued that DDR is essentially about security sector reform, reducing arms and downsizing military forces and that, in many ways, it is a technical process. But, there is also a human element to DDR. Reintegration connects ex-combatants with communities, giving them skills and hope, and more importantly, assists them in leaving behind conflict and war to join society as civilians. As the countries recovering from conflict go through war-to-peace transition, the ex-combatants go through a transition of their own: a transition from conflict to peace and hope in a civilian world.