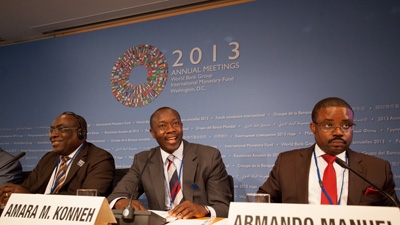 Finance ministers from Liberia, Côte d’Ivoire, Gabon and Angola headlined the briefing and discussed the impact of the global economy on the region and their countries.

“Developments in the global economy remain critical for Africa’s growth”, said Amara Konneh, Minister of Finance of Liberia. Konneh expressed concern about the uncertainty regarding the unwinding of unconventional monetary policies and the threat of potentially devastating budgetary challenges in the United States. These, he said, if left unaddressed “could derail the fragile recovery we experienced last year across the world.”

According to Daniel Kablan Duncan, Prime Minister and Minister of Economy and Finance of Côte d’Ivoire, “The international business environment in which Brazil, Russia, India, China and South Africa (BRICS) and emerging countries have decreased growth, while developed countries have been subjected to the 2008 crisis, has affected Africa.”

The Ministers observed that despite economic and political uncertainties, Africa, for the time being, shows some resilience, with growth rates averaging at 5 percent, which can be explained by the efforts carried out in Africa in recent years, especially through structural reforms.

“Nonetheless, these reforms need to be strengthened because 5 percent growth cannot allow Africa to eradicate poverty nor reduce it in any significant manner,” said Luc Ayoubi, Minister of Finance of Gabon.  “So, African countries will continue with these structural reforms and to invest in infrastructure.”

While infrastructure was seen as key to improving the business environment and attracting private investment, private sector development was viewed as a source of job creation and revenue for the respective governments.

The ministers of Gabon and Côte d’Ivoire highlighted the fact that their countries were getting ready to transition to emerging countries.  Gabon has set a target to be an emerging country by 2015 and will devote 40 percent of its budget resources to reinforcing the country’s infrastructure sector, strengthening human capital, and governance.

Côte d’Ivoire aims to make this transition in 2020. In 2012, the country had a 9.8 percent growth rate—nearly a double digit growth. The government’s efforts are focused on ensuring strong growth and reducing poverty by 50 percent by the year 2015.  The insecurity index has fallen to 1.4 which is evidenced by the return of the African Development Bank headquarters to Abidjan.  The country continues its efforts to ensure peace and security, including achieving national reconciliation and reconstruction as well as economic progress.

President Alassane Ouattara of Côte d’Ivoire is the current Chairman of ECOWAS—West African Economic Community and the country continue to play an important role in West Africa. Responding to a question on the importance of regional trade, Duncan acknowledged that the five regions in Africa should work on merging tariff accords when trading with the rest of the world, so that intra-Africa trade would have value added.   Basic infrastructure should also be developed to ensure intra-Africa trade.

Answering the same question, Konneh highlighted the need for a greater emphasis on regional integration, giving an example of the four countries in the Mano River Union—Côte d’Ivoire, Liberia, Guinea, and Sierra Leone—affected by conflict, are collaborating on key infrastructure projects like the West African Power Pool.  “These countries unite to bring in power from Cote d’Ivoire, through Liberia, into Guinea and Sierra Leone”, he mentioned.

He also recommended that a gas pipeline be run along the coast of Africa—much like the internet cable—so that everybody can tap into it to help deal with the energy deficit.