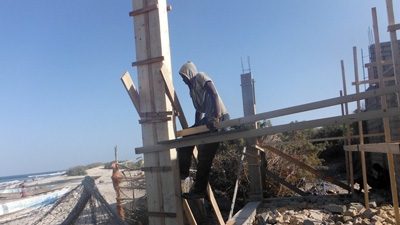 The Tsunami Livelihood Recovery project trained fisher men and women in safe fish handling at sea, proper use of ice boxes in their boats, net and boat repair and maintenance of motors.

Nairobi, October 09, 2013—The eastern coast of Somalia is arguably one of the most challenging places in the world: coastal villages are inaccessible by road, so few services and facilities reach poor families, and lawlessness and piracy make trade and aid nearly impossible.

But, a World Bank project, funded by the Japan Development Fund in 2004, has helped increase incomes by training fishing families along this coast in new fishing techniques, creating better storage facilities that allow them to market their catch beyond their local communities.

“When the tsunami struck the Indian Ocean in 2004, fishing communities off the coast of Puntland lost even the meager incomes they had,” said Abderrahim Fraiji, a senior operations officer in the World Bank’s Post-Conflict & Social Development in the Africa Region and the project’s task team leader.

The Bank piloted the US$1.6 million Tsunami Livelihood Recovery project in three villages benefitting some 1000 families. Fisher men and women were trained in safety and fish handling at sea, proper use of ice boxes in their boats, net and boat repair and maintenance of motors. The project provided processing and cold storage facilities for receiving and marketing fish in the villages, and refrigerated trucks to carry the catch to the nearest town of Bossaso and the state capital, Garowe.

“We wanted to demonstrate that with the right knowledge, equipment and government support, both the government and the poor communities could turn fishing into a profitable business,” said Fraiji. “The country has over 3000 kilometers of coastline, the longest in Africa, and its most untapped resource.”

Despite challenges to implementing the project—including cultural rivalries among villages and difficulty generating electricity and fuel for refrigeration—the project has shown impressive results. Incomes for villagers, for instance, have increased by 20-30%.

“Previously, fishers had no option but to sell their catch at very low prices out at sea to Yemeni traders,” said Jorge Torrens, Fisheries Officer at the FAO in Somalia which implemented the project. “With refrigeration, they can now conserve their catch, reach markets inland and are in a better position to bargain with traders.”

To help put the fishing business on a sustainable path to growth, the project also provided technical support. Each village now has a fisherman’s association and a public-private partnership has been established with the government and local fishers to better manage storage, receiving and marketing facilities.

There’s also an ID pilot system for fishers in pirate-infested waters which is now being expanded for the registration of all fishermen in the Puntland coast, according to Fraiji.

In a country with some of the severest levels of malnutrition in sub-Saharan Africa, the government has also launched an education program to promote fish eating as meat prices rise.

The Tsunami Livelihood Recovery project closes this month, but the public –private partnerships that have been created will ensure the sustainability of the fishers’ livelihoods as new markets and roads continue to improve access to new markets inland.