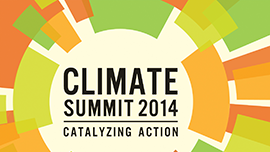 UN Climate Leadership Summit
September 23, 2014United Nations, New York
The UN Secretary-General's Climate Leadership Summit brings together leaders from government and business to work together toward action on climate change. At the Private Sector Forum of the Climate Summit, they will be discussing how carbon pricing can bring down emissions for a safer, healthier world.

One critical step is putting a price on carbon. At the Summit's Private Sector Forum, the focus will be on carbon pricing and the growing support for carbon pricing policies as one of the most effective ways to address climate change. The carbon pricing initiative and statement are available through the World Bank's Climate Change website.

Leaders across the sectors are speaking up for action through carbon pricing:

Shared global prosperity requires robust economic growth without the carbon pollution of the past. To drive this transformation, we need both limits on carbon pollution and a price on carbon, writes Fred Krupp, president of the Environmental Defense Fund. Read more

Leaders from across government and business are sending a clear message to the world this week that climate change is a risk that cannot be ignored, and, importantly, that they are ready to work together to bring down emissions. Read more

Government and Corporate Leaders Share Why They Support a Price on Carbon (Sept. 22, 2014)

Business and government leaders who aligned with the Put a Price on Carbon Statement shared their reasons for supporting carbon pricing. Read more | Watch

When polluting has a price, efficiency and innovation are rewarded. Businesses and governments around the world are taking action by putting a price on carbon. Watch the animation.

It Takes All of Us: Stretching the Space for Political Agreement on Climate Action (Sept. 21, 2014)

The Climate Week activities, and the Climate Summit are beginning to make clear to people that this is an important issue for all of us – that climate change is everybody's business, and that there are ways in which we can feel useful, writes World Bank Group Vice President and Special Envoy for Climate Change, Rachel Kyte. Read more

The People's Climate March drew people from all over the world to New York City today, and you could feel the energy in the air, says Rachel Kyte, World Bank Group Vice President and Special Envoy for Climate Change. Watch

British Columbia Premier: You Can Grow the Economy & Protect the Environment (Sept. 20, 2014)

British Columbia, Canada, implemented a revenue-neutral carbon tax in 2008. Its greenhouse gas emissions and income taxes are down, and its economy has continued to grow, writes British Columbia's Premier Christy Clark. Read more

A carbon price on emissions is a necessary cost to stop the economic and environmental damage being distributed across generations. Capital markets have the ability to finance the transition to a low-carbon economy, writes Frank Pegan, CEO of Catholic Super, an Australian superannuation fund currently managing AU$5.21 billion. Read more

We face an existential challenge with the changes in our climate. The time to act is now, writes Jerry Brown, Governor of California. Read more

What Does Carbon Pricing Success Look Like? Ask These Leaders (Sept. 18, 2014)

Carbon price measures like taxes and cap and trade systems are needed for getting modern and mature technologies into the market, writes Henry Proglio, chairman and CEO of EDF. Read more

Cities Can Lead on Climate Change to Build a More Resilient Future (Sept. 15, 2014)

The airline industry has committed to ambitious targets to improve our environmental performance, and it will meet them through investment of trillions of dollars in new technology with vastly improved fuel and carbon efficiency, through sustainable alternative fuels, and importantly, through carbon trading, writes the CEO of International Airlines Group, parent company of British Airways. Read more

British Columbia's price on carbon has become an example of how to tackle one of the greatest global challenges of our time: building an economy that will prosper in a carbon-constrained world, write Stewart Elgie, professor of law & economics at University of Ottawa and chair of Sustainable Prosperity; Ross Beaty, chairman of Pan American Silver Corp. and Alterra Power; and Richard Lipsey, professor emeritus of economics at Simon Fraser University. Read more

Here in Tokyo, we are extremely concerned about climate change, as it poses a huge threat to our goal of becoming a sustainable and environmentally-friendly city, writes Governor Yoichi Masuzoe. Watch the governor's video and read his arguments for action. Read more

A price on carbon can drive investment toward cleaner, more efficient development. Momentum for it is building in business, investment and government. Read more

Climate finance today is barely half the volume considered necessary, but innovations in business and finance and bold policies are laying the foundations to scale it up. Read more | Infographic

Three key themes emerged from the Peruvian Government’s Climate Finance Week, where there were many reasons to be optimistic that addressing the climate challenge can also create economic opportunities. Read more

Forward-thinking leaders from across business and government are speaking out in support of a price on carbon to lower climate-damaging emissions and encourage clean-energy innovation. Read more

The World Bank Group, business groups, and investors have called on governments and corporations to support a price on carbon. So what does that mean, and how does carbon pricing work? Read more

About 40 countries and more than 20 cities, states and provinces have or plan carbon pricing as a cost-effective way to drive down greenhouse gas emissions.

Pricing Carbon: It’s About Our Economy & Our Future