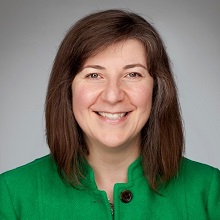 Ms. Levonian also serves as Executive Director for Canada, Ireland and the Caribbean at the International Monetary Fund (IMF) since November 1, 2018.

Prior to joining the Bretton Woods Institutions, she served as Deputy Minister of Employment and Social Development from May 2016 to October 2018 She also served as the chair of the Labour Market Information Council, which identifies pan-Canadian priorities for the collection, analysis and distribution of labour market information during the same time period.

Prior to her appointment as DM, Ms. Levonian served as the Senior Associate Deputy Minister of Employment and Social Development and Chief Operating Officer for Service Canada for close to two years. She also served as the Chair of the Board of Management and Renewal Sub-Committee on Public Service Engagement and Workplace Culture for four years. In this capacity, she has helped shape the Blueprint 2020 exercise and ensured an engaged public service that is world-class and equipped to serve Canada and Canadians now and into the future.