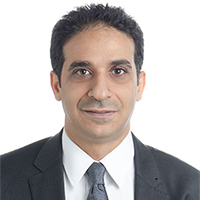 In Saudi Arabia, Mr. Alogeel worked in various capacities at the Saudi Arabian Monetary Authority, including as the Head of the International Financial Organization Division, and Secretary of the Board of the Gulf Monetary Council. Prior to that, he served as a Supervisor, Vice-President Office for Technical Affairs, SABIC Steel & Iron Company.