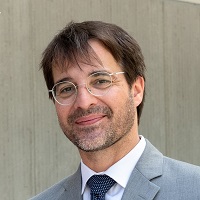 Dominique Favre, born in 1971, is a Swiss Ambassador currently serving as Executive Director at the World Bank Group in Washington DC, representing the constituency of Azerbaijan, Kazakhstan, the Kyrgyz Republic, Poland, Serbia, Tajikistan, Turkmenistan, Uzbekistan and Switzerland. Before joining the World Bank, he was Deputy Permanent Representative and Head of Sustainable Development and Humanitarian Affairs at the Permanent Mission of Switzerland to the United Nations in New York from 2017 to 2020. During this time, he was elected as Vice-President of the Executive Board of UNDP, UNFPA and UNOPS in 2018, and as Vice-President of the UNICEF Board in 2020.

From 2013 to 2017, Dominique Favre served as Chief of Staff for Regional Cooperation, and then as Deputy Head of Global Cooperation at the Swiss Agency for Development and Cooperation (SDC) in Bern. As such, he was actively involved, in conjunction with the Swiss State Secretariat for Economic Affairs, in Switzerland’s work in the World Bank Group and other international financial institutions.

Between 2008 and 2013, Dominique Favre was first Deputy Head and then Head of the Swiss Enlargement Contribution Office in Warsaw.

In 2004, he was appointed Deputy Director of the Swiss Cooperation Office in La Paz, Bolivia (until 2008), after having worked in several functions at SDC’s headquarters in Bern.

Dominique Favre joined the Federal Department of Foreign Affairs in 2001. After studies, he worked at the Federal Competition Commission in Bern. He holds a Master of Law degree from the University of Fribourg.