The quarterly newsletter Inequality in Focus continues to explore aspects of inequality in selected countries. In this issue, we take a closer look at the World Bank’s goal of achieving “Shared Prosperity”.

The World Bank recently adopted new metrics for achieving the goal of ending global poverty. Specifically, this goal is to be reached by ending extreme levels of poverty and promoting “shared prosperity.” Ending extreme poverty has been defined as reducing “the percentage of people living with less than $1.25 a day to no more than 3 percent globally by 2030.” In contrast, promoting shared prosperity is defined as “fostering income growth of the bottom 40 percent of the population in every country” (World Bank, 2013).

This focus on improving the income growth of the poorest 40 percent is a departure from the traditional practice of focusing on per capita GDP growth rates. GDP growth rates are useful summary measures of a society’s economic progress but they are unable to capture the distributional aspects of growth: It is entirely possible for a country to be growing rapidly on average while the poor within the country see their incomes stagnate.

These goals represent a significant reinvigoration of the Bank’s commitment to working toward improving the living standards of the most downtrodden populations with a sharper equity lens, even in wealthier countries where instances of extreme poverty or destitution may be low. Recently, a group of World Bank economists, Ambar Narayan, Jaime Saavedra-Chanduvi, and Sailesh Tiwari, explored the relationship between shared prosperity with growth, inequality, and inequality of opportunity. They traced potential pathways toward achieving shared prosperity (Narayan, Saavedra-Chanduvi, and Tiwari, forthcoming 2013). The authors discuss their findings below.

There is a high, positive association between income growth of the bottom 40 percent and growth in average household income (figure 1). However, in situations where inequality is high or rising, especially when it coexists with limited access to opportunities for those who are less well-off, the growth of average incomes will not accrue proportionately to the bottom segments of the distribution. Thus, shared prosperity, understood in this way, is not an agenda of redistributing an economic pie of a fixed size. Rather, the pie must be expanded continuously and shared in such a way that the welfare of those at the lower end of the income distribution rises as quickly as possible. Shared prosperity also requires that progress is sustainable from generation to generation, in terms of the environment, social inclusion, and fiscal prudence.

Second, the magnitude of the correlation is higher for the moderate poverty line. This suggests that, on average, the bottom 40 percent of a country has a larger overlap with the population living below $2.50/day, which is the poverty line more applicable to middle-income countries, than it does with those living in extreme poverty ($1.25/day).

Finally, the correlations are imperfect (-0.28 and -0.44 respectively for $1.25 and $2.50 respectively), regardless of the poverty line used, suggesting that the shared prosperity measure is different from an absolute poverty measure. The lower correlation between reducing extreme poverty and promoting shared prosperity (measured through income changes of the bottom 40 percent) confirms that these are different goals, each with distinct development challenges.

What do we know about shared prosperity in recent years?

Finally, low- and lower-middle-income countries appear to have had less success in boosting shared prosperity than upper-middle and high-income developing countries during this period. The growth rate of the bottom 40 percent in the median country in the richer group was 5 percent, compared to 2.9 percent for the low- and lower-middle-income group. This is fairly comparable to what is observed for the average growth rate as well: The median country in the richer group grew by 4.5 percent, compared to a much slower rate of 2.6 percent for the poorer group of countries. This suggests a more nuanced view on the perception of convergence between the rich and poor countries: While there has been some convergence, other inequalities are being crerated as incomes within developing countries, particularly for the poor living there, are growing but at much slower rates than for their counterparts in wealthier nations.

How can the shared prosperity indicator be useful in guiding policies to improve the welfare of the less well-off?

What drives inequality and how does it affect poverty reduction efforts and economic growth? The World Bank's "Inequality in Focus" newsletter seeks to answer these and many other questions.

About Inequality in Focus 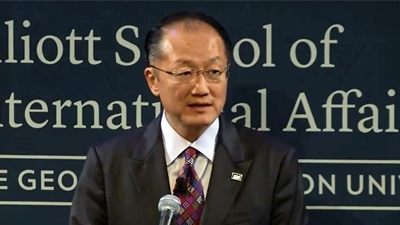