An Impact Evaluation Sparks a New Work Idea for Women 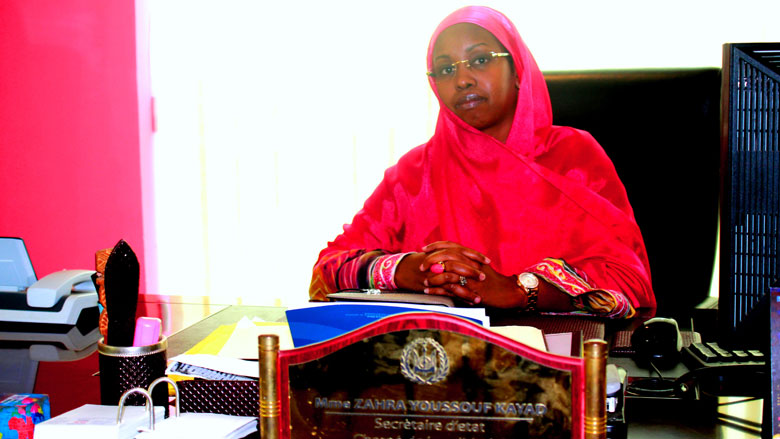 Walk into Zahra Youssouf Kayad’s office in the African capital of Djibouti City and you’ll see colorful local artwork on the walls, inside frames. One picture, for example, depicts a women seated outside while she makes straw brushes, or sweeps, used to clean the inside of homes. Another frame contains traditional cowhide shoes. “Whenever I go to other parts of the country I always ask to see the local crafts,” says Ms. Kayad, whose ministry oversees Djibouti’s fight against poverty.

Djiboutian women have made these handicrafts for generations. And these traditional crafts play a central role in an innovative new government program here. A little background, first: Under Ms. Kayad, the Government of Djibouti with support from the World Bank has implemented a cash-for-work  program for women, in tandem with community meetings that promote nutrition for pregnant women and young children. World Bank researchers are wrapping up an evaluation of this nutrition-sensitive social safety net program to see how effective it’s been in combatting malnutrition, which is widespread. In doing so, they’ve also stumbled onto an untapped opportunity: as part of the cash-for-work program, the women are creating beautiful baskets, belts and other handicrafts using grass and pearls. Djibouti officials realized they could help women throughout the country turn what’s usually done on a private, small-scale level into a business opportunity that could empower women financially. This realization has helped inspire a new handicrafts program to close the gap between women who make handicrafts—and usually have no way to sell them—with potential buyers throughout the country and abroad.

In May 2015, the World Bank approved a $2.73 million grant from the government of Japan to fund a brand new employment program for young people and women. Among other things, this new program will bolster Djibouti’s handicrafts sector, broadening the market for these crafts, while also improving their quality. In an interview, Ms. Kayad discusses what’s being done and why it matters. The interview has been edited for length and clarity. 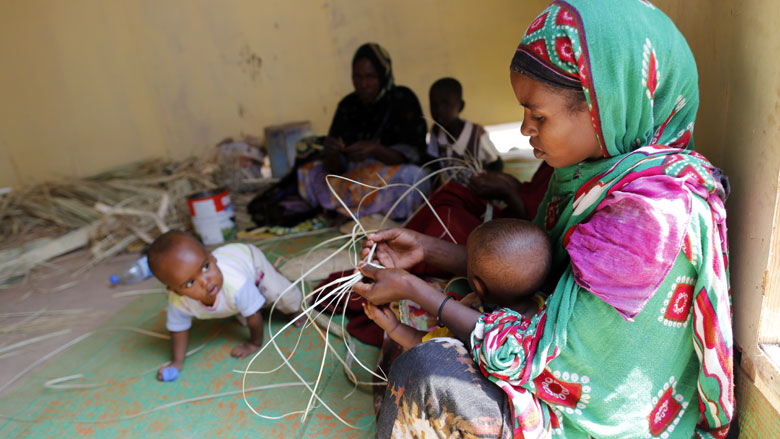 A woman is creating a basket while supervising her children, in Balbala, Djibouti City, Djibouti on February 5, 2014. She is a participant of the Social Safety Net program in Djibouti, which includes nutrition meetings and public works.

Though the final results of the impact evaluation of the original cash-for-work program aren’t in yet, what have you learned so far that’s surprised you?

It has been amazing to see how empowering the program has been. The woman who enrolled are earning income for their household, and that’s given many of them financial independence for the first time. Earning money independently has allowed them to have a say in where the money goes.

Why is financial independence so important for women in Djibouti?

The women in the cash-for-work program have reinvested their earnings into the household. They spent the money on themselves and their children, buying more nutritious foods, for example, which has improved their family’s health and wellbeing. That financial independence has been an incentive for them to learn more; it’s opened up new possibilities and new horizons.

It sounds like the program has provided a tremendous boost of confidence for the women. What sort of new possibilities are they now exploring?

The woman have experienced firsthand that if they can learn one new activity—whether it’s crafts or street sweeping—they can learn another. And that has encouraged them to try new things, like opening their own small enterprise, such as producing and selling brushes. The program has also given them the chance to receive credit and open small enterprises, such as selling clothes.

What gave you the idea to offer this craft program?

In preparing to launch the cash-for-work program, we learned that a lot of women were already practicing handicrafts as a way of generating extra income for their household. They already have the skills to make very good handicrafts and so we wanted to develop a program that would help the women increase the quality of their crafts while also making them available to a wider market.

What are some of typical crafts women make?

For generations, since nomadic times, women in Djibouti have been using grass and pearls to make beautiful crafts. Grass is used to make baskets—either for shopping or as decoration—and pearls are commonly used for jewelry. Women also use wood to make objects for decorations as well as traditional hairbrushes.

What obstacles were women coming across when trying to sell their crafts?

First and foremost, they don’t have access to a market that’s wide enough. Many of these women live in rural areas and so they need to travel to the capital, which can take up to a day, and even then there are no regular fairs or exhibitions with a wide customer base. There are small associations to help women bring their wares to the local market, but these are small organizations with only a limited reach.

Another problem is that often the finished product isn’t of a high enough quality. Either the design isn’t that attractive or it’s just not as useful as it needs to be—like a basket that’s not large enough to use at the market. As part of the program, professional designers will work with the women to modernize their products and make them more appealing to a larger consumer base—either in Djibouti or abroad. The designers will also teach the women how to produce new, more in-demand crafts that rely on skills the women already have.

What’s the plan for helping these women sell their crafts?

First of all, we will conduct more in-depth market research to really understand what kinds of products would be most in demand by local and foreign customers. The program will also help the women at stores and markets, and link them up to potential bulk buyers such as hotels and retail shops. Finally, we hope to develop a brand-management strategy to foster the image of “Handmade in Djibouti.”

What are some of your ideas for new crafts that you think women in Djibouti can make for wider distribution?

I would love to see the women use the grass weaving and pearls to make purses—maybe a clutch that is studded in pearls. I also think we could create beautiful jewelry. I have many necklaces and earrings I’ve bought over the years from Western Africa. In Djibouti, the necklaces women make tend to be a triangular shape; but if the women used traditional designs to create circular necklaces that are more widely worn, I think we could tap into a demand for interesting, unique jewelry.  In the past, these crafts were bought largely by foreigners, but increasingly Djiboutians want to rediscover their roots and their cultural heritage and are buying them as well.

You clearly have a passion for crafts. Is that something you do in your free time—though I’m guessing you don’t have a lot of that!

I don’t make crafts, but some of my earliest memories are sitting with my maternal grandmother when I was about 5, while she made traditional dolls.  My paternal grandmother was also devoted to crafts. She founded an association in the city of Dikhil with other women that taught women to make cultural crafts such as table decorations, necklaces, and traditional clothes. We’re waiting to see what happens with this handicrafts program. If it’s successful it might be expanded to other parts of the country. In that way, I hope to continue my grandmothers’ legacy.

This appeared in an abridged form on the Middle East and North Africa Voices.