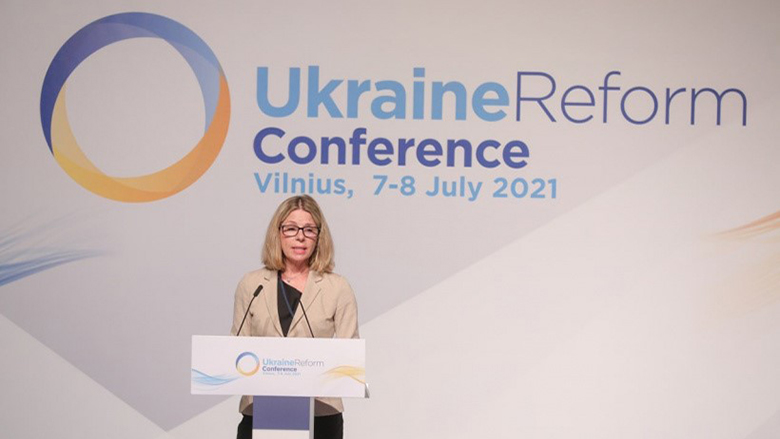 It is very good to be here today for my first Ukraine Reform Conference.

I know how important these events have been toward helping align Ukraine’s partners around the country’s key reform priorities and Euro-Atlantic aspirations.

The past 16 months have tested our resilience to sudden, unexpected, and prolonged shocks. For a country - its economy and social fabric - resilience is a reflection of how well it has prepared for an uncertain future.

A look around the globe reveals how resilient countries have been to the COVID-19 pandemic. Some have done well, others less so. The costs of having done less well are almost always borne by the poor. It is for this reason the World Bank and the international community more broadly urge—and provide support to—countries to undertake economic and structural reforms, not just for today’s challenges but also for tomorrow’s.

Ukraine joins countries that have strived to undertake significant reforms to transform their economies. This is particularly true since the Post-Maidan crisis of 2014-2015. And it may seem to many of us that there are few countries where the reform process is tougher.

The good news is that thanks to these reforms, Ukraine is better positioned to emerge from the pandemic than many expected. Our initial projection in the World Bank, for example, was that the economy would contract by nearly 8 percent in 2020; the actual decline was half that. Gross international reserves at end-2020 was US$10 billion higher than programmed. Most important, there are far fewer poor than anticipated.  More on this shortly.

Let’s consider three reform areas which have contributed to these outcomes.

First, no area of the economy contributed more to the economic crisis of 2014-2015 than the banking sector. Powerful interests captured the largest banks, distorted the flow of capital and strangled economic activity. Fortunately, Ukraine developed a framework to resolve and recapitalize banks and strengthen supervision. Privatbank was nationalized and is now earning profits. Most important, it is now being prepared to be privatized.

Second, COVID halted and threatened to reverse a five-year trend in poverty reduction. Fortunately, the authorities responded. The government had been spending around 4.7 percent of GDP on social programs with limited poverty impact. Nearly half these resources went to an energy subsidy that expanded to cover one-in-two of the country’s households. The Government restructured the system by raising tariffs and targeting resources to the poor. This is working. Transfers going to the poorest one-fifth of the population are rising significantly—from just 37 percent in 2019 to 50 percent this year and are projected to reach 55 percent in 2023.

Third, the health system itself. Ukrainians live a decade less than their EU neighbors. Epidemiological vulnerabilities are exacerbated by a health delivery system centered around outdated hospitals and an excessive reliance on out-of-pocket spending. In 2017, Ukraine passed a landmark health financing law defining a package of primary care for all Ukrainians, free-of-charge. The law is transforming Ukraine’s constitutional commitment to free health care from an aspiration into specific critical services that are actually being delivered.

The performance of these sectors, which were on the “front line” during COVID, demonstrate the payoff of reforms. The job now is to tackle the outstanding challenges.

The first is to reduce the reach of the public sector in the economy. There are some 3,500 companies owned by the state—most of them loss-making—in sectors from machine building to hotels. Ukraine needs fewer SOEs and those that remain must be better managed.

Ukraine has demonstrated progress. The first round of corporate governance reforms has been successfully implemented at state-owned banks. And, in the energy sector, Naftogaz was unbundled in 2020. The electricity sector too is now being gradually liberalized. Tariffs have increased and reforms are expected to support investment in aging electricity-producing and transmission infrastructure. Investments in renewable energy are also on the rise.

But there are areas that need attention and here I will focus on two. First, we urge that management functions of SOE supervisory boards and their members remain free of interference and are given the space to do their job. We also urge that the National Bank of Ukraine maintains its role as an independent overseer of the banking sector. The World Bank Group has supported reforms to improve the governance of SOEs and SOBs in Ukraine in the past and will remain steadfast and consistent in our advice that progress in this area cannot and should not be reversed.

The second challenge is to strengthen the rule of law – and many other speakers have stressed this as well. Over recent years, the country has established—and has committed to protect—new institutions to combat corruption, which were widely supported by the international community including by the World Bank. These institutions – including the National Anti-Corruption Bureau of Ukraine and the High Anti-Corruption Court – are still maturing and they need to be allowed to function professionally and independently. And they need to be supported by a judicial system that is unbiased, professional and independent. The move to re-establish an independent High Qualification Council is a welcome step in this direction.

Let me conclude by addressing what will be the greatest test of resilience for Ukraine, and all of us, and that is climate change.

President Zelenskyy has announced his commitment to achieving carbon neutrality and has set ambitious targets for Ukraine’s Nationally Determined Contributions to the Paris Agreement.

This is a welcome ambition that can be realized by – in part - deepening reforms in the energy and transport sector, including continuing to deploy cleaner energy solutions and opening the state-owned rail company to competition. Also, we look forward to working with our counterparts in Ukraine to prepare a new product we have recently launched – the Country Climate and Development Report. Ukraine will be among the first 25 countries globally that we do this report for, and one of four in the Europe and Central Asia region. The report will look at aligning climate action and development efforts.

In conclusion, it can be easy to grow frustrated with the pace of reform in Ukraine. Two steps forward followed often by one—and sometimes two—steps back can lead to pessimism.

But if we look back over the past five years at the scale of Ukraine’s challenges; are realistic about the forces resisting progress; and acknowledge what has been accomplished, we should remain confident about the country’s future direction.

There is too much at stake to turn back. We know from our work that a child born in Ukraine today will be only 63 percent as productive when she grows up as she would be if she enjoyed complete education and full health. That needs to change.

And we know that even at the post-Maidan recovery growth rates it will take almost a century to reach the current levels of income of Germany and about fifty years to reach Poland. That needs to improve.

Ukraine has taken great strides to accelerate these outcomes. It has much more to do.

We at the World Bank are proud to have supported Ukraine in its efforts to build a better future. And we too, look forward to having much to do, hand-in-hand with Ukraine, as it charts the road ahead.

Thank you very much.