It is a pleasure for me to be here today at COD (Center for Openness and Dialogue) and having the opportunity to take part in this special event, the signing of a Memorandum of Understanding (MoU) between the Public Procurement Office and the Labor Inspectorate. This MOU will create more awareness among economic operators about their obligations to abide by the Labor Code and treat their employees in a fair manner regardless of their gender and other characteristics.

The World Bank Group and the French Development Agency are strongly committed to fostering corporate responsibility and are actively supporting the Albanian government in their efforts to promote nondiscrimination. We congratulate the PPA and the Labor Inspectorate on reaching this important milestone.

For many years now, the concepts of non-discrimination and equal opportunity at work have been part of the international community’s aspirations. These concepts are rooted in universal principles of human rights, fundamental freedoms, and equality. They are also rooted in the belief that all employment decisions should be based on the worker’s ability to do the job instead of their personal characteristics, including gender, race, color, religion, ethnicity, disability, age, sexual orientation, and others.

Discrimination is bad for business. It restricts the available pool of workers and skills and it can isolate a company from the community in which it operates.

Discrimination can occur in overt ways, such as through harassment and victimization, but more often than not, it arises in subtle work-related decisions, such as access to training, remuneration, hours of work and rest, paid holidays, maternity leave, etc.

Most countries, Albania included, have nondiscrimination legislation. Indeed, Albania has a set of strong nondiscrimination articles in the Labor Code, that all employers are obliged to comply with. But unfortunately, many employers fail to comply with these provisions, and as a result, they prevent their workers from developing their full potential and their businesses lose profits.

Public procurement policy can be a powerful tool to promote the equal treatment of workers. Public procurement accounts for around 7.5% of Albania’s GDP, or about US$700–US$800 million in annual public spending. Over 200 thousand local and foreign firms are registered with the Public Procurement Agency (PPA).

As such, Public procurement has been a successful instrument for enforcing labor regulations such as the minimum wage and mandatory social security contributions.

Now, the PPA is updating the standard bidding documents [for tenders valued at 8 million lek or more] to include a self-declaration specifying that all employment contracts relevant to the tender comply with the nondiscrimination and gender equality provisions of the law and adhere to the principle of equal pay for work of equal value.

In addition, the PPA is strengthening its collaboration with the Labor Inspectorate through the Memorandum of Understanding signed today, to increase information sharing on the compliance of firms benefiting from public procurement contracts with labor legislation.

In this way, the Albanian Government is sending a strong signal that to do business with the state, employers need to ensure that they are following the law and treating their workers equally.

In Albania, greater diversity in the labor market would bring enormous economic gains. For instance, women’s limited labor market participation costs them about 25 years of employment, on average, over the course of their lives against 16 years among comparable workers in the EU. If women had similar employment rates as men, Albania’s annual GDP could be as much as 17% higher.

Thank you for the opportunity to host this signing ceremony and look forward to our continued collaboration in this agenda. 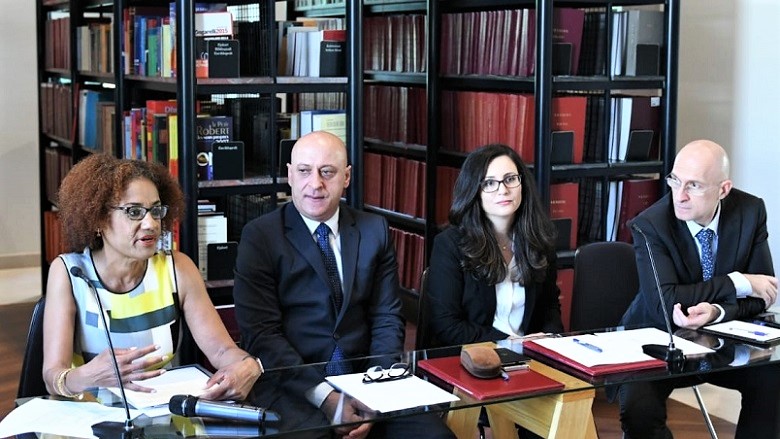