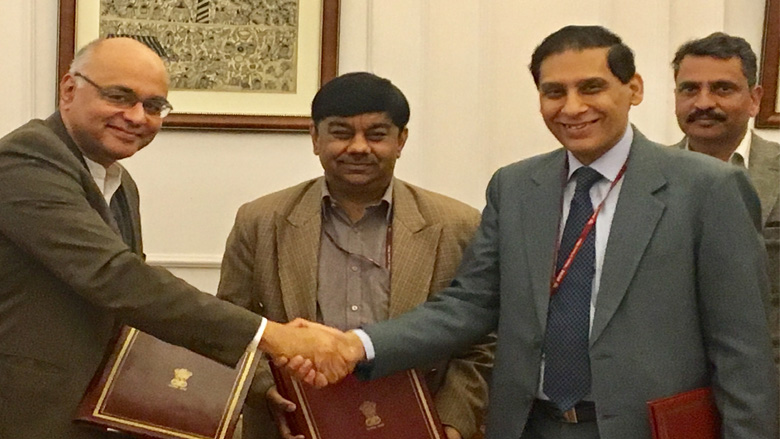 New Delhi, February 15, 2019 – The Government of India, Government of Himachal Pradesh (GoHP) and the World Bank today signed a $40 million loan agreement to help bring clean and reliable drinking water to the citizens of the Greater Shimla area, who have been facing severe water shortages and water-borne epidemics over the last few years.

The Shimla Water Supply and Sewerage Service Delivery Reform Programmatic Development Policy Loan 1 is expected to improve water supply and sanitation (WSS) services in and around the iconic hill city of Shimla.

“,” said Sameer Kumar Khare, Additional Secretary, Department of Economic Affairs, Ministry of Finance.  “The Government of Himachal Pradesh has developed this comprehensive policy and institutional reform program to put in place systems to improve water supply and sewerage services in an efficient and sustainable manner,” he added.

Shimla’s water supply infrastructure with a capacity of 40 million litres daily (MLD) is unable to meet the current demand of 56 MLD.  As elsewhere in urban India, around half the available water is lost to leakages and unauthorized siphoning.  As a result, water supply reaches citizens only once in two days and for limited hours.  With at least 30-40% of the city’s population of around 200,000 not covered by the sewerage system, sanitation has also emerged as a public health issue in Shimla.

"by creating an autonomous, professional company that answers to the urban local body,” said Junaid Ahmad, World Bank Country Director. “This DPL will help SJPNL orient itself as a customer-focused utility able to provide reliable water and efficient sanitation to the citizens of Shimla.”

The Bank-supported project, the first in a series of three development policy loans (DPL), will support the GoHP’s program of policy and institutional reform needed to bring continuous, pressurized (24x7) water supply, efficient sewage collection and treatment for all households in the Greater Shimla Area.

As the first step, the state government has, jointly with the Shimla Municipal Corporation, set up a dedicated utility which will take over WSS services for the city; these responsibilities were hitherto fragmented between different agencies and departments, leading to blurred accountability.  This utility -- the Shimla Jal Prabandhan Nigam Ltd or SJPNL – will run the city’s WSS system. Policy decisions such as setting water tariffs and subsidies will be done by the state government and the city municipality.

: (i) bringing bulk water to Shimla from a new source on the Sutlej River; (ii) 24x7 water supply and sewage management for Shimla City and; (iii) sewage services for peri-urban areas. It will also support capacity building for the Shimla Municipal Corporation to take on its new role of oversight.

The state has also decided to strengthen the financial sustainability of WSS operations in Shimla where only 12 percent of the costs needed to operate and maintain the WSS system are recovered from customers, requiring the government to provide an average annual subsidy of over US$12 million.

“With a new focus on financial sustainability, the GoHP will now link its subsidies to performance, and will put in place a stringent energy-efficiency program to bring down the costs of pumping water in the hilly terrain,” said Smita Misra, Lead Water Specialist and the World Bank task team leader for the DPL operations. “.”

The $40 million loan from the International Bank for Reconstruction and Development (IBRD), has a 4-year grace period and a maturity of 15.5 years.