NEW DELHI, December 26, 2017: The Government of India, the Government of Tamil Nadu and the World Bank today signed a $318 million loan agreement for the Tamil Nadu Irrigated Agriculture Modernization Project to promote climate resilient agriculture technologies, improve water management practices, and increase market opportunities for small and marginal farmers. About 500,000 farmers, of which a majority are small and marginal, are expected to benefit from improved and modernized tank irrigation systems.

The project will rehabilitate and modernize about 4,800 irrigation tanks and 477 check dams, spread across 66 sub-basins, in delivering bulk water to irrigation systems. 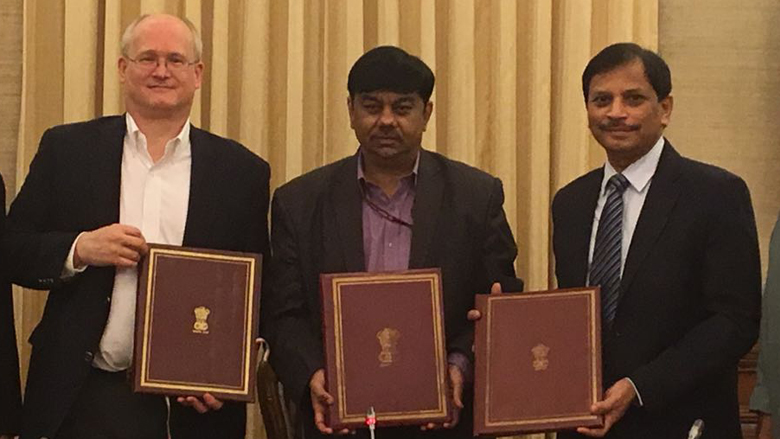 “Tamil Nadu, being a water-stressed state, continues to experience water shortages which are expected to further exacerbate in the future. Rehabilitating and modernizing irrigation tanks will improve the reliability and availability of irrigation water for farming communities, making them less prone to climatic hazards. More than 160,000 ha of currently partially irrigated lands will come into full irrigation under this project,” said Sameer Kumar Khare, Joint Secretary, Department of Economic Affairs, Ministry of Finance.

“This project will help Tamil Nadu scale up its efforts to unlock the full potential of its agriculture sector. It will support farmers improve the efficiency of water used in farming, diversify into high value crops, and produce crops that are resilient to the increasing threats of climate change. Such efforts will be a win-win for all, leading to better use of scarce water resources and raising household incomes of farmers,” said John Blomquist, Program Leader and Acting Country Director, World Bank, India.

Though significant progress has been made during the past decade in crop diversification, still there is scope for achieving a higher level. Paddy is the dominant crop occupying 34 percent of total cropped areas, whereas fruits and vegetables are grown on 11 percent and pulses and oilseeds on 14 percent of total cropped areas. By helping farmers’ access modern technologies, linking them to markets, and providing postharvest management support, the project will enable farmers to shift from a mono crop paddy system to mixed cropping including high-value crops (fruits, vegetables, and spices), pulses, oilseeds, and millets.

To enhance the ability of crops to withstand expected adverse impacts of climate change, the project will support smallholder producers adopt new conservation technologies such as the System of Rice Intensification (SRI) and Sustainable Sugar Initiative (SSI). They reduce average water usage by 35 percent and increase yields by 22 percent per ha. The project is expected to increase the yield of rice, maize, and pulses by 18–20 percent.

“The earlier World Bank-supported project on modernizing irrigated agriculture (TN IAMWARMP), had made significant impacts by modernizing irrigation infrastructure and improving the efficiency of water used for agriculture. This project will bring the policy and institutional developments achieved under the earlier project to a new level, improve farmers’ links to markets, and rehabilitate and modernize high-priority tank irrigation systems in more than 50 percent of the sub-basins of the state, which were not part of the TN IAMWARMP,” said Bayarsaikhan Tumurdavaa, Senior Agriculture Economist, and World Bank’s Task Team Leader for the project.

The project will also coordinate with other World Bank-supported projects in Tamil Nadu and at the national level, including the Tamil Nadu Rural Transformation Project, National Hydrology Project, and National Groundwater Improvement Project to ensure synergy and enhance long-term project impact.

The $318 million loan from the International Bank for Reconstruction and Development (IBRD), has a 5-year grace period, and a maturity of 19 years.