The forum has demonstrated the support to innovation in business in Georgia, the success achieved and next steps yet to be taken. GITA, Innovation and Development Fund, Young Innovator’s Center and other organizations working in the field of business innovation have shared their vision. Representatives of the companies with diverse profiles have showcased respective innovation projects and spoke about their initiatives.  Among the panelists were private companies, such as TBC Bank, WISSOL Group, Geocell, VREX, ACT Global, Start-Up Nest.

The audience has been represented broadly by the business companies, government, civil society and donor organizations, development institutions, academia and think-tanks.

Within the framework of the forum, the Co-Director of the World Development Report (WDR) 2016: Digital Dividends, Uwe Deichmann, has presented to the audience the main messages of this latest report by the World Bank Group.

The new Bank report says that while the internet, mobile phones and other digital technologies are spreading rapidly throughout the developing world, the anticipated digital dividends of higher growth, more jobs, and better public services have fallen short of expectations, and 60 percent of the world’s population remains excluded from the ever-expanding digital economy.

According to the WDR, the benefits of rapid digital expansion have been skewed towards the wealthy, skilled, and influential around the world, who are better positioned to take advantage of the new technologies. In addition, though the number of internet users worldwide has more than tripled since 2005, four billion people still lack access to the internet.

“Georgia is a country where the findings of the WDR 2016 may be particularly applicable and helpful in thinking about a long-term economic development strategy, said Uwe Deichmann. This country has made a number of investments and undertaken critical reforms that have or will put in place many of the enablers to accelerate the development of the digital economy. Investing in basic infrastructure, reducing the cost of doing business, lower trade barriers, facilitating entry of start-ups, strengthening competition authorities, and  facilitating competition across digital platforms are some of the measures suggested in the WDR that can make businesses more productive and innovative.”

“The internet is not a shortcut to development, but it is certainly a major accelerator. We have to ensure continued economic growth by both accelerating innovative activities by our most capable businesses and people, while expanding inclusion into the global innovation and digital economy for those people and businesses - especially in the rural parts of country - that have so far been disconnected, to use the benefits of digital technology in all sectors of society and the economy, said Dimitry Kumsishvili, Vice Prime Minister and Minister of Economy and Sustainable Development of Georgia. Government’s new initiative of “Broadband for All” presents us with the opportunity to create and share prosperity by relying on new sources of growth.”

Georgia is recognized globally as a reformer on business climate, critical to enable competitive markets and private sector-led job creation. There have been significant investments in complementary infrastructures including transportation and energy. The country’s private sector has invested in improving coverage and access to telecommunications, which is essential to connect people and businesses with the Internet and all of its resources. Georgia has also been investing in improving skills among young people.

Although there are many individual success stories, the effect of technology on global productivity, expansion of opportunity for the poor and middle class, and the spread of accountable governance has so far been less than expected. Digital technologies are spreading rapidly, but digital dividends – growth, jobs and services – have lagged behind.

To deliver fully on the development promise of a new digital age, the World Bank suggests deepening and accelerating ongoing activities in Georgia on two fronts: closing the digital divide by making the internet universal, affordable, open, and safe; and strengthening regulations that ensure competition among business, adapting workers’ skills to the demands of the new economy, and fostering accountable institutions—measures which the report calls analog complements to digital investments.

Digital development strategies need to be much broader than information and communication technology (ICT) strategies. To reap the greatest benefits, countries must create the right environment for technology: regulations that facilitate competition and market entry, skills that enable workers to leverage the digital economy, and institutions that are accountable to people. Digital technologies can, in turn, accelerate the pace of development.

Digital technologies can transform our economies, societies and public institutions, but these changes are neither assured nor automatic, cautions the report. Countries that are investing in both digital technology and its analog complements will reap significant dividends, while others are likely to fall behind. Technology without a strong foundation risks creating divergent economic fortunes, higher inequality and an intrusive state.

Over the last decade, the World Bank Group has invested a total US$12.6 billion in ICTs. 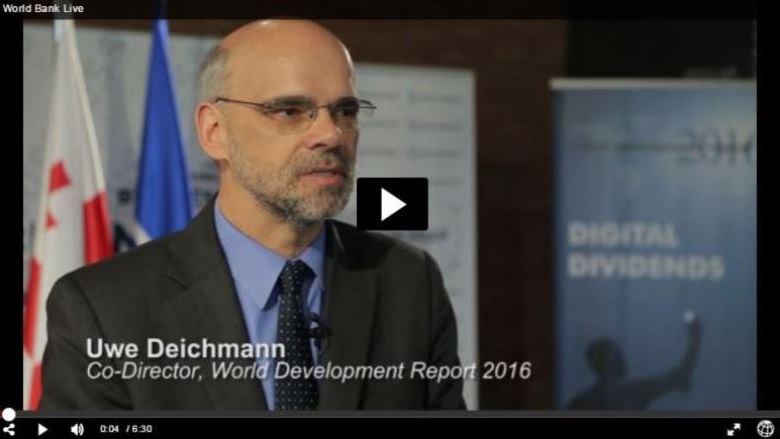