This week, policymakers, business leaders and top academics are gathering for the annual World Economic Forum in Davos, Switzerland. At this year's meeting, under the umbrella of "responsive and responsible leadership", participants will debate rising income inequality, economic anxiety, growing protectionism and the increasing opposition to globalization and the openness that has been a major engine of growth in the past decades, but which has also left large groups of people behind. The meeting takes place against a backdrop of elevated economic uncertainty fueled by policy incertitude in the wake of political changes in 2016 and this year's elections in Germany, France, and other countries, the economies of which together account for some 30 percent of global GDP.

In its recent Global Economic Prospects 2017, the World Bank estimates that global growth slowed in 2016 to a post-crisis low of 2.3 percent, as global trade stalled, investment slowed, and policy uncertainty spiked. A moderate recovery is projected for 2017, with global growth forecast to increase to 2.7 percent, mainly driven by emerging markets and developing economies, in particular the large commodity exporters such as Russia and Brazil.

China, with a projected growth rate of 6.5 percent for 2017, is set to remain one of the engines of global growth in 2017. Although its growth is projected to further moderate 6.3 percent in 2018-19, reflecting soft external demand, uncertainty about global trade prospects, and slower private investment. Macroeconomic policies are expected to continue supporting activity to help smooth the adjustment of output in overcapacity sectors. Policy support is likely to come increasingly from the fiscal side, as government action to reduce the risks of rising leverage take hold. Rebalancing from industry to services, and from investment to consumption, is expected to moderate, as the continued fiscal stimulus supports industry and the lower wage growth of recent months is being reflected in slower consumption growth.

Global growth may yet surprise on the upside, especially if a fiscal stimulus in the United States were to ensue, but downside risks associated with policy uncertainty, protectionist pressures, and the risk of financial market disruptions dominate global prospects.

Rising protectionist sentiments could undermine the growth in trade－an engine of growth in the past that has been sputtering in recent years. Global trade growth in 2016 recorded its weakest performance since the global financial crisis. The structural forces at work are of concern, and they include a slower pace of global value chain integration and increasing trade liberalization headwinds. Maturing global value chains also contributed to lower trade generated for each increase in global GDP. This trend, which had already been observed prior to the global financial crisis, has intensified in recent years. Among major advanced economies, the slowdown in global value chain participation is particularly visible in the United States and Japan. Among the emerging markets and developing economies, China's more mature domestic intermediate production has also contributed in lowering trade intensity of growth. At the same time, most emerging markets and developing economies still have large untapped potential to move up the value chain, by shifting to more complex and higher domestic value-added products, but only if the global trade environment allows for it.

New trade restrictions reached a post-crisis high in 2016. In an environment of weak global trade, stagnant real income gains in major advanced economies, and marked currency movements between major reserve currencies, protectionism has been slowly rising. For example, in 2016, G20 countries have taken more trade-restrictive measures than trade-facilitating ones. Anti-dumping measures, countervailing duties, and safeguards have been the most commonly used instruments in advanced economies, while emerging markets and developing economies have used a broader set of restrictive measures, including import tariffs and export taxes. Without violating current agreements, World Trade Organization members could triple import tariffs, which would lead to a 10 percent drop in world trade, and large welfare losses for the world. Undoing existing trade agreements amid increased protectionism would greatly exacerbate those welfare losses.

Davos is an opportunity to discuss how to turn the tide that is rising against globalization and trade, and China, which is represented at the highest levels of government, can play an important role. China has not only been a major beneficiary of openness and globalization in the past three decades, but in recent years has played a leading role in international trade and development, and a growing role in the global institutions that underpin these. There is much that countries themselves can do to ensure that gains from trade are better shared, and to strengthen support for openness and trade－including improving social safety nets, more investment in people, and active labor market policies that help those working in declining industries to move to more productive occupations. At this point in time, more is needed. Perhaps most important is strong leadership to sustain the international economic system that has benefited the world so much in the past, and to adapt it to current needs and realities. China is among the few countries that is in a position to provide such leadership in today's world.

The author is the World Bank Country Director for China. 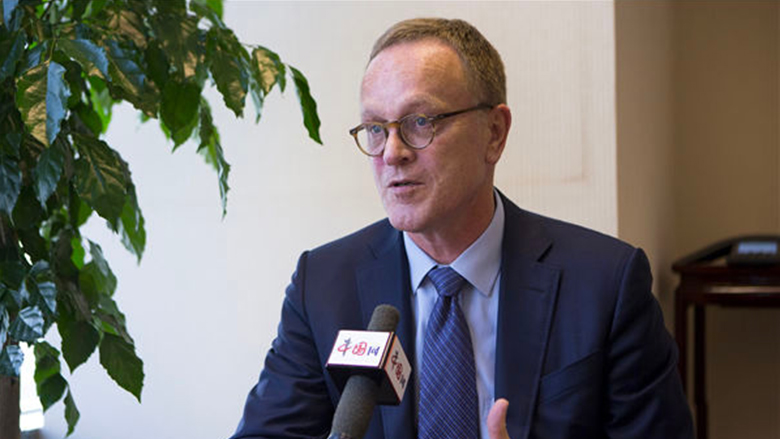