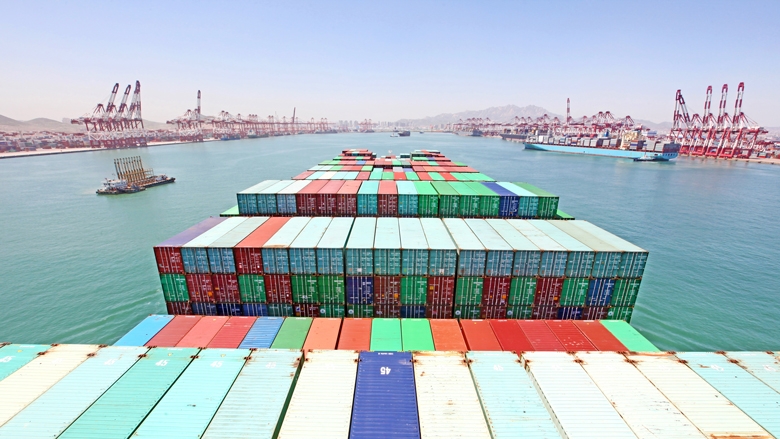 Recent developments: Growth in developing East Asia and Pacific strengthened slightly in 2017 to 6.4 percent from 6.3 percent in 2016. The pickup reflected better-than-expected external conditions—an expansion of global activity and trade, a recovery of commodity prices, and benign financing conditions. The region accounted for more than a third of global growth in 2017, mostly due to China. Investment in the region, excluding China, showed signs of a cyclical upturn following several years of weakness. Trade flows recovered markedly across the region, and regional financial markets remained stable.

Growth in China advanced modestly to 6.8 percent in 2017, mainly due to an acceleration of exports as global demand solidified. China’s economic rebalancing continued, with consumption growing faster than investment and services faster than industry.

Excluding China, the rest of the region as a group picked up to 5.2 percent from 4.9 percent in 2016. The recovery in commodity prices and improved confidence supported activity in commodity exporting countries. Among these, GDP accelerated sharply in Malaysia due to increased private sector spending and rising exports. Also, growth inched up in Indonesia thanks to stronger investment and a pickup in exports.  Among commodity importers, Thailand grew more rapidly after several years of weakness. Vietnam expanded more strongly on the back of solid exports.

Outlook: Growth in developing East Asia and Pacific is projected to ease to 6.2 percent in 2018 and to 6.1 percent in 2019 as a cyclical pickup in the region, excluding China, is offset by that the gradual structural slowdown in China. The region is expected to continue to be a major driver of global growth. Growth in China is projected to slow to 6.4 percent in 2018 as its economic rebalancing from investment to consumption proceeds and as credit growth decelerates. Growth in the rest of the region is expected to accelerate to 5.3 percent this year as commodity exporters continue to experience a cyclical rebound.

Among commodity exporters, Indonesia is projected to accelerate to 5.3 percent this year as private consumption strengthens in line with wage gains. Growth is seen moderating in Malaysia to still-strong 5.2 percent as investment growth moderates slightly.

Commodity importing economies are expected to see positive growth as well. Thailand is projected to see growth advance to 3.6 percent in 2018 from 3.5 percent as merchandise exports and tourism strengthen. Vietnam is seen growing 6.5 percent in this year after 6.7 percent in the year just ended, supported by robust agricultural production and strong export-oriented manufacturing.

Risks: Risks to the outlook have become more balanced but are still tilted to the downside. Geopolitical tensions in the Korean peninsula could negatively affect confidence and trigger financial instability. A faster-than-expected tightening of financing conditions or a steeper-than-expected slowdown of major economies, including China, could exacerbate existing financial vulnerabilities. These vulnerabilities include elevated domestic debt, large external financing needs, and limited policy buffers. Increased projectionist sentiment in advanced economies, particularly the United States, and policy changes resulting from Great Britain’s departure from the European Union, would deepen uncertainty about established trading and investment relationships.

Stronger-than-expected growth among advanced economies, and further strengthening of investment could lead to faster-than-anticipated growth in the region. 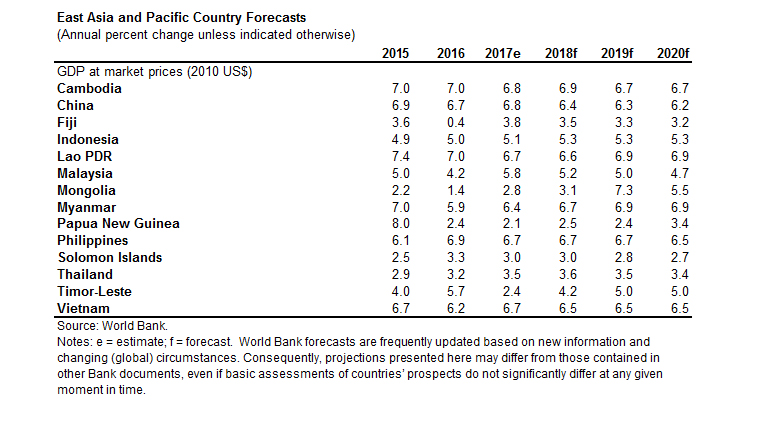