The World Bank, together with partners, implemented a pilot project to provide a diverse set of solutions to the challenges thousands of families living in the metropolitan area of Santa Cruz city face to have access to safe sanitation. 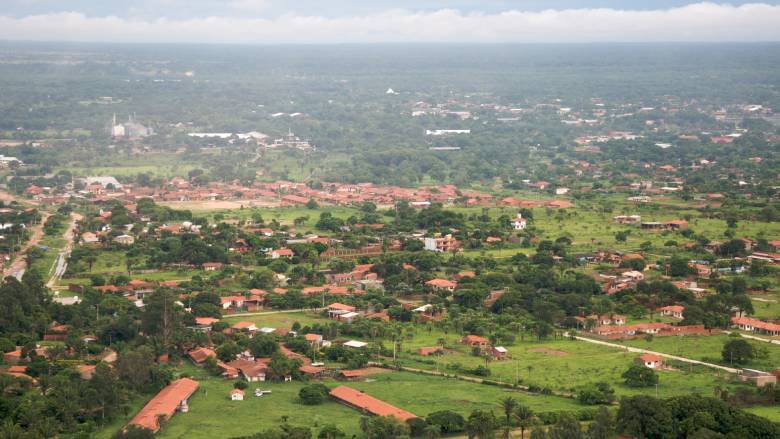 The metropolitan area of Santa Cruz city is located east of the Andes mountains in the tropical lowlands of Bolivia.

Located east of the Andes mountains in the tropical lowlands of Bolivia, the metropolitan area of Santa Cruz city is home to two million people and nearly one-fifth of Bolivia’s population.  But despite being Bolivia’s wealthiest city, many households in Santa Cruz still suffer from poor access to sanitation.

While 49% of households have access to sewerage systems; 182,088 households, mostly living in the peri-urban areas rely on on-site sanitation, mainly septic tanks. Rapid population growth has made it difficult for the national government, municipalities and service providers to provide sanitation through sewerage networks.

In 2016, as part of the World Bank’s support in strengthening the delivery of sustainable water and sanitation services for the most disadvantaged in Bolivia, a three-year pilot project kicked off to improve urban sanitation in Santa Cruz city.

With support from the Global Water Security and Sanitation Partnership (GWSP) and its Citywide Inclusive Sanitation (CWIS) initiative, as well as the Deutsche Gesellschaft für Internationale Zusammenarbeit (GIZ), the pilot focused on improving conditions of decentralized sanitation. The results of the pilot informed the development of Bolivia’s National Strategy for Wastewater Treatment and contributed to developing alternative models for improved and safe operation and maintenance of decentralized sanitation. The pilot project helped produce guidelines, protocols and training courses to support the safe collection, transport, and treatment of fecal sludge in Santa Cruz city.

Moreover, the pilot helped lay out the challenges thousands of families living in the metropolitan area of Santa Cruz city face to have access to safe sanitation. In August 2019 the Municipal Government of Santa Cruz city issued its Municipal Law on Wastewater and Sludge Management, which specifically established requirements to properly manage household fecal sludge.  And the environmental authority – the Santa Cruz Departmental Government – updated the administrative procedures to issue operational environmental licenses for the small entrepreneurs working in the collection and transport of fecal sludge. 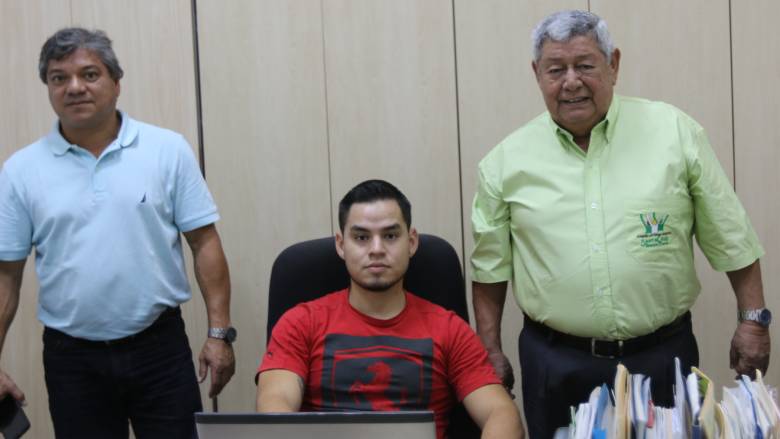 Ingeniero Ramon Roca (right), Director of the Water and Sanitation Projects Supervision Unit in the Municipal Government of Santa Cruz, with his staff.

“Santa Cruz's growing population is something that cannot be stopped. Every day, more and more people arrive, making a living here. This is where our work comes in,” says Ingeniero Ramon Roca, Director of the Water and Sanitation Projects Supervision Unit in the Municipal Government of Santa Cruz. “The solution we propose is to implement an alternative sanitation system to meet the needs of the fast-growing areas where a traditional sewerage system may not work.” 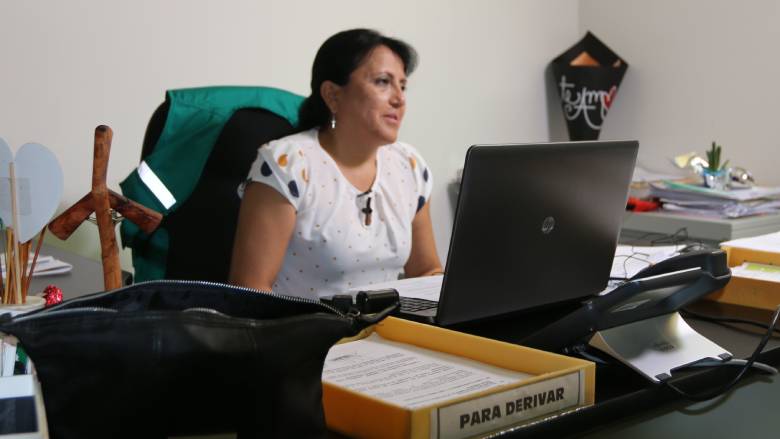 Ericka Plata, Head of the Environment Unit of the Santa Cruz Regional Government, in her office.

The Bank assisted in multiple analyses to help evaluate how best to address the sanitation challenges of the metropolitan region.

“Thanks to the diagnostic study we conducted with the support of several institutions,  we were able to accurately determine the sanitation needs and shortcomings of Santa Cruz, mainly in the peri-urban areas.  We identified issues and provided solutions for the entire sanitation chain, from the origin itself, or containment, to transport and treatment, until the final disposal,” says Ericka Plata, Head of the Environment Unit of the Santa Cruz Regional Government. “It was a very positive experience.  In working with the World Bank, we were able to integrate all the necessary players. That was the key: the integration of the principal stakeholders.” 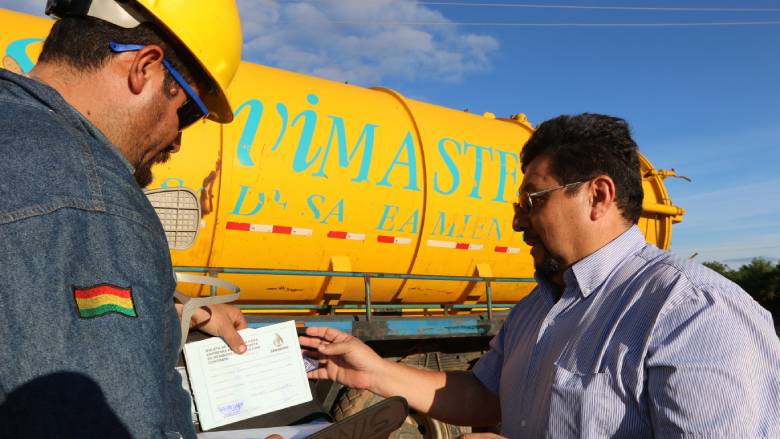 Marco Salinas, the President of the Association of Wastewater Cleaning and Transportation Enterprises, talks with his employee.

The initiative also developed operating procedures and training for entrepreneurs and their employees. Marco Salinas is the President of the Association of Wastewater Cleaning and Transportation Enterprises and runs a sanitation service company himself. “Santa Cruz is not a small town anymore and we need good services and environmental regulations – these are all essential. Above all, Santa Cruz needs companies that can offer quality of service.  It’s not enough to have the tools and equipment to reach clients, but it’s also important to deliver the services, to respond to demands from the customers themselves, and to fulfill good expectations.”

Salinas praised the World Bank’s efforts in helping to organize and share ideas and knowledge with entrepreneurs like himself.

Without the acknowledgement of shared responsibilities from all parties, any initiative to improve the management of decentralized sanitation would not be successful. That is why the project is actively engaging various stakeholders. 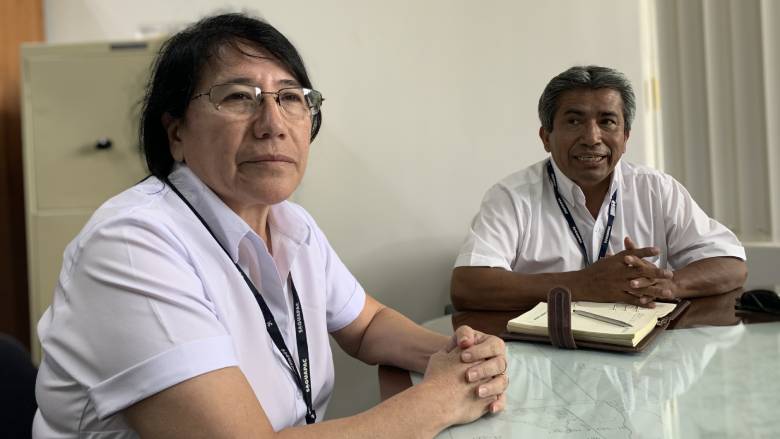 “When we look at fecal sludge management, we find different points of view, all of them with an important proposal and level of participation.  The World Bank has made an important contribution articulating those missing links, such as transport, treatment, and currently, reuse, an initiative which has become our most recent goal,” says Tito Calvimontes, Manager at SAGUAPAC.

Ever since the pilot demonstrated impressive results, other municipalities in the Santa Cruz Region, including Cotoca and La Guardia have joined the project.  The mayors of those towns have both expressed support for the initiative, citing public health concerns and the need to expand access to services. 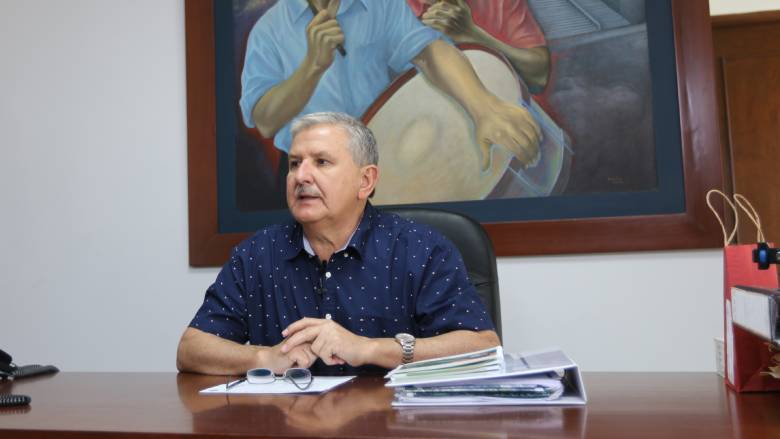 Jorge Morales Encinas, Mayor of the Municipality of La Guardia, in his office.

“It's integral to public health to care about sanitation, sewerage systems, and water pollution. If we don't care, or don't take it seriously, we'll continue to get sick. Children will most certainly get parasites, sickness, stomach aches, and general discomfort. It's part of preventative health to be concerned,” says Jorge Morales Encinas, Mayor of the Municipality of La Guardia, which has 146,208 inhabitants. 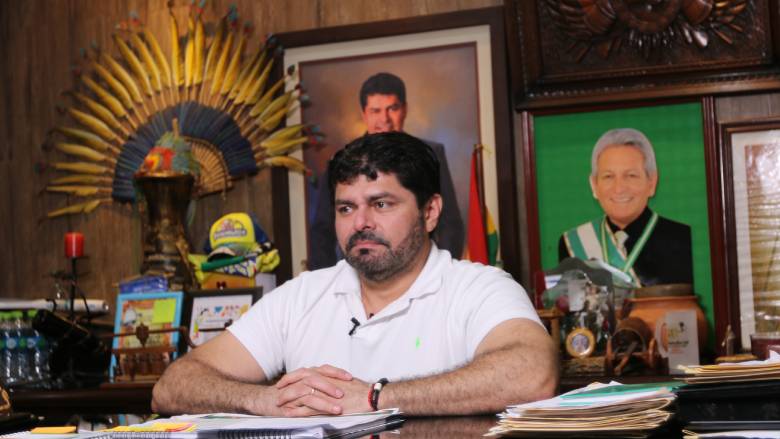 Wilfredo 'Coco' Añez, Mayor of the Municipality of Cotoca, in his office.

Wilfredo 'Coco' Añez, Mayor of the Municipality of Cotoca, with a population of 56,541 inhabitants, sees the lack of sanitation access as a problem that must be solved and is already placing high expectations on his administration.

“Within our municipality, currently only 15% of the population has basic sanitation and sewer coverage. We want to continue to expand access, with the goal of providing basic sanitation to 80% or 90% of the people,” he says. “We hope the World Bank can continue helping Cotoca, Santa Cruz and Bolivian citizens to reach the goal that every municipality expects to fulfill.” Raul Alvis Claudio, a Parliament member in Cotoca, echoes the mayor’s sense of urgency. “In Cotoca municipality, few people have sewerage system service,” he says.  “But now we have a complete project, a macro plan, designed together with the World Bank.   The next step in the process will be to procure investments, to implement and fulfill our plan.”

It quickly became apparent that tackling the problem in these areas would require a diverse set of solutions uniquely tailored to their urban environments.  “Because there is no single or simple solution to the urban sanitation problem, a promising way to achieve this undertaking was through citywide inclusive sanitation (or CWIS) planning,” says Alfonso Alvestegui, a Senior Water Supply and Sanitation Specialist with the World Bank, based in Bolivia. “Since 2018, we started to work on developing comprehensive approaches for both centralized and decentralized systems, solutions for the cities’ onsite sanitation facilities and their sewerage systems, and institutional issues in these intermediate cities.”

As part of the efforts, the intermediate cities of Cotoca, La Guardia and Montero are developing their own sanitation plans following the CWIS approach. The water supply and sanitation service providers (known as Water Cooperatives) in these cities are already reaping benefits.

“The World Bank's support has been very helpful for the cooperatives here in La Guardia municipality.  We participated in workshops and received information from professionals with high standards. They taught us how to take care of our groundwater and surface water resources to prevent environmental contamination,” says Orlando Orosco Garcia, La Guardia Water Operator Chief. 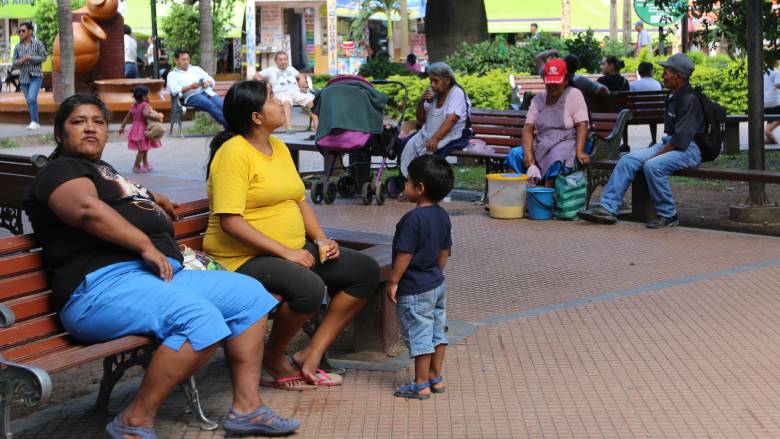 A park in the center of Cotoca.

A thriving urban economy is not possible without safe sanitation.  Ensuring access to sanitation services will make cities safer and improve citizens’ health and well-being. Safely managed water, sanitation, and hygiene (WASH) services are also an essential part of preventing and protecting human health during infectious disease outbreaks, including the current COVID-19 pandemic. One of the most cost-effective strategies for increasing pandemic preparedness, especially in resource-constrained settings, is investing in core public health infrastructure, including water and sanitation systems. Good WASH and waste management practices, that are consistently applied, serve as barriers to human-to-human transmission of the COVID-19 virus in homes, communities, health care facilities, schools, and other public spaces. 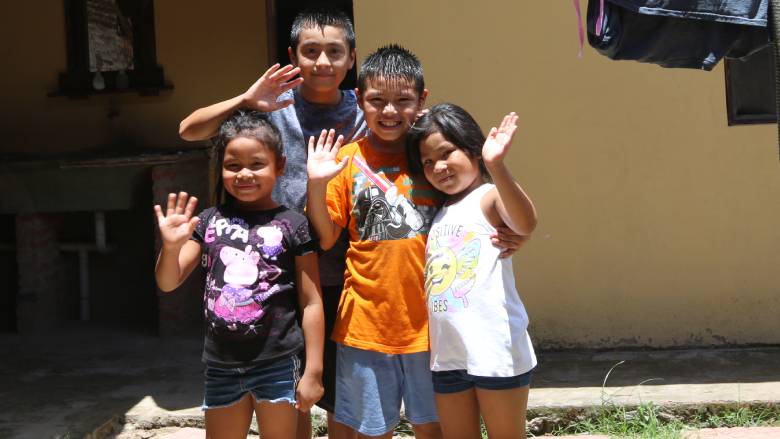 A family in La Guardia.

By working with national and sub-national governments, the water regulator, municipal governments, water utilities, the private sector and other partners, the World Bank will continue to strengthen the institutional environment and capacity to achieve inclusive services in Santa Cruz, as well as in other Bolivian cities.