From Food Insecurity to Innovative Agriculture 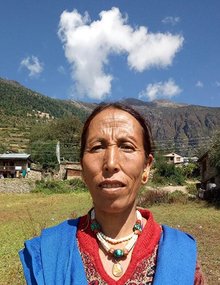 Karsangma Lama, from Burungshe in the remote district of Humla in North Western Nepal, recalls her early life as being full of hardship. Born into a very poor family, Karsangma does not remember going to bed with a full stomach when she was small. When she was seven, she lost her brother, and then lost her mother when she was 10. Her father remarried and her family became a large one with 10 children.

Her life was especially difficult during winter with little food to survive on. “It was as if we were cheated by everything. There was bad weather, with six months of snow-covered fields from November, and therefore opportunities for development were limited,” Karsangma says, “But I don’t remember anybody complaining about anything. Everybody accepted it as fate.” Karsangma never went to school as her grandmother wanted her home to collect fodder and firewood.

Karsangma recalls how her uncle used to travel for months on foot, with up to 200 goats. The goats carried goods which he traded in Taklakot (across the Chinese border) and to Achham, both more than 25 kilometres from their home village. With this money, he purchased rice for the family. Karsangma joined her uncle three times, and remembers it as a difficult journey across the mountains. “The food they brought back would not last even two months for a family of 12. We were just trying to find means to stay alive,” Karsangma said. “The hardships my family endured cannot be explained in words.”

When she married at 20, she thought her life would improve. However she found it was no better in her husband’s extended family, where she had to take care of 12 family members. There was never enough food. Life became even more difficult after she gave birth to three sons she struggled to feed, and so Karsangma and her husband separated from the husband's extended family. "I could survive without eating,” she says, “but as a mother, I was not prepared for my children to go through the same ordeal. My husband and I decided that we should do something and started looking for options.”

Karsanga learnt that there was a new organization in her village training farmers on food security and livelihoods of farming communities, through the promotion of biodiversity-based ecological farming and through building skills and capacity of farming families. At that time, women did not leave their homes and talk to strangers, but she recounts how her husband encouraged her to participate in the training, saying, “We both are illiterate and we don’t know anything. You are much wiser than me, so why don’t you go and learn what they are teaching ?” Through the support of her husband who also took care of their new-born child, she was able to attend training classes on greenhouse technology. It took her a lot of courage to stand against the community and to ignore the criticism she received from attending the classes.

Karsangma used her training to later introduce greenhouse technology in her farming community. It was not easy at first because there was no plastic available in the local market, she could not get seeds from the District Agriculture Office, and there was no infrastructure such as roads and irrigation, to enable her to introduce the farming technology in her community. However, once the District Irrigation Office provided drip irrigation system in her village, she was able to start to introduce the technology.

She has since been successful in making three villages ‘chemical fertilizer-free areas’, after being involved in a movement to protest against free use of urea. Today, she earns NRs. 300,000  ($1= Nrs 113) a year selling okra, beans, tomatoes, cabbage, eggplant, cauliflower, radish, pumpkin, coriander amongst other vegetables. Before, she and her husband used to produce just potatoes and mustard greens only for two months, but now they are able to produce all kinds of vegetables throughout the year.

Karsangma also encouraged the women from three villages in her community to practice innovative farming and today all women grow enough vegetables to sell in Simikot, the district headquarters, as well as to export to other districts. Karsangma has also been involved in the construction of an 8-kilometer fair-weather road that links her village to Simikot, and she is hopeful that this road will help expand her agriculture business.

For the last five years, Karsangma has been the president of a women's saving and credit cooperative, and the women using innovative agricultural technology are also its members. “Two women from the Dalit community have also become the members, even though they said that they might not have enough money regularly to deposit. But I have lowered the mandatory amount for them,” Karsangma says. “While the other members deposit NRs. 1000 per month, the Dalit women deposit NRs. 200,” She adds, “Having a little income of our own makes women strong and economically empowered.”

"Having a little income of our own makes women strong and economically empowered"
Karsangma Lama
Farmer, Humla
Api