Yuan Xiaoli, a resident of China’s southern Guangdong Province, caught a cold when the temperature suddenly dropped to 4 degrees Celsius. Using the Guangdong Social Security app on her smartphone, Xiaoli made a doctor’s appointment at the Yingde People’s Hospital. She saw the doctor at the scheduled time, got some medicine for her cold, and settled her medical bill via the app.

Luo Shujun and his wife, Lan Xiuying, retired in 2002. Every year since then, they had to visit the local social security office for survival verification. Today, thanks to Guangdong Social Security’s app for face recognition, they can prove their status from home.

Both mobile payments and biometric verification are part of a social security integration project supported by the World Bank in Guangdong Province.

A pioneer in China’s reforms, Guangdong has not only the country’s largest economy, but also the largest number of migrants of any province. In 2013, out of its 106 million population, there were about 31 million migrants including 18.7 million from other provinces and the rest moving to other cities within the province.

In recent years, Guangdong has been moving away from traditional low-cost manufacturing to more knowledge-intensive goods and services. This structural shift has resulted in a growing demand for skilled workers. However, movement across prefectural boundaries within the province and beyond incurred significant welfare costs, as pension portability could not be assured, the mechanism for reimbursement of insured health services was inefficient, and access to employment and other services was limited.

China has five types of social insurances: retirement pensions, medical, unemployment, work-related injury and maternity. In the past, social security systems were fragmented, both across individual social insurance programs, and spatially across and within provinces even within individual programs.

The Guangdong Social Security Integration Project, launched in 2013, is addressing these issues with a new integrated provincial management and information system. “It will enable people to enroll, make contribution and benefit from social insurance programs, no matter where they live,” said Li Cuiling, director of the provincial project management office.

“It’s designed as a centralized and integrated system,” explained Liu Xuewu, a deputy director of the information center responsible for the development of the system. The system has integrated data management across its major business lines including social insurance, employment services and human resources management and across the 21 prefectures in Guangdong province. It means that social security and employment services could be accessed anywhere in the province and independent of the person's household registration. 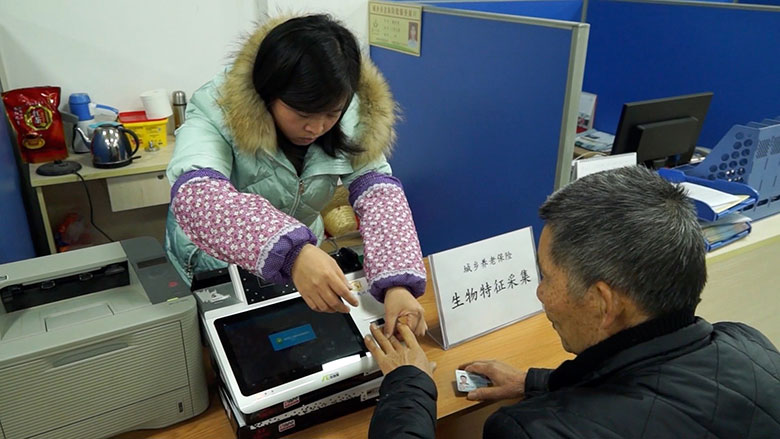 The system was first piloted in Qingyuan, Guangdong’s largest prefecture-level municipality. In the Yingde People’s Hospital in Qingyuan, the QR code of Guangdong Social Security can be seen everywhere. Patients are encouraged to scan the code and install the app on their mobiles since it reduces registration time, and allows them to pay for treatment on their phone instead of waiting in long queues, and also view their test results from anywhere.

Direct settlement across cities allows patients enrolled in the medical insurance system to be reimbursed for inpatient expenses, no matter where they are treated. They only need to pay their out-of-pocket portion. Before the system was set up, inpatients had to return to the cities where they were enrolled to be reimbursed.

When residents need to visit local social security offices, they have also encountered a streamlined system with better customer service. One-stop counters have replaced the traditional separate counters, so people can go to any counter for any insurance service, and can also access or print their social security statements on the self-service terminal. Records are now kept electronically.  Documents are scanned and filed so that people no longer need to submit hard copies on their future visits. A person’s ID number gives access to all of their files and documents at once.

Guangdong provides an interesting model as China works to develop a national integrated social security information system. The Ministry of Human Resources and Social Security now facilitates workshops and study tours to share the province’s experience with the rest of the country.

Li Cuiling is very optimistic about the system’s potential benefits. “It will reach townships and villages and connect the last mile service delivery. It is very important, and is the first of its kind in China,” she said.

With this successful pilot Guangdong Province plans to scale up the integrated provincial management and information system to 10 more cities in 2018, and to the entire province by 2020, benefiting all the urban and rural residents enrolled in social insurance programs.