Skip to Main Navigation
This page in:_
FEATURE STORY December 7, 2017

About two hours’ train ride from Beijing, in the south-west of Shandong Province, are Qufu and Zoucheng. These cities are the hometowns of Confucius and Mencius - two great philosophers of ancient China. The temple, cemetery and family mansion of Confucius in Qufu, collectively known as “San Kong” (three Confucius sites), were listed as a UNESCO World Heritage Site in 1994.

The Confucius Temple in Qufu was first built in 478 BC., shortly after his death. It was destroyed and reconstructed a number of times over the centuries.  The existing temple was rebuilt and renovated during the Ming (1368-1644) and Qing (1644-1911) dynasties. With yellow tiles and red walls, the temple complex resembles the Forbidden City in Beijing, and ranks as the second largest historical building complexes in China.

The Mencius Temple in Zoucheng dates back to the year 1037 in the Northern Song Dynasty. The current building was reconstructed around the year 1672 during the Qing dynasty after it was destroyed in an earthquake. Near the temple is the Mencius family mansion and cemetery.

Weathering took its toll on the ancient Confucius and Mencius temples and related historical buildings, as shown by leaking roofs and damaged ceilings, slanting and unstable walls and pillars, damaged color paintings on woods, broken stone tablets, and ancient trees infected with diseases and insects.  Urgent actions were required to conserve these cultural monuments and relics and prevent them from further deterioration.

Supported with a US$50 million loan from the World Bank, a US$130 million project was launched in 2011 to enhance cultural heritage conservation and tourism services in Qufu and Zoucheng.

“It is the first world heritage protection project using international financing for both China and Shandong,” said Zhou Xiaobo, a deputy director of the provincial cultural relics bureau and head of the project management office.

The conservation plan included renovation of cultural heritage sites and buildings related to Confucius and Mencius, renovation of historic sites in the Lu Old City and Ming Old City, and infrastructure upgrading in the old towns.

Mount Ni, the birthplace of Confucius and location of a temple dedicated to the father of the sage and an ancient academy, experienced the largest-scale restoration since the Qing Dynasty. It won a national prize for cultural heritage conservation top ten in 2013.

Conservation work was also extended to thousands of ancient cypress trees. Plans were tailor-made for each of them that included propping, pruning, holes repairing, insects and diseases treatment, and installation of ID plates.

The Old City of the State of Lu, a state founded in the Zhou Dynasty in the 11th century BC., still has ruins of the ancient city wall and moat, palaces and residential sites, roads and irrigation systems. Work was undertaken to protect these historic sites, and add new wooden walkways, rest areas and sanitation facilities for tourists, making it a new national archeological park.

In the Old City built in the Ming Dynasty, a historic courtyard-style mansion and the county “Yamen” - the county office building - were selected for overhaul, with repair to the roofs and walls, re-flooring and repainting of the wooden structure.

Traditional methods, craft skills and materials were used in the conservation and restoration of all historic buildings and relics.  All these methods and skills were also carefully recorded for future reference and use.

Residents in the old cities of Qufu and Zoucheng are direct beneficiaries of infrastructure upgrading that included repaving of roads, renovation of water and sewerage systems, and environmental cleaning, which has significantly improved their quality of life.

Clean water was diverted Sihe River to the moat of the Ming Old City in Qufu, creating a pleasant public space for residents and visitors. The Yinli River in Zoucheng was dredged and cleaned up, with its banks reinforced and trees planted. The stinky canal became a green linear park where people come to enjoy the waterfront. As a result, the number of small businesses along the river, such as restaurants, homestays and shops, has doubled, generating jobs and incomes for local residents.

Visitors to Qufu and Zhoucheng are also direct beneficiaries from improved tourist information and services, including new electronic tour guide systems, multi-lingual signage boards, tour maps and other tourist facilities.  The Zoucheng Museum, upgraded and refitted to highlight Mencius, enables visitors to gain a better understanding of the sage’s life and thinking with help of multimedia and other modern technologies.

A total of 2,349,000 people, including residents and tourists, benefitted from the project. 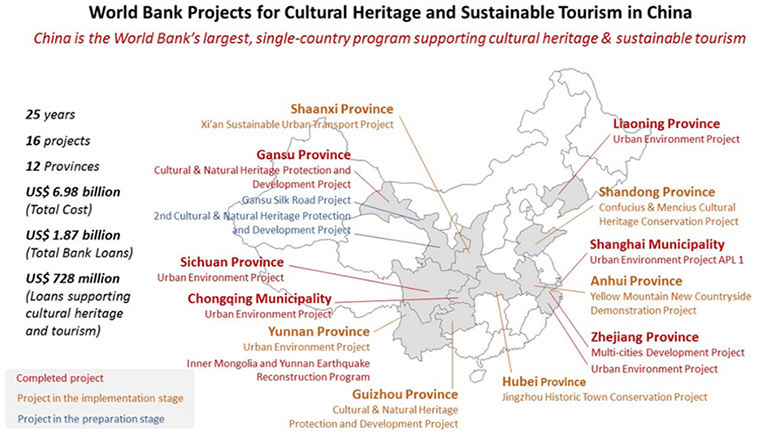