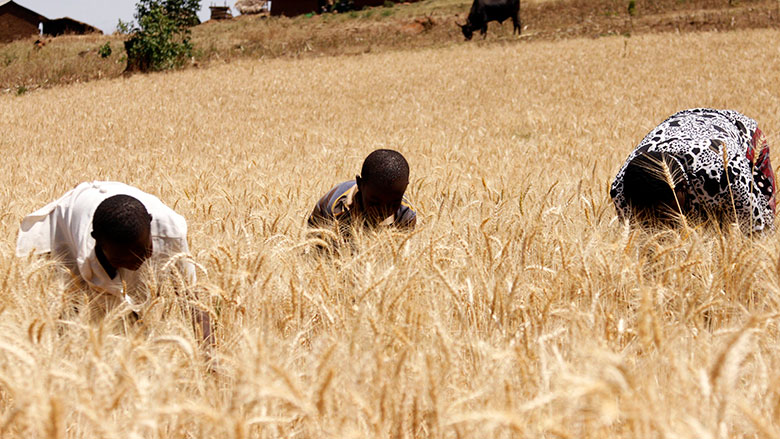 1.What is the current state of the Uganda economy?

The Uganda economy has recovered. Real gross domestic product (GDP) growth rebounded strongly to 6.1% in FY17/18, up from 3.9% the previous fiscal year. The rebound was largely driven by a pick-up in investments and exports, and on the back of strengthened credit to the private sector and good weather. Consequently, services, particularly information and communications, sustained strong growth, and food crop production recovered. In per capita terms, however, this rebound translates into a 3.1% growth rate, because of the rapidly growing population. Moreover, the heavy reliance on rain-fed and subsistence agriculture drives the volatility in economic growth at the margin, with spillover effects on export earnings, and a considerable impact on the poor’s income.

2.What is the outlook for the economy?

While the growth outlook for Uganda looks positive, risks are tilted to the downside. Real GDP growth is projected at around 6%, driven by an anticipated increase in investments, especially to support developments in the oil sector. However, the positive economic expectations could dissipate if political tensions were to escalate. Continued reliance on rain-fed and subsistence agriculture remains a downside risk, while failing to rein in current spending could jeopardize Uganda’s macroeconomic stability and worsen debt vulnerabilities. The latter could be further aggravated if Uganda’s export performance were to be negatively impacted by continued volatility in key export markets such as the Democratic Republic of Congo (DRC) and South Sudan.

3.Why the focus on developing Uganda’s agri-food system?

Uganda’s agriculture sector plays a critical role in the economy. It accounts for 70% of the country’s employment, provides more than half of all exports, and is about one-quarter of GDP. The government has defined agriculture as a key economic sector in Uganda’s transition into a middle-income country and, in this regard, has emphasized the importance of value addition, commercialization, and building resilience to climate change. Uganda’s broader agri-food system also has the potential to provide significant employment opportunities for the country’s predominantly young population.

To realize agriculture’s potential, however, the country will need to overcome a range of challenges in relation to agriculture productivity and vulnerability to sector-related risks. National agricultural output has grown at only about 2% per annum over the last five years, which is well below the population growth rate and below the 3-5% growth rates in other East African countries.

4.What are the main recommendations?

To boost the transformation of Uganda’s agri-food sector, critical policy weaknesses need to be addressed and institutional coordination improved. To enhance the productivity of primary production, access to and the adoption of high-quality agricultural inputs is essential. This requires a strengthening of regulatory measures, land tenure security, enhanced input quality controls, and fully implementing ongoing extension reforms to increase focus on knowledge transfer.

Given increasing climate variability and pest outbreaks in Uganda, it is vital to increase the resilience of agricultural systems and rural livelihoods. To this end, farmers should be equipped with climate-smart land, water and livestock management practices, irrigation infrastructure, and access to climate and disaster-risk information. Producer arrangements and integration into agri-food value chains should be supported to increase farmers’ access to finance and markets and the competitiveness of the sector more broadly. Reaping the full benefit of observed sector trends will, finally, require strengthening institutional processes and stakeholder coordination, as well as steering public agriculture investments towards the provision of public goods such as research, extension, and infrastructure.

5.How is the World Bank positioned to support Government of Uganda priorities in agriculture?

Agriculture is a core theme of the Country Partnership Framework (CPF) FY16-21 agreed between the World Bank Group and the Republic of Uganda. One of three strategic focus areas is raising incomes in rural areas with objectives to increase agricultural commercialization and enhance the resilience of the poor and vulnerable. The Bank believes that boosting agricultural productivity and increasing commercialization of agriculture and developing a rural non-farm sector that is more productive and pro-poor, are critical to sustainable development and achieving the poverty reduction targets of second National Development Plan.

In support of the government’s Agriculture Sector Strategic Plan, the Bank finances operations that are implemented by the Ministry of Agriculture, Animal Industry and Fisheries (MAAIF) and its agencies, including those that aim to: (i) improve agricultural productivity through research; (ii) promote the use by farmers and their organisations of quality agricultural inputs and modern agricultural technologies; and (iii) improve post-harvest handling and market access. Other operations work to reduce the vulnerability of rural households that are dependent on agriculture and livestock for their livelihoods.