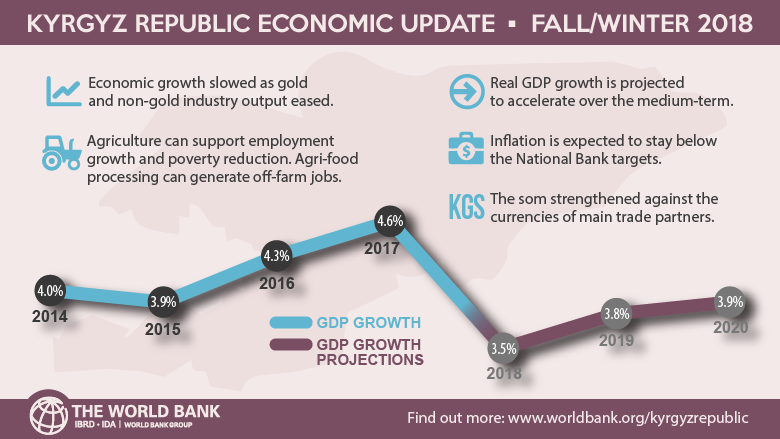 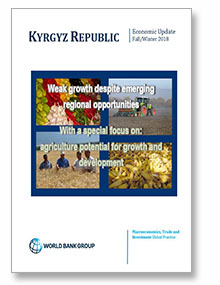 The fall/winter 2018 edition of the biannual Kyrgyz Republic Economic Update outlines the economic situation in the country as well as the medium-term development prospects.

Real GDP growth slowed to 3.1 percent during January-November 2018, down from 3.7 percent in the same period during 2017. This deceleration was the result of slower growth in both gold production and the non-gold industry.

Export performance remains weak, largely on account of a sharp slowdown in gold exports, and in spite of trade opportunities within the Eurasian Economic Union.

Recent developments point to limited progress in addressing structural issues over the past few years.

While the Kyrgyz Republic was able to avoid an external shock-driven recession in 2014-15, the economy remains vulnerable to external economic shocks given its high dependence on an undiversified export base, workers’ remittances, and foreign aid.

The fiscal position has improved with a strong tax revenue performance and cuts to capital outlays. This has helped to keep public debt under control following a sharp increase in 2014-15. With inflation pressures low, the monetary policy stance remains relaxed.

The National Bank reduced its policy rate by 25 basis points to 4.75 percent in May 2018 to support economic growth, and has maintained a managed float of the exchange rate.

Going forward, real GDP growth is forecast to accelerate slowly to 3.9 percent by 2020, supported by all the major sectors – industry, agriculture, construction and services. On the demand side, growth is projected to be driven by private consumption, investment and exports.

The economy will continue to benefit from large remittance inflows and firming external demand. Strong remittances will support average consumption growth of around 3 percent in 2018–20. However, the current account deficit is projected to remain elevated at about 9 percent of GDP, reflecting structural constraints, the significant import content of public investment, and an indirect feed-through effect of remittances via imports.

To rebuild fiscal buffers, the authorities are committed to reducing the deficit to 3 percent of GDP by 2020.

Realizing the potential of high-value agri-food exports is the cornerstone of the new government’s policy objectives for agriculture development. The new government has declared that its priorities for agriculture sector development will be promoting high-value agri-food production and organic agriculture, improving the quality and safety of agri-food and orienting assistance to producers of those groups of agricultural products (such as selected fruits and vegetables, legumes, dried fruits) that have potential to generate high value-added in export markets.

To realize the government’s objectives, the following three-track approach is recommended:

This approach would require more proactive government policies that would address constraints faced not only by farmers but also by agri-food processors and exporters. In other words, addressing market failures along the entire food value chain. Doing so would help overcome the fragmented and small-scale structure of farms and agricultural firms, bringing the Kyrgyz agri-food sector to a new level of development.