December 12, 2014
Implemented between 2009 and 2013 and through investments in improved water supply, wastewater collection and treatment, and solid waste management, the 2nd Shandong Urban Environment Project helped provide safer drinking water for some 730,000 people in eight cities including 340,000 in fluoride-affected areas. It contributed to a better environment and improved the health of nearly 4.17 million people in the province, and reduced pollution discharges to the Bohai Sea.

Shandong Province, the second most populous province of China with a population of more than 92 million people in 2007, was one of the fastest-growing provinces in the country. Situated on the east coast, it has a 3,000 km coastline with the Bohai and Yellow Seas, both of which drain a major part of the province.

However, Shandong faced infrastructure deficiencies in its fast growing smaller cities including:

The project was designed to improve the environmental conditions in participating municipalities and counties through a package of measures including upgrading and development of wastewater collection and treatment facilities, river embankment rehabilitation, solid waste management, water supply improvements, industrial pollution monitoring, and enhancement of the financial performance and efficiency of key urban utility companies.

A grant provided by the Global Environment Facility (GEF) supported the development of a pilot septic-tank management system in Yantai to reduce land-based pollution along the Yantai coast and the Bohai Sea, and the dissemination of the Yantai model in Shandong Province and in other parts of China.

Implemented between 2009 and 2013, the project achieved the following outcomes:

The Bank provided a loan of $147 million to finance investments in water, wastewater and solid waste facilities, and GEF provided a grant of $5 million to demonstrate septic management techniques to help reduce land-based pollution reaching the Bohai Sea.

The World Bank worked closely with the Shandong Provincial Government during project implementation. The latter’s commitment and support was the key to the project’s success. In addition to financing 49.5% of the total project costs, the government maintained a strong environmental management agenda, provided high quality project management and coordination of implementation in project cities and counties, and set guidelines for minimum wastewater and solid waste tariffs to be adopted by municipal governments. It continued to give priority to industrial pollution control, enhanced its capacity for online monitoring of industries, and promoted water conservation through regulatory measures to limit use of groundwater and re-use of treated wastewater.

After completion of the Second Shandong Environment Project, all the water supply, wastewater and solid waste companies in the project cities continue using the practices introduced including preparation of annual budgets for operation and maintenance of the facilities and annual financial statements including projections, while the Sichuan Provincial Government adheres pursues the policy for increasing financial autonomy of wastewater companies. 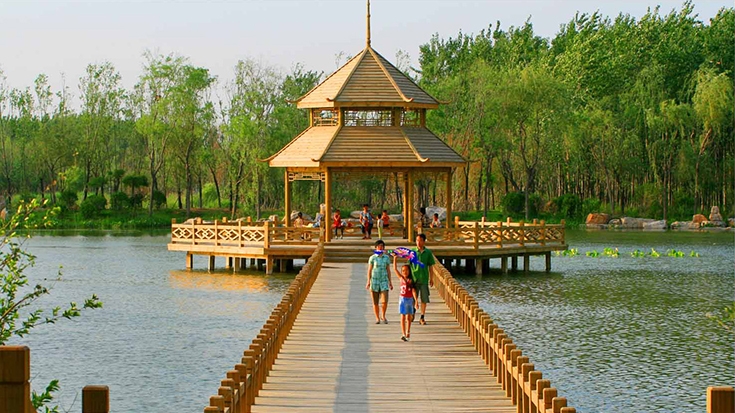