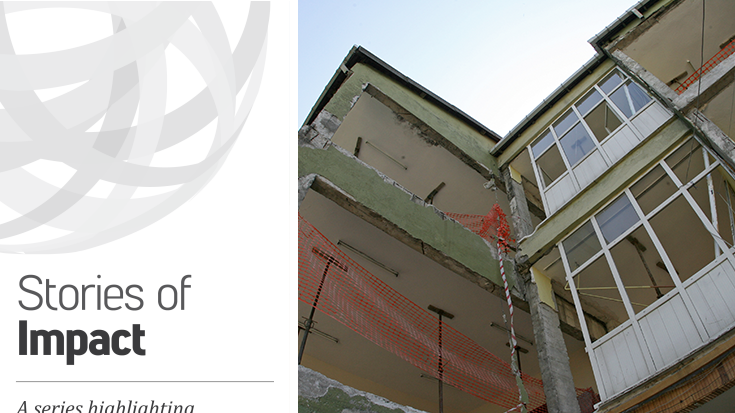 Located on the vulnerable North Anatolian Fault, Istanbul is highly prone to earthquakes. The city’s high population and commercial and industrial density mean that frequent earthquakes can cause significant economic losses, damage, and human suffering.

To protect the city from this risk, in 2005, the Governorship of Istanbul, with support from the World Bank and the Global Facility for Disaster Reduction and Recovery (GFDRR), launched a comprehensive program to help the city prepare for and respond to earthquakes.

In 1999, the 7.1 magnitude Marmara earthquake shook northwest Turkey, killing more than 17,000 people and causing $5 billion in damage. The earthquake significantly damaged Istanbul’s infrastructure. A major economic center and home to 15 million people, Istanbul is vulnerable to earthquakes that can have devastating consequences on the economy as well as human lives.

To reduce damage from disasters like Marmara, the Istanbul Seismic Risk Mitigation and Emergency Preparedness Project (ISMEP) was conceived in 2005 to enhance preparedness, strengthen critical infrastructure, and improve institutional and technical capacity for disaster risk management and emergency response.

GFDRR provided technical and advisory support to the $1.2 billion ISMEP project, which includes $550 million in World Bank financing. To reduce seismic risk, the project pioneered an innovative approach that combined: risk reduction investments such as the reconstruction of public buildings; broader programs including public awareness campaigns; and investments that strengthen disaster response. Project activities focused on:

Setting up a strong, highly knowledgeable local team is key to successful implementation. Projects have greater chances of success when they are implemented by local authorities, engineers, and managers with experience working on earthquake reconstruction projects, and who have extensive knowledge about city and national regulations. The ISMEP program established a Project Coordination Unit as an independent team of experienced local experts to fulfill financial and technical requirements for the projects.

Increasing public awareness is critical to build public support for upgrading schools. While schools are being retrofitted, students will be required to temporarily relocate to other students. To gain public support for the retrofitting of schools, seminars, and trainings were prepared for students, parents, teachers, and administrative staff to inform them of the benefits of the changes once schools are upgraded.

Building on the lessons learned from ISMEP, the Government of Turkey plans to continue to expand the disaster risk management agenda to other high-risk areas of the country. In this context, the Government will develop a National Disaster Risk Management Program (NDRMP) which will serve as a multi-stakeholder platform providing guidance to a wide range of institutions for preparing risk reduction projects. The program will facilitate funding from a wide range of sources, including the national budget, international financing institutions, and the private sector. The lead agency for this program will be the Disaster and Emergency Management Presidency (AFAD).

" The ISMEP project’s holistic approach addresses many aspects of disaster management, including softer elements such as public awareness. Through this project, we have made great progress in Istanbul that would have been otherwise difficult. "