Supporting Recovery and Reducing Vulnerability to Natural Disasters in Haiti 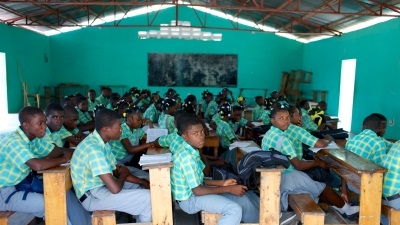 In 2005, Haiti was emerging from a period of political conflict. The country was facing tremendous development challenges, including high exposure and vulnerability to natural hazards. Widespread poverty, extensive deforestation and overall land and watershed degradation further exacerbated the country’s vulnerability.

Although the project was prepared as an emergency project, it aimed to balance structural and non-structural interventions to address the country’s high vulnerability to natural disasters. The structural interventions focused on the rehabilitation of drainage and irrigation systems, schools, health clinics and community centers affected by flooding—initially in Fonds-Verrettes, Belle-Anse and Gonaïves. After the additional financing in 2008, the project supported similar interventions in other departments.

The non-structural interventions focused on strengthening the institutional capacity of the Directorate of Civil Protection and the Permanent Secretariat for Disaster Risk Management as well supporting local risk management. At the local level, the Bank’s supported the Government’s efforts to move from the ad-hoc nature of community engagement in disaster response and preparedness towards a more productive systematic approach to community engagement. The Bank used the community driven development approach to establish communal civil protection committees and implement small-scale risk mitigation works.

The main results achieved include the following:

Following the clearance of arrears in early 2005, the Government was ready to receive support. The Emergency Recovery and Disaster Management Project was the first Bank funded project prepared since 1997. The total cost of the project was US$19.4 million; US$12.0 million under the original project and US$7.4 million under the additional financing approved in 2008. This funding was distributed among reconstruction and risk reduction in areas affected by floods, institutional strengthening and local risk management.

There was a close and strong collaboration with other development partners supporting the disaster risk management agenda in Haiti, in particular with United Nations Development Programme, the Inter-American Development Bank (IADB), the Office of U.S. Foreign Disaster Assistance, and the European Union, which ensured their efforts were complementary. These partnerships exploited synergies among partners and avoided duplication of efforts. Moreover, the project’s convening role and close partnerships provided an important framework that is expected to continue to guide multilateral engagement in the disaster risk management area.

A new grant aims to consolidate gains in the area of local risk management and institutional strengthening. The approval of this grant has allowed for a smooth transition and ensured continued support to the communal civil protection committees established by the project. The Bank is also strengthening the national policy dialogue to advocate for a stronger Civil Protection Directorate (DPC) and to support the reform of the national disaster risk management system, while exploring ways to integrate disaster risk management in an upcoming development policy operation.

The project’s main beneficiaries were the people affected by the 2004 floods. Residents of the affected regions of Belle-Anse, Fonds-Verrettes and Gonaïves benefited from the rehabilitation of affected public infrastructure. The project also targeted the communities where communal civil protection committees were established and government staff were working with the project implementing agencies.