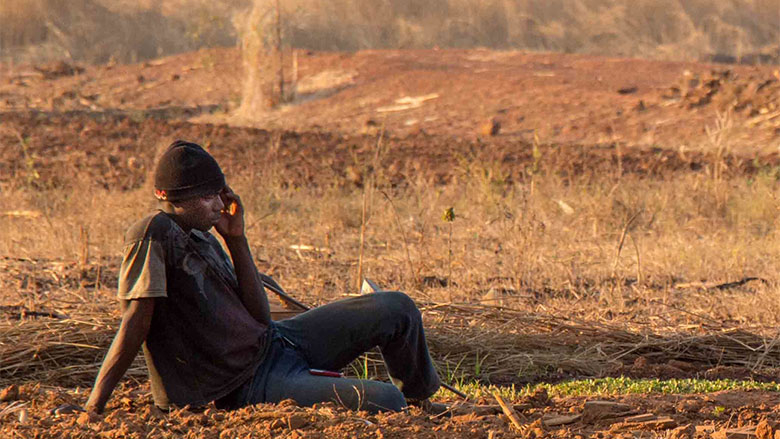 BAMAKO, May 2, 2017-Although the world is in the third stages of the ICT revolution, it has yet to reach most people in Sahelian countries—such as the Central African Republic, Chad, Mali, Niger and Guinea—the World Bank Group’s AFCW3 region, where only 64% of the population has an active, mobile ICT connection, compared to 71% in Sub-Saharan Africa as a whole, and 95% worldwide.

In many low-income countries, the overall growth of ICT can be attributed to the rapid expansion of affordable cellular services. But success in ICT does not simply follow mobile phones. Success follows when users find ways to make money because of their access to telecommunications. 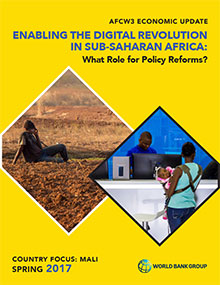 Enabling the Digital Revolution in Sub-saharan Africa: What Role For Policy Reforms?
A report on the economies of countries in Africa’s Sahel focuses on a lack of access to information and communications technology, and comes up with ways of remedying it.

All AFCW3 countries embarked on revamping their legal and regulatory frameworks for telecoms from 2011 to 2015 to bring them up to date with broadband internet, virtual mobile operators, service providers, and best regulatory practices. Second generation ICT laws—covering data protection, e-commerce, and cybersecurity–have also been introduced.

But the main reason for a lack of universal access to mobile phones is affordability. People use mobile phones to call other people, but they also them for money transfers and payments.

AFCW3 countries urgently need to address the unfinished first wave of ICT sector reforms.  These aim at affordable universal access to mobile voice and text services as a key enabler in the successful development of mobile money and broadband internet services. Priorities focus on: (i) improving competition ahead of the takeoff of broadband internet markets; (ii) using USF resources to serve the uncovered; and (iii) implementing transparent, efficient fiscal policy to generate a fair share of the revenue for public authorities to use under a pro-growth agenda.

Aside from mobile internet access, our Regional Country Update also focuses on Malian agriculture and how it can reach its full potential in “dryland agriculture.”

The dryland zone of Mali stretches west to east from Kayes to Gao, through Mopti to the border with Niger, and includes south of Gao and Koulikoro in the south. One third of Mali’s poor live in that area; they are greatly affected by higher temperatures and lower rainfall of climate change. Yields for the major crops, millet and sorghum, have almost stagnated for three decades, even though our findings suggest potential payoffs from intervention to promote soil improvements, such as organic fertilizer, as well as better seeds, extension advice, pesticides, and market access.

And although agricultural productivity may be constrained by virtue of geography, there is still unexploited agricultural potential in the drylands that could be used to boost rural income in the short-term and provide families the choice to continue farming in the region or migrate.

Overview of the Countries’ Economic Landscape

Central African Republic (CAR): Democratic elections in February 2016 put an end to years of political volatility, and violence eased. Real GDP has begun to recover gradually, following its 2013 collapse. Donors responded by pledging over $2 billion at the Brussels Donor Conference in November 2016 to support the government’s new Recovery and Peace-Building strategy. The short-term outlook remains vulnerable to any temporary deterioration in the security environment, however, which, together with delayed public investments, translated into slower growth for 2016. While the government, with IMF program support, continues to make progress in tackling imbalances in the external and fiscal accounts, CEMAC’s very weak external position may further increase consolidation and structural reform pressures.

Chad: Chad’s macroeconomic crisis was triggered by persistent low oil prices that led to a deep recession, as well as to the serious depletion of fiscal and external positions. The government has responded with a substantial fiscal adjustment; however, its external and fiscal deficits remain high. This situation points towards an increase in the poverty rate. The medium-term outlook remains challenging, with a stagnation of real GDP growth in 2017, and gradual recovery dependent on how oil prices evolve. Ambitious reforms in the areas of fiscal sustainability and economic diversification are needed to tackle this crisis.

Guinea: The Guinean economy is slowly recovering from the Ebola pandemic and commodity price slowdown that have affected the country in recent years. Driven by mining and agriculture, growth is estimated to have returned to 5.2% in 2016, compared to 0.1% in 2015. It is expected to level out in the medium-term. Key risks include continued low commodity prices, potential macroeconomic slippages, and challenges in protecting pro-poor spending.

Mali: Growth remained robust in 2016 at 5.4% driven by higher public investment and a solid performance in all sectors owing to favorable weather and improvements in the business climate. The economic outlook is positive with projected, robust GDP growth, a sizable decline in fiscal and current account deficits, and subdued inflation. It is nonetheless subject to downside risks, linked mainly to fragile security, governance issues, and climate. Mali’s economy is projected to grow by around 5% annually over the period 2017–19, reflecting a return to normality and a gradual tapering off of the recent surge in international aid. All economic sectors are expected to make a positive contribution to growth, albeit in varying magnitudes.

Niger: Growth gathered momentum in 2016, standing at 4.7% despite security threats, persisting low commodity prices, and trade shocks. Although the economy gained strength in 2016, and fiscal and external current account deficits declined, challenges remain. This includes sustain growth while continuing the process of fiscal consolidation in spite of shocks. Poverty is projected to decline only modestly over the medium term owing to moderate per capita growth.