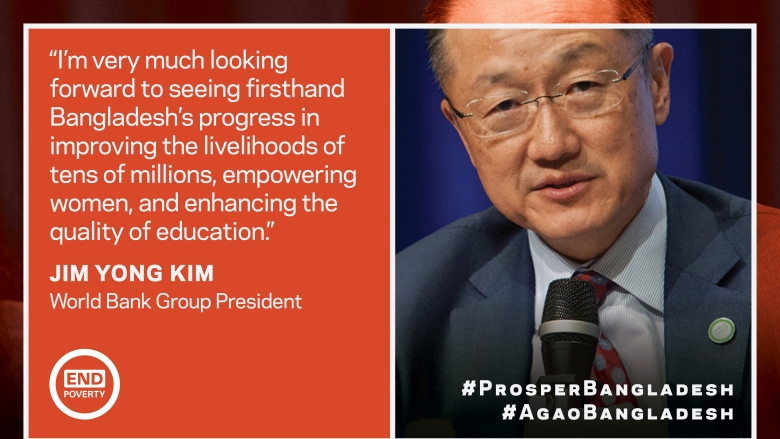 DHAKA, October 3, 2016 –Bangladesh has done an impressive job in reducing poverty over the last decades and has the potential to end extreme poverty by 2030 if it takes firm steps to make growth more inclusive to benefit all Bangladeshis.

“I’m very much looking forward to seeing firsthand Bangladesh’s progress in improving the livelihoods of tens of millions, empowering women, and enhancing the quality of education,” Kim said. “Many developing countries in the world can learn important lessons from Bangladesh to reduce extreme poverty and to promote sustainable development.”

“The fruit of Bangladesh’s development experience in innovations such as conditional cash transfers, gender equity in education, and successful family planning is being reflected in its notable reduction of poverty and improvement in the lives of its citizens,” said Qimiao Fan, the World Bank’s Country Director for Bangladesh, Bhutan, and Nepal. “As a steadfast partner with Bangladesh since 1972, we are committed to supporting the country in increasing shared prosperity to overcome extreme poverty and other development challenges within a generation.”


However, the reports also show that the country is currently the 64th poorest out of the 154 countries and much remains to be done. The development update stresses increasing resilience to security, financial, and trade shocks along with weaker than expected global trade and growth.

To move to the next level and realize its goals of becoming a middle income country by 2021 and overcoming extreme poverty by 2030, the country needs to sustain its economic and remittances growth, create more and better jobs, focus on energy and transportation infrastructure, and make progress on improving the quality of health and education.

“Bangladesh needs to continue creating enough jobs to employ the 2 million young people who enter the job market every year. This requires boosting productivity and foreign and domestic investment by reforming business regulations, reducing infrastructure and energy deficiencies, while enhancing financial efficiency,” said Zahid Hussain, Lead Economist and Author of the Bangladesh Development Update. “The country could also increase its resources to make much-needed investments and become a leader in environmentally sustainable development through a well designed and implemented carbon tax.”

The World Bank Group and its partners were among the first to join Bangladesh’s nation-building efforts in 1972 with the International Development Association (IDA), the World Bank’s fund for the poorest countries, providing $23.78 billion in cumulative commitments as of June, 2015, representing 29.5 percent of total overseas aid commitments to Bangladesh for the same period. Bangladesh is currently the largest recipient of credits from IDA.